The Pitch: It’s been 26 years since Wes Craven pumped a shot of adrenaline into the well-worn slasher genre with 1996’s Scream, which poked fun at the tired conventions and repetitive tropes of stabby horror staples while still holding up as thrilling, bloody examples of the form.

There’ve been four sequels since, each innovating on the formula in one way or another — Scream 2 ruminating on the nature of sequels, Scream 3 on concluding trilogies, Scream 4 on the years-later followup — through Craven’s keen eye for balancing the entropy of franchises with keen horror audiences’ awareness of the same. Now the series moves forward with the succinctly-titled Scream, the first without Wes (this new film is dedicated to his passing), and one that goes full-tilt into horror movie metacommentary, perhaps to its detriment.

It starts, as it always does, with a phone call: jaded teen Tara (Jenna Ortega, as strong here as she was in the as-yet-unreleased SXSW darling The Fallout), alone in her house, talking to a mysterious stranger who suddenly starts taunting her about horror movies. “I’m more into elevated horror,” she bites back, citing A24 fodder like The Babadook that’s more focused on theme than grisly jump-scares.

Predictably, she’s attacked (the ubiquity of cell phones and home security systems in 2022 turn out to be mere speedbumps for Ghostface’s rampage), but unpredictably, she survives; her estranged older sister Sam (Melissa Barrera, In the Heights) comes back to Woodsboro to look after her, dorky boyfriend Richie (Jack Quaid) in tow.

But this family reunion kicks off yet another Ghostface rampage, which Sam, Richie, Tara, and Tara’s close-knit friend group (including Dylan Minnette, Once Upon a Time…. in Hollywood‘s Mikey Madison, and the twin nieces of Randy Meeks, Jasmin Savoy Brown and Mason Gooding) get wrapped up in. To help flush out the killer once and for all, they’ll have to consult some experts: Ghostface veterans Sidney Prescott (Neve Campbell), Dewey Riley (David Arquette), and Gale Weathers (Courteney Cox). 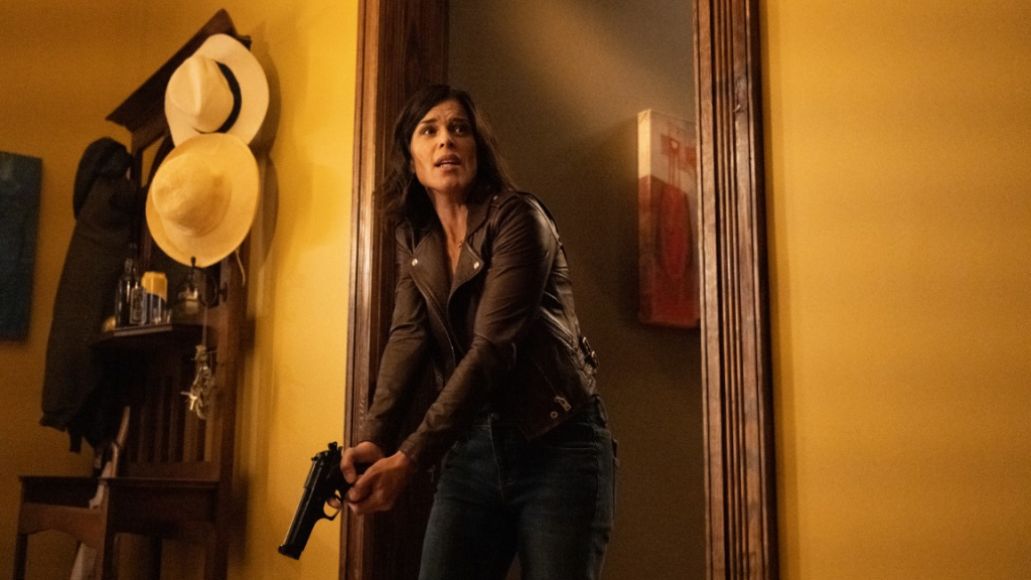 Here We Go Again: You see, this iteration of Scream, as its media-savvy Gen-Zers are all too happy to tell you, is a “prequel” — a decades-on sequel that has one foot in the past and one in the future, kicking off a new iteration of the story while paying homage to the original characters that came before. Think The Force Awakens, David Gordon Green’s Halloween, Terminator: Dark Fate. Scream understands its role as a pass-the-torch update, complete with the obligatory return of aged, but committed players like Campbell, Cox, and Arquette.

But that comes with it a delicate tightrope act, especially for a series that’s prided itself on being winkingly aware of its own conventions. James Vanderbilt and Guy Busick’s script does its level best to keep up with the kind of rat-a-tat dialogue Kevin Williamson brought to the series, and it nearly gets there.

But where it excels in wit, it suffers in structure, sagging under the weight of its legacy obligations. There’s a film here about a prodigal sister returning to make amends for the family she left behind, reconciling a bloody lineage with the person you want to be; but then that collapses when it’s time for another winking reference to the past, or a discussion about the fact that it’s winking at the past at all.

In essence (and in dialogue, really), Scream all but comes out and admits that it’s really about relitigating that most divisive of “requels,” The Last Jedi: The in-universe Stab series, based on the “real-life” events in Woodboro, has spawned seven sequels at this point, and characters whine about how the most recent one disrespected their childhoods by throwing away existing canon and taking wild swings. “It was directed by that guy who did Knives Out,” one character points out, giving away the game completely.

But Is It Scary? Pearl-clutching about the predictability of slashers and all, a Scream movie still lives or dies on its actual scares, and this latest installment frustratingly comes up short when it’s time to really deliver the goods. It’s a shame, too, since directors Matt Bettinelli-Olpin and Tyler Gillett (last seen drenching Samara Weaving in buckets of crimson corn syrup in the raucous Ready or Not) seemed the perfect standard-bearers for a series like this. Granted, there are some innovative kills here and there: gooey prosthetics show us what happens when a knife goes through a throat, and we learn that hand sanitizer and stovetops are never a fun mix. One delightful sequence winks at the horror-film convention of faking out whether a killer’s behind an opened door by repeating it to the point of absurdity.

But eventually, the film has to end up where it has to end up, with a familiar location and a million different fakeouts as the characters, now well aware of the conventions of the series, ding each other for running off by themselves or letting another person walk behind them. The script approaches some interesting material (when you’re suspicious of everyone around you being the killer, how long before loyalties truly start to fracture?) but zags back into tedious convention before it threatens to get too interesting. One rule they don’t quite get around to mentioning in this one: the creepiest-looking people in the cast are always the killer.