Suffocation will return to the road on their 2022 North American “Forces of Hostility” tour with direct support from fellow death metal pioneers Atheist.

The extensive itinerary kicks off May 26th in Brooklyn, New York, and runs through a June 25th date in Clifton, New Jersey. Soreption and Contrarian will open most shows. Tickets go on sale Friday (January 14th) at noon ET for most dates and can be purchased via Ticketmaster.

“We are beyond stoked to return to the road with the ‘Forces of Hostility North American Tour 2022’! exclaimed Suffocation guitarist Terrance Hobbs in a press release. “We’ll be joined by our good friends and brothers in metal Atheist as well as the technical metal powerhouse Soreption and death metallers Contrarian! This will be our first tour back in almost three years due to COVID so we are eagerly awaiting the stage and all our fans to blow off some well-awaited steam!”

As Hobbs mentioned, Suffocation haven’t been on the road since the support tour for their 2017 LP …of the Dark Light (though they did offer up a live disc last year to tide us over). The legendary New York band continues to proliferate the brutal/technical styles of extreme death metal that it helped pioneer in the early 1990s.

Also representing that era, Florida’s Atheist will be on tour for the first time since late 2019. They haven’t released new music since 2010’s Jupiter, so fans can expect a healthy dose of cuts from their classic trio of early ’90s albums.

Ex-Suffocation frontman Frank Mullen sings “Entrails of You” at his own wedding reception: Watch

* = Suffocation and Atheist only
^ = no Contrarian 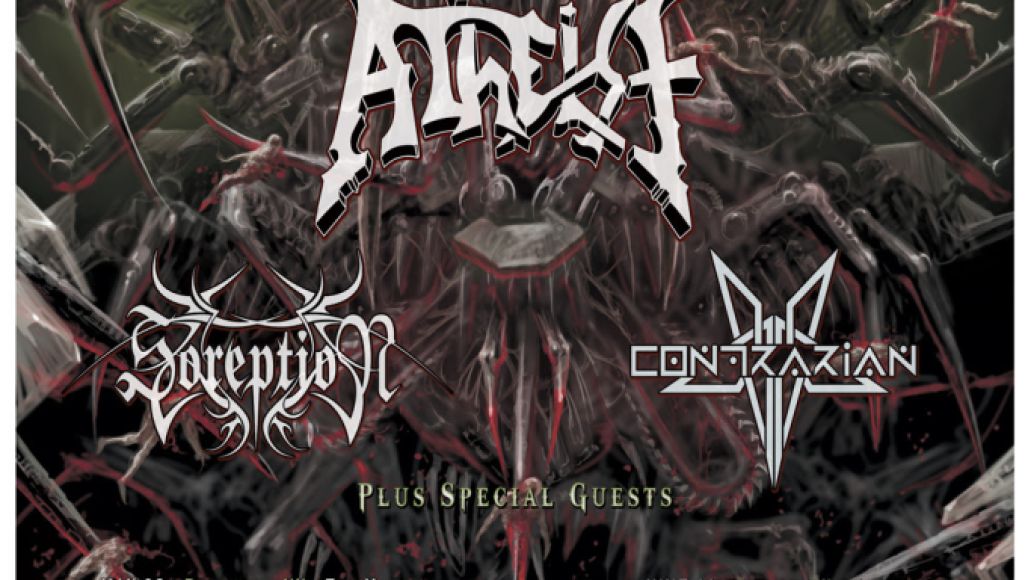