The Smile, the English trio formed by Radiohead’s Thom Yorke, Jonny Greenwood and Sons of Kemet’s Tom Skinner, officially became audience-tested as they completed their first run of in-person performances over the weekend (January 29th-30th) with three shows in just over 12 hours.

The trio convened at the Greenwich venue Magazine London for three consecutive concerts at 8:00 p.m., 1:00 a.m., and 11:00 a.m. GMT, which were simultaneously broadcast with time zone considerations for virtual audiences watching in Europe and Africa, the Americas, and Asia and Australia, respectively.

The venue’s rounded central stage was packed to the edges with an array of gear and sound equipment that promised a more elaborate set than the relatively spare setup for their surprise debut at the Glastonbury Festival Live At Worthy Farm livestream event in May 2021.

That visual promise was fulfilled in spades, as the band ran through an hour-plus setlist that showcased both their collective and individual versatility, marked by constant instrument swapping, massive genre and tonal swings, and the welcome introduction of synths to the trio’s arsenal. Most importantly, the months between appearances have seemed to help fill out the group’s nascent catalogue to a robust, LP-length set, though a release date for their debut album has not yet been announced.

Along with every tune from their Glastonbury set, the trio introduced four new, original songs as well as several unreleased, reworked Radiohead and solo Thom Yorke rarities, including “Open The Floodgates” and “Skrting on the Surface,” appropriately re-spelled for its postmodern revamp. 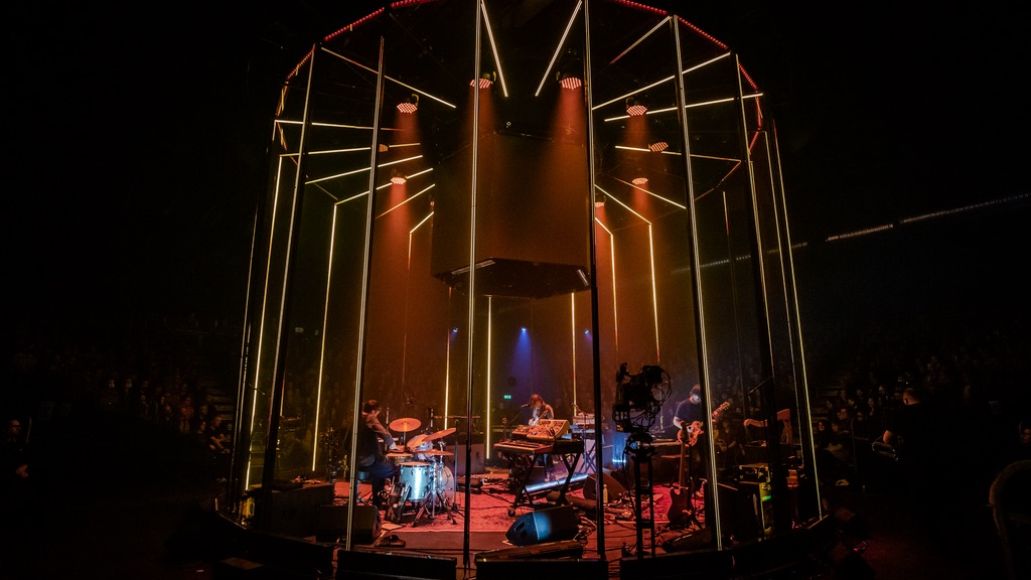 Though the few familiar tracks from The Smile have been brushed up since their last live outing, the set was more defined by all the shiny new tricks the band has honed. Most notably, Skinner spent a considerable amount of time away from the drum kit to work the wires on the synthesizer in what often became a three-fold chorus of simultaneous synths. Greenwood displayed his typical penchant for bass-playing with a bow string, but also managed the feat of multi-tasking on piano and harp at the same time during the early set debut of “Speech Bubbles.”

The setlist remained the same for all three shows, but the performances offered their own unique rewards to each audience. Whether it was the varying levels of playful engagement between Yorke and the London crowd, the occasional embellishment or improvisation, or the remarkable, ever-increasing precision from the bandmates throughout, lucky viewers of the entire series witnessed the blossoming of The Smile as a live force.

Each livestream opened to a handwritten greeting addressed to the show’s targeted time-zone audience along with an accompanying small doodle that reflected the local audience’s, and perhaps the band’s, mental state, starting with a shocked and anticipatory reaction face, then a maniacal, cross-eyed grin for the after-midnight crew, and finally two saggy, bloodshot eyes for the morning show. 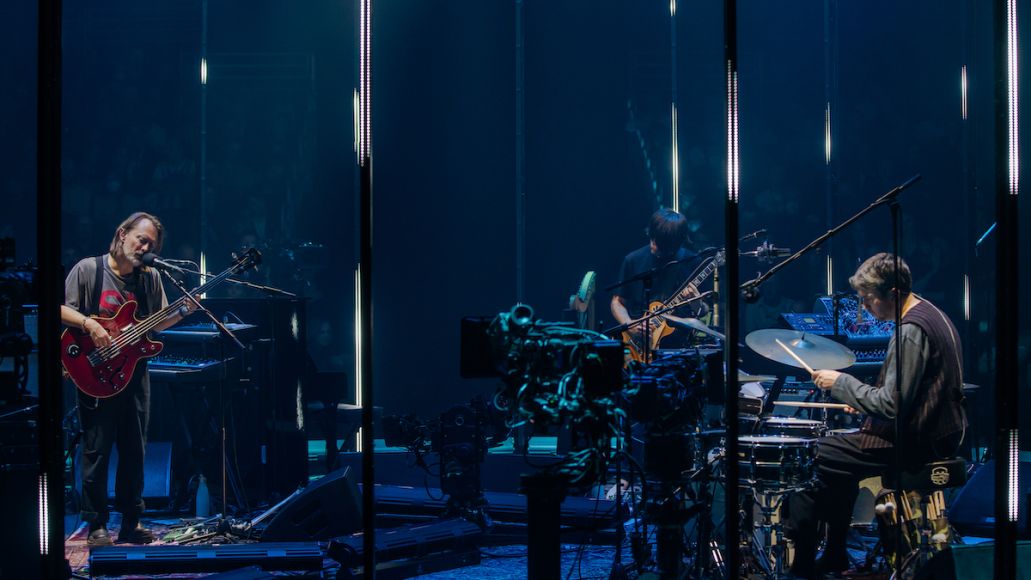 The three lads entered under a black-and-white filter as actor Cillian Murphy’s pre-recorded recitation of English poet William Blake’s “The Smile” tips its hat at the possible origin of the band’s name, while further expanding on Yorke’s initial explanation during their Glastonbury set when he described it as “the smile in the guy who lies to you everyday.”

Thom Yorke & Jonny Greenwood Take The Smile for a Round in 24-Hour, Three-Show Concert Series: Recap