The War on Drugs, led by frontman and founder Adam Granducial, has built their reputation on recorded music and live shows which incorporate an intense level of attention to musical detail. Soaring, rhythmic melodies and atmospheric instrumentals weave together 1980s synths with 1970s classic guitar licks, melding with lyrics to form whole musical cloth that makes you imagine at times being in a giant pile of floofy pillows, then raised to anthemic heights and floated gently down to a soft landing.

In late 2021, Granduciel completed a three-year effort to release a new album, I Don’t Live Here Anymore, achieving critical acclaim and being heralded as one of the best of the year — high praise for a band whose last effort nabbed the 2017 Grammy Award for Best Rock Album.

With COVID protocols firmly in place, The War on Drugs kicked off their “I Don’t Live Here Anymore” tour on Wednesday (January 19th) with the first of two sold-out shows at ACL Live in Austin, Texas.

Many fans were curious as to how changes in Granduciel’s personal life might reflect in his music and performance — and the outcome is that it’s all positive, with increased band collaboration and noticeable development in both lyrics and vocals. Granduciel was vocally stronger than he’s ever been and seemed relaxed onstage, surrounded by a plethora of pedals in a literal ring of light.

He mentioned that they were missing Anthony LaMarca, and included LaMarca’s song “Reconciliation Part 2” in the set. Though much of the band remains the same (Dave Hartley, Charlie Hall, Jon Natchez and Robbie Bennett), Eliza Hardy-Jones joined on keyboards/synths and guitar, and long-time tour manager Craig McQuiston contributed guitar on “Pressure.”

The band played their new album all the way through — including the first live performances of “Wasted” and “Rings Around My Father’s Eyes” — along with past favorites. The band seriously elevated the performances from the recordings (and probably from previous concerts), with extended instrumentals and guitar solos, receiving thunderous applause and multiple thanks from the stage from Granduciel.

Many of the tracks — especially “Harmonia’s Dream” and “Under the Pressure” — received an extended treatment, witht he live versions building into walls of instrumental sound around Granduciel’s shredding guitar solos. Visually, the show was similarly amazing, with the stage bathed in moving lights. The combination served to highlight the collective performance of the band and the intrinsic emotion of the music, taking the audience experience to the next level.

It’s hard to imagine a musical experience that’s more enveloping and uplifting than what The War On Drugs brought to the stage at this performance. This experience of live music, shared with like-minded people, is what we’ve missed during the long COVID night. There’s a reason that this band is selling out venues; this is not only the experience we want to break our long musical fast, but the one we need right now.

The “I Don’t Live Here Anymore” tour continues over the coming months; tickets are available via Ticketmaster. The War on Drugs will play a second gig tonight (January 20th) at ACL Live. 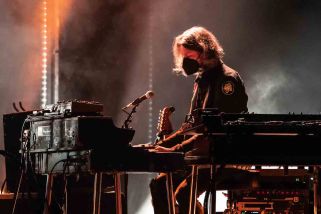