The Weeknd’s Dawn FM is the theme music for anyone addicted to toxic relationships, but wants to party ‘till bits of yellow peek from behind the clouds. That’s not a diss, because we all have our issues. But that fundamental truth drives Abel Tesfaye’s latest, along with a desire to just do better.

Well, maybe not entirely better. Dawn FM, released today (January 7th) after just a few days’ heads-up, is laced with echoes of the past, yearns for a better future, and a man stuck in his present predicament, trapped between a rock and a hard place known as “himself.” And as per usual with The Weeknd, it’s addictive in all of the best ways possible.

Narrated by Jim Carrey — yup, Ace Ventura — Dawn FM frames itself as a radio station for those trapped between worlds. Carrey is our DJ for an album The Weeknd says is music designed for the “purgatory” in which we find ourselves. You know, waiting for the day we enter the fabled “post-pandemic” reality.

Purgatory is the waiting room between our realm and heaven for those who didn’t go to a Catholic high school. While inhabitants wait to hear their number called to enter the pearly gates, they atone for the sins they committed throughout their lives. Judging by his past, and specifically by the songs on Dawn FM, The Weeknd believes he has a lot of atonement to do.

Songs like “Gasoline,” “Sacrifice,” and “I Heard You’re Married” are the contradictions and confessions of a cat coming to grips with scary truths and very few solutions.

He’s not ready to settle down or give up anything for a relationship, but his heart aches at the thought of being someone’s sidepiece. He knows bad relationships are a crutch and lead to, well, a lot worse vices. And yet, he can’t bring himself to move on even though he spent time working on himself and becoming a better human. He knows his past sins will catch up to him, so he treats life like a track meet, only slowing down for the occasional introspection.

Sometimes, that self-reflection comes in the form of lines like, “Remember I was your hero, yeah/I’d wear your heart like a symbol/ I couldn’t save you from my darkest truth of all/ I know, I’ll always be less than zero” on the aptly titled “Less Than Zero.” Or, by way of “A Tale by Quincy,” where Quincy Jones puts himself on a therapist’s couch to examine the reasons for his failed relationships with partners and his children.

Speaking of Mr. Jones, his presence is felt on Dawn FM in more ways than one. The Weeknd’s latest owes a lot to Thriller or Off the Wall, devoted to 1980s synth and funk. While it throws dashes of hip hop, EDM, and even blues into its particular brand of gumbo, the album’s sounds are firmly rooted in the decade of excess.

The Weeknd made his love for the era apparent on 2020’s After Hours, crediting it to his time playing Grand Theft Auto: Vice City. Dawn FM evokes Michael Mann’s Thief and its score by Tangerine Dream. Songs seamlessly slide from one to the next, creating a playful backdrop with a sinister edge hidden just below the facade of confection.

This isn’t The Weeknd at his darkest; Dawn FM isn’t in the same ballpark or even the same league in that regard. But, ironically, given the narrative idea behind the album, it is him at his most balanced.

The production allows Abel to puff his chest a bit on “Here We Go…Again,” featuring a short-ish verse from Tyler, the Creator. The song serves as a semi-victory lap for their accomplishments in 2021. It’s only a modest brag session, because the song is about the potential pitfalls of falling in love at the height of one’s fame.

Even after performing at the Super Bowl and making “a quarter bill on an off-year,” the Toronto native still can’t bring himself to look at a glass as anything but half-empty. What’s dope about Dawn FM is how it uses its pop sensibilities as a Trojan horse for some profoundly emotional subject matter. Seriously, did you ever think songs about depression from drug use, heartbreak, or insecurities could make you want to get up and dance?

For the most part, the few guests on the album show out. Tyler and Quincy, you know, but Lil’ Wayne’s verse disappoints, especially after the string of scenes he stole in 2021. That said, none shine brighter than Dawn FM’s DJ. Carrey blesses his neighbor with a performance that adds to the album’s playful yet eerie nature and echoes the easy listening DJs of the past. “Jim,” as he’s referred to on the track list, understands the assignment better than anyone else.

As our guide through purgatory, Carrey shows up at the end of “Out of Time” to remind us it’ll all be over shortly: “Soon, you’ll be healed, forgiven, and refreshed. Free from all trauma, pain, guilt, and shame. You may even forget your own name.”

Depending on your perspective, that’s either really comforting or incredibly scary, and Carrey plays those notes perfectly. He’s the last voice we hear on the album, reciting a poem about acceptance, living with regret, and focusing on what will come, not what was. “In other words, you gotta be heaven to see heaven.”

Great words to remember for anyone feeling stuck between the person they are and the person they want to be. For Abel Tesfaye, a guy finally ready to shine a light on at least a few of the dark corners of his soul, those are great words to which to try to aspire. Emphasis on “try” because, as Dawn FM shows, atonement isn’t always easy, but it sounds like a lot of fun. The first big album of 2022 delivers like an 80 lb. baby.

Essential Tracks: “Sacrifice,” “Take My Breath,” “How Do I Make You Love Me?” 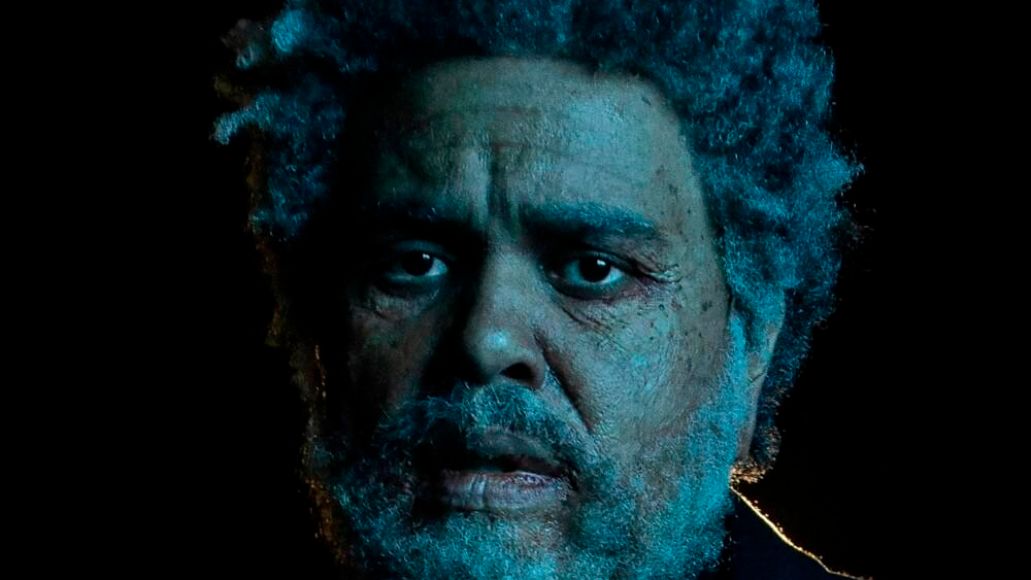