Pamela Adlon wishes her toilet worked. Not the toilet in her home, but the toilet seen occasionally on screen in the home of her Better Things character, LA-based actor Sam Fox. “Only when we had that super toilet in that one episode, did it flush,” she tells Consequence. “But I want everything to work. It has to be authentic all the time — everything.”

Authenticity is a key part of the FX comedy, which ends its five-season run later this spring. The series, created by and starring Adlon, chronicles the ups and downs of Sam’s world as she tries to provide the best life possible for her eccentric mother Phyllis (Celia Imrie), and her three daughters Max, Frankie, and Duke (Mikey Madison, Hannah Riley, and Olivia Edward), despite all the frustrations they might inspire.

While many creators find different paths to that goal of authenticity, in Better Things, there’s one magical word that best captures the show’s approach: Mess. Under Adlon’s attentive eye (since Season 2, she’s directed every episode of the series), the Fox home is warm and open, but also cluttered and untidy — while built on a soundstage, it feels like a living place.

“I think that’s part of what makes the show the show,” says Olivia Edward. “The reason it gets so much love is that this show shows things that other shows, usually we just skip over. Like, that’s the part that we don’t want to show them, because they have enough of that in their life. But sometimes you need that because it’s relatable.”

“The mess of the house and the mess of the rooms — I think navigating all of that creates a certain energy in the background of all of the scenes,” Madison agrees.

Adlon’s approach in this regard extends beyond the production design to every aspect of the series, from production to post-production. “Life is mess, it just is, and so that’s what you have to fight when you’re making my show in particular — you don’t want to have everything be neat and wrapped up in a funny bow,” she says. “That’s just the way it is and you want those mistakes. You want to be doing a dance sequence and someone falls and bobbles. You don’t want things to be perfect, because then a robot made it.”

The show’s fifth season continues its intimate, detail-oriented approach to capturing Sam’s world, while digging a little deeper into Sam’s family history and heritage (even managing some international travel under pandemic conditions) — all leaning on the tone and style Adlon has established over the past few years, one which savors the unexpected and surprising.

Edward remembers that in a scene she shares with Madison later in this season, there was a moment where a blunder became a part of the storytelling: “I had to drink something really fast, and then my voice came out really, really weird, and we just broke out into laughter because it was really, really funny. And they used it because it fit in naturally. I was like, wasn’t that the blooper? But it works.”

Adlon says that making sure those kinds of moments make it into the show “is a learning curve, because I have some new editors and some new assistants. We could have a cut of a scene that we’ve been looking at for a long time, where all of a sudden, Max is coming into the house and the dog is there and she starts to close the door on the dog and she goes, ‘Oh my god!‘ In the original edit, that’s not happening, because the editors are like, ‘Oh, that’s a mistake.’ Eventually, they learn — keep all the mistakes in. All the mistakes are the stuff of life.”

And “the stuff of life” is really what Better Things is about, at its core. One way this comes through is in one of the show’s most beloved locations. A regular feature of the series is its lovingly-shot cooking montages, featuring Sam concocting an elaborate dish or cocktail, and while Adlon’s on-set toilet doesn’t work, the soundstage kitchen is relatively functional.

As Adlon explains, “I need to see the steam and the smoke coming out of the food — that’s one of the most important things. It can’t just be cold, dead food. So we have the stovetop — we have a flame, it clicks. When we need to use the sink, they put water through the sink. The oven light goes on. The only thing that doesn’t work is the oven. The oven doesn’t cook on the stage.”

Sam is not a precise chef, but a home cook, making the sort of casual sloppy mistakes that everyone does when preparing a meal for themselves or their closest family members. But the food still looks incredible on screen, something Adlon insists on.

“I’ve had so many instances where I’ll look at my prop people and be like, ‘What the fuck is this?’ And they’re like, ‘Oh,'” she says. “The food has to be a thing that makes you want to eat it. One of my pet peeves as an actor was always looking at people in shows and television and movies and pushing peas around their plate and not eating the food. Who would want to eat that food? It’s just loveless-looking food.” 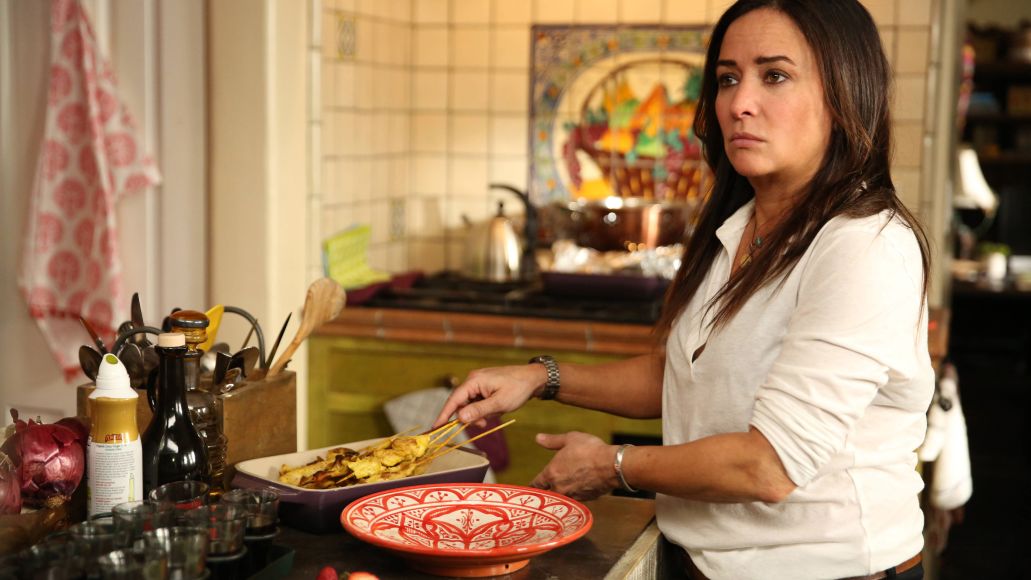 Why Better Things Is One of TV's Messiest Shows (On Purpose)