At Dua Lipa’s tour kickoff in Miami on Wednesday night (February 9th), the artist put on a heart-pumping show that her fans are sure to be nostalgic about in the days to come.

Lipa’s show, dubbed “Future Nostalgia,” is of course based around her best-selling pop album of the same name. After years of pandemic-related delays, the British singer was finally able to bring the LP to life, playing to a sold-out crowd at FTX Arena in downtown Miami. For around 90 minutes, Lipa and her dancers delivered an energetic, dancing experience that allowed her fans to travel to a different, happier world, even if just for a little while.

As the arena turned dark, signaling the start of the show, an intro video played, introducing all of Lipa’s backup dancers before the woman of the hour strutted out on stage in a lime green jumpsuit for “Physical,” before a seamless transition into her breakout single “New Rules.” Lipa and her purple-clad dancers showed off moves reminiscent of the chart-topping music video, and the crowd eagerly counted each relationship rule with her. 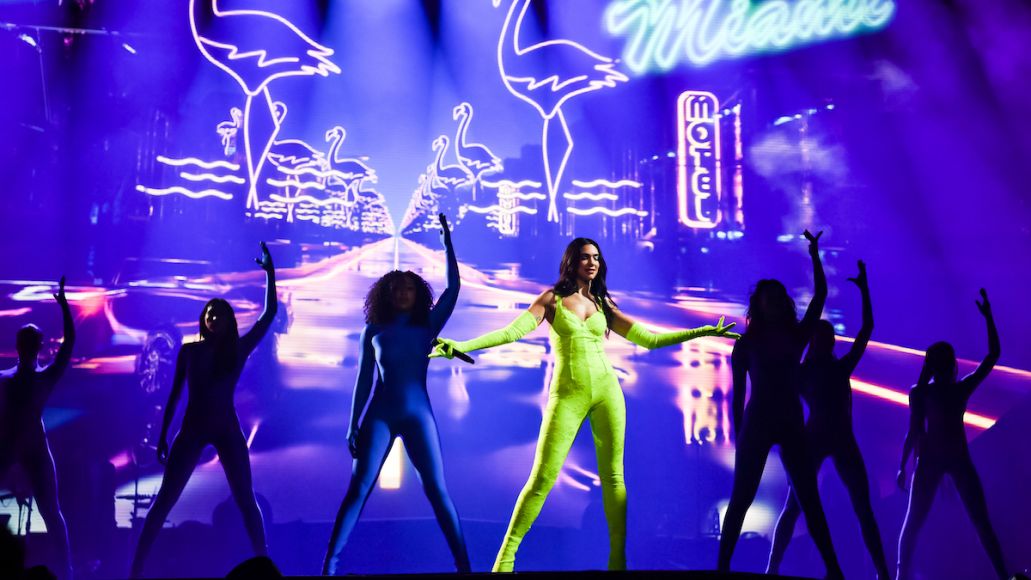 Lipa has paid careful attention to her visual production, too. The next few songs followed her around the stage with dancers echoing an ‘80s style workout on lit-up roller skates, umbrellas opening and closing, flashy diamond hearts, and a cube made of twinkling lights that hovered above the arena.