In the spirit of Post First, Ask Questions Later, Joe Rogan shared an image of a purported CNN article that showed actor Steven Seagal fighting with Russian Special Forces against Ukraine. After a couple of hours and more than a little mockery Rogan deleted the post, admitting that he’d fallen for a photoshop.

The easily avoidable flub began with Rogan posting an image of an article, rather than a link to an article, which is usually a red flag on social media. Besides that, the run-on sentence in the impersonation would have been thrown out of any reputable English 101 class: “Intelligence agencies around the world have spotted American actor Steven Seagal among Russian special forces positioned around the outskirts of Gostomel airfield near Kyiv captured by Russian airborne troops,” it read, in apparent ignorance of the existence of commas.

A quick search of CNN would have shown no such article, and a passing run-through of Seagal’s filmography would have revealed the 2017 film Cartels, from which the image was cribbed. But as Rogan has demonstrated time and time again, he’s not a big fan of research.

To his credit, he did own up to the mistake. “I deleted my earlier post about Steven Seagal being in Ukraine because it was parody, which isn’t surprising, but honestly it wouldn’t be surprising if it was true either,” he wrote in his sorry-not-sorry Instagram follow-up. “He was banned from Ukraine in 2017 because he was labeled as a national security threat. I, like all of you, hope the tragic situation is resolved there quickly.”

According to Rolling Stone, the misinformation post racked up over 400,000 likes and 11,000 comments during its brief life. In contrast, Rogan’s follow-up is sitting at about 170,000 likes and 3,000 comments at the time of this writing, and seems unlikely to match the engagement of the more sensational post. Check out both of his posts below.

Rogan remains one of the most popular podcasters in the world, despite persistent vaccine misinformation and a viral video showing his repeated use of the N-word. But Spotify, which reportedly paid $200 million for the exclusive rights to broadcast The Joe Rogan Experience, is sticking by him. 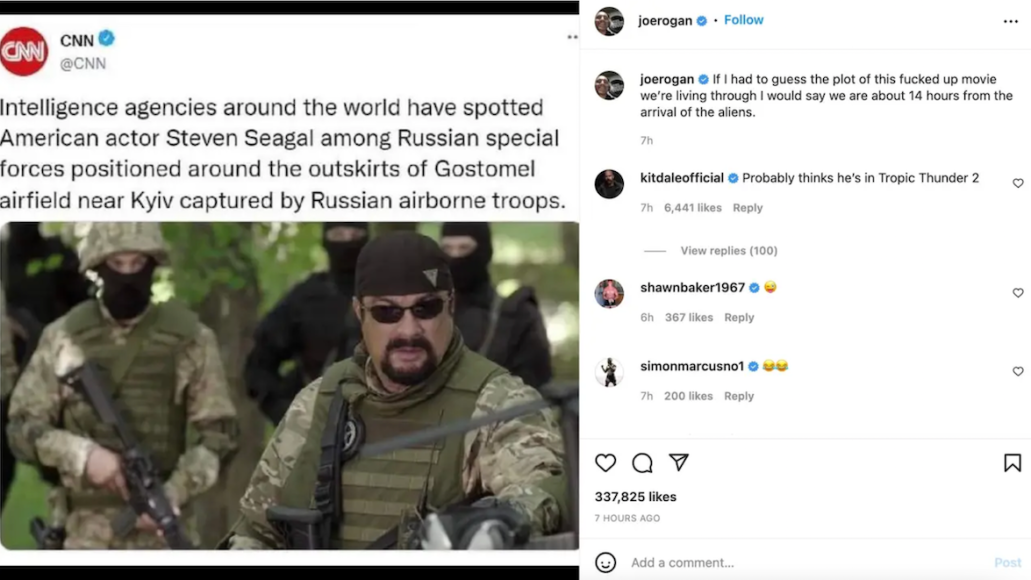 Steven Seagal Is Not Fighting in Ukraine, Despite What Joe Rogan Says