Whenever Pete Davidson is done with SNL, he should consider going into real estate because he’s living rent free in the head of a multi-billionaire. Throughout much of the weekend, Kanye West shared upwards of 50 Instagram posts about his ex-wife Kim Kardashian’s new boyfriend.

Among other things, West mocked Davidson’s tattoos, accused him of sleeping with Hillary Clinton, alleged the unfounded rumor that Davidson sent intimate photos of himself and Ariana Grande to Grande’s ex Mac Miller, took a swipe at Davidson’s close friend Machine Gun Kelly, and offered his SNL castmate Michael Che double his salary to leave the show. West also shared a series of fan-made memes, including one spoofing Captain America: Civil War, with West, Drake, and Julia Fox on one side, and Davidson, Kardashian, Kid Cudi, Taylor Swift, and Billie Eilish on the other. As one Twitter user hilariously noted, West’s Instagram started to look “like a Pete Davidson stan account.”

Unfortunately, West’s Instagram has now taken a potentially dangerous turn. In a post made on Monday morning, he called on his fans to seek out Davidson “and scream at [the] loser [sic] at the top of your lungs and say KimYe forever.” As West stans are often loyal to a fault, Davidson now faces the very real and likely possibility of being verbally harassed while out in public.

For his part, Davidson has not said a word about West. However, West did share a text message allegedly from Davidson, in which he promised not to get in the way of his family and ended by saying he hopes “we can all be friends.” Apparently that’s supposed to make Davidson look bad?

There’s a point where West’s conduct goes from being that of an eccentric creative to downright disgusting, and a recent piece by Roisin O’Connor for The Independent is right to ask whether such juvenile behavior is sabotaging his artistic legacy.

You can find screen grabs of some of West’s Instagram posts below. He tends to delete them shortly after posting. 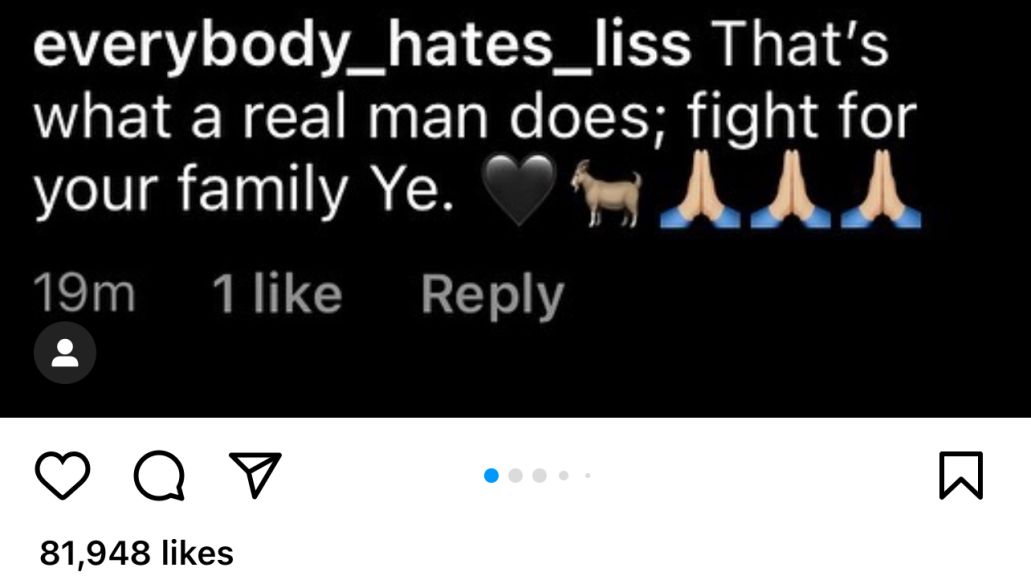 Kanye West called Pete Davidson ‘Skete’ and posted a meme based off of Civil War‼️ pic.twitter.com/aWz84b14sg

“I JUST WANTED MY FRIEND TO HAVE MY BACK THE KNIFE JUST GOES IN DEEPER” pic.twitter.com/ksjiPKFkBB