Kim Kardashian has lashed out at her ex-husband, Kanye West, over his “constant attacks on me in interviews and on social media.”

Kardashian posted a one-page statement to her Instagram Stories on Friday — hours after West used his own Instagram page to chide his ex-wife for allowing the couple’s eldest child, North, to use TikTok.

“As the parent who is the main provider and caregiver of our children, I am doing my best to protect our daughter while also allowing her to express her creativity in the medium that she wishes with adult supervision — because it brings her happiness,” Kardashian wrote.

“Divorce is difficult enough on our children and Kanye’s obsession with trying to control and manipulate our situation so negatively and publicly is only causing further pain for all. From the beginning I have wanted nothing but a healthy and supportive co-parenting relationship because it is what is best for our children and it saddens me that Kanye continues to make it impossible every step of the way.”

Kardashian ended her statement by expressing she wishes “to handle all matters regarding our children privately and hopefully he can finally respond to the third attorney he has had in the last year to resolve any issues amicably.”

Update: West has responded to Kardashian in a new Instagram post: “What do you mean by main provider ? America saw you try to kid nap my daughter on her birthday by not providing the address You put security on me inside of the house to play with my son then accused me of stealing I had to take a drug test after Chicago’s party cause you accused me of being on drugs Tracy Romulus [Chief Marketing Manager of KKW Brands] stop manipulating Kim to be this way…”

West and Kardashian, who share four children together, separated in February 2021 following a six-year marriage. West has made a number of public comments about Kardashian over the last few months, from expressing his desire for the couple to get back together, to blaming her family for encouraging her to get a divorce, to criticizing her for making jokes about their separation on Saturday Night Live.

Last month, West publicly accused Kardashian of not inviting him to their daughter Chicago’s birthday party (he said he found out about the location of the party from Travis Scott, who is dating Kardashian’s sister, Kylie Jenner). He’s also insinuated that Kardashian has barred him from coming inside of her house.

West also recently took a swipe at Kardasian’s current boyfriend, Pete Davidson, by threatening to “beat [his] ass” on the song “Eazy.” 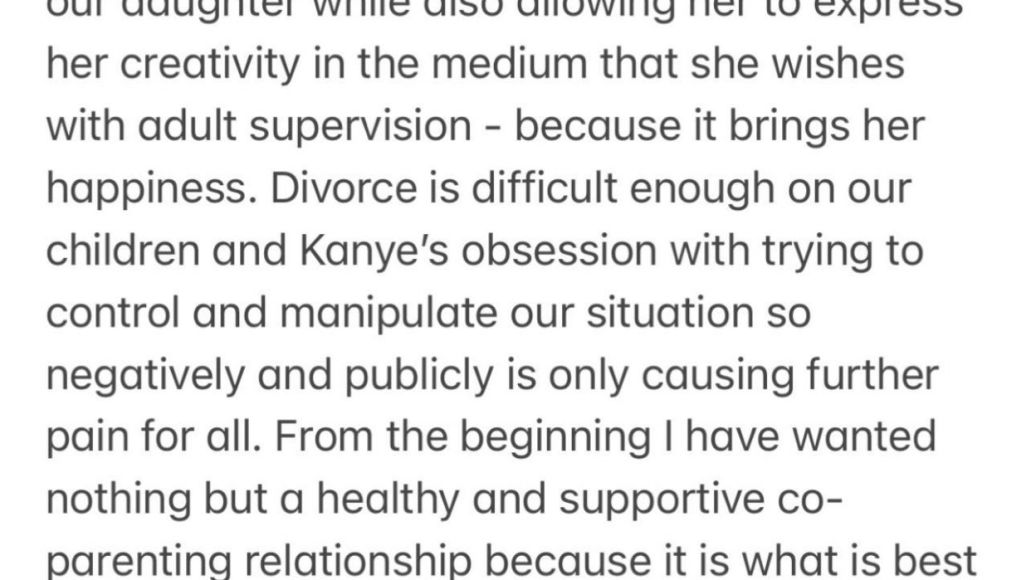 Kim Kardashian: Kanye's "Constant Attacks on Me" Are "Causing Further Pain" For Our Family