Nine Inch Nails have announced a 2022 US tour, including a hometown show in Cleveland, Ohio, with fellow industrial acts Ministry and Nitzer Ebb. It marks NIN’s first extensive outing in four years.

The tour is comprised of a few dates in the spring, followed by a run of shows in September. Tickets go on sale on Friday (February 11th) at 10 a.m. local time and can be purchased via Ticketmaster, with pre-sales beginning as early as Tuesday.

The Cleveland show concludes the tour on September 24th at the Blossom Music Center. It promises a dream bill for industrial fans: Ministry and Nitzer Ebb helped pioneer the genre in the 1980s, paving the way for Nine Inch Nails.

Ministry dropped their new album Moral Hygiene in October and will head out for an extensive spring US tour with the Melvins and Corrosion of Conformity (get tickets here). UK-based Nitzer Ebb are celebrating their 40th anniversary as a band this year. Although they haven’t released a new album since 2010, the group — which pioneered the EBM style of industrial dance music — has remained active as a live act.

Meanwhile, Nine Inch Nails have been working on new music. Frontman Trent Reznor told the press at the 2021 Academy Awards (where he and NIN bandmate Atticus Ross won for Best Original Score for their work on the movie Soul) that the band was set to hit the studio immediately. That was nearly a year ago, so a 2022 album is not out of the question. In fact, we’ve listed NIN’s next LP as one of our 35 Most Anticipated Metal & Hard Rock Albums of 2022.

In addition to the headlining dates, NIN are also booked for a few 2022 festivals, including Shaky Knees and Primavera Sound. See the full list of Nine Inch Nails’ tour dates below. Get tickets here. 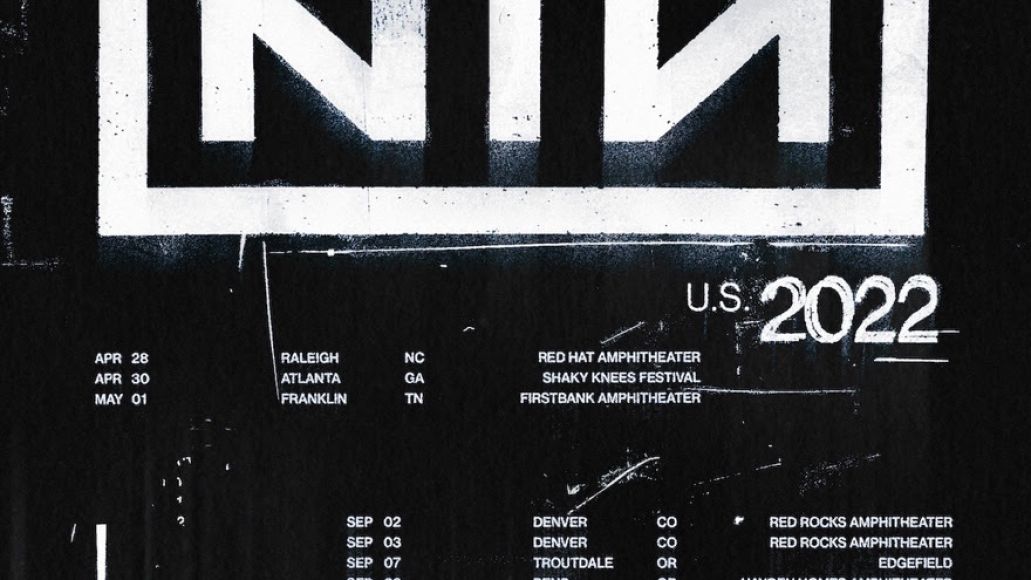 Nine Inch Nails Announce 2022 US Tour, Including Show with Ministry and Nitzer Ebb