Sean Penn is in Ukraine filming a documentary about the Russian invasion, according to a press release from the Office of the President of Ukraine (via Newsweek).

The American filmmaker first landed in Ukraine in November 2021 to make a movie about Russian aggression. After briefly returning to the US, he was back in Ukraine’s capital city of Kyviv on Thursday to attend a press conference. For the project, he has reportedly interviewed local journalists, military leaders, and Deputy Prime Minister Iryna Vereshchuk.

According to a statement from the Office of the President, “The director specially came to Kyiv to record all the events that are currently happening in Ukraine and to tell the world the truth about Russia’s invasion of our country. Sean Penn is among those who support Ukraine in Ukraine today. Our country is grateful to him for such a show of courage and honesty.” It continued, “Sean Penn is demonstrating bravery that many others have been lacking, in particular some Western politicians.”

President Volodymyr Zelensky added, “The more such people in our country now, true friends of Ukraine, who support the struggle for freedom, the sooner it will be possible to stop Russia’s treacherous attack.”

At the time of this writing, several Ukrainian cities are under attack, and Russian special forces and airborne troops have breached Kyiv. Ukraine’s airspace is closed to civilian flights, and it’s unclear if Penn would be able to leave the country if he wanted to. 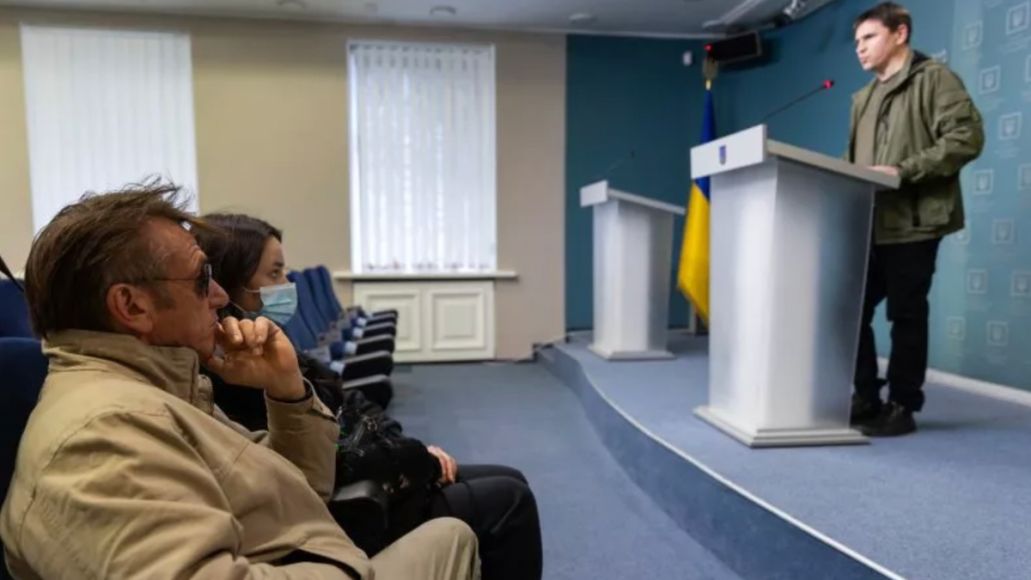 Sean Penn at an Ukrainian government press briefing, photo by the Office of the President of Ukraine