Snoop Dogg could face a lawsuit for publicly putting an Uber Eats driver on blast.

As CBS Los Angeles points out, the Super Bowl Halftime Show performer took to his Instagram story last month to complain about a delivery driver who failed to deliver his order. Snoop’s video included his message exchange with the driver, whose name is Sayd, and who said the rapper’s neighborhood was “not a safe place.” Now, Sayd says he might sue Snoop for posting his personal information in the video, including his first name, photo, and license plate number.

“There’s my picture there and also there is my first name,” Sayd said of Snoop Dogg’s Instagram post. “After I saw the video, I’m kind of like, I have high anxiety and I fear for my family’s safety. I contacted the customer many times and I followed the protocol by the book.”

“Motherfucker from fucking Uber Eats didn’t bring my fucking food talking about he arrived,” Snoop yelled in the Instagram video. “‘This is not a safe place’ — punk motherfucker. Where my food at? You got all my goddamn money, punk.”

Sayd added he didn’t know the delivery order was for Snoop when he was sent to an industrial area in Inglewood, California. The driver added that he followed Uber’s protocol, which is to wait eight minutes after arriving before canceling the order.

Uber Eats issued a public apology to Snoop, though Sayd said he felt unprotected by his employer and that he deserved the apology instead: “I have to fight for my rights and my family’s rights,” he said. “I just feel like I’m not really well from this delivery and also Uber Eats.”

With all his various ventures, Snoop doesn’t have much time to cook these days. He recently acquired Death Row Records and is set to host an American version of Eurovision. 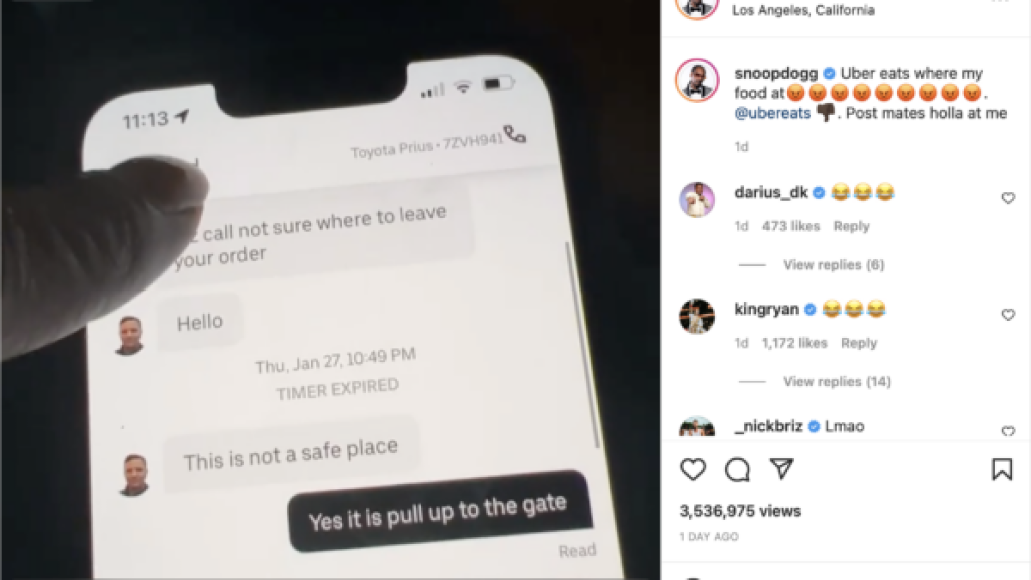