The Pitch: The original pitch was simple: In 2019, the 45th President of the United States announced a plan for a Space Force branch of the U.S. military. To Steve Carell and Greg Daniels (who previously worked together on The Office), that sounded pretty ridiculous, so they successfully pitched Netflix on a satirical version of what such a “space force” would look like, with Carell as the general in charge.

Unfortunately, Season 1 of Netflix’s Space Force… didn’t quite work. Despite the assembly of a surprise-packed ensemble, including awkward comedy G.O.A.T. Carell, human live wire Ben Schwartz, secret MVP Tawny Newsome, and wild card John Malkovich, there was something just off in how the writing and acting and directing jelled together — and to the credit of Carell and Daniels, they noticed.

Thus, being lucky enough to return for a second season, premiering Friday, February 18th, they made some changes, including a shift from the first season’s more cinematic style to something more conventional, and a greater emphasis on the comedy. Did that make things better? The answer is a pretty confident yes, though that doesn’t mean there aren’t some issues with these seven episodes.

When Last We Left Our Heroes… A ragtag Space Force mission to the moon had just gone bad, as the Americans attempted to sabotage the Chinese forces on the surface, only to find that their own base had been crippled. A dire situation indeed, leaving astronaut Angela (Newsome) and her team in space, in dire peril. That’s where things left off at the end of Season 1, but the first indication that Season 2’s going to take a different path is that the writers very efficiently wrap that cliffhanger up. 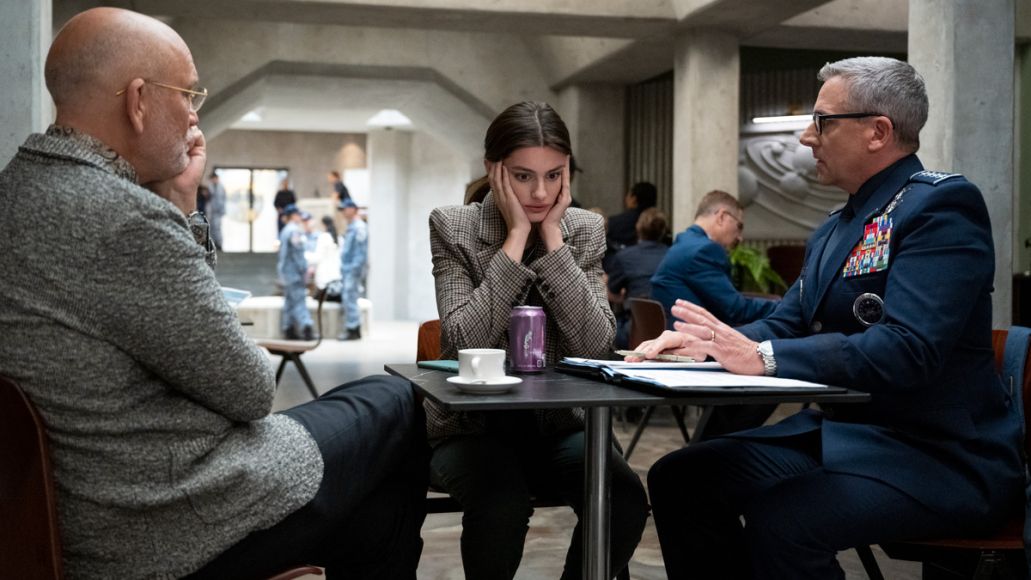 While the events of the moon calamity do reverberate throughout the season, especially Angela’s reaction to the experience, pretty much all of the central action this season is, in fact, Earth-based, with the focus turning towards how Space Force is going to operate under a new political administration, with a new minuscule budget.

Leaning hard into the workplace comedy model works to the show’s advantage, with Office director Ken Kwapis delivering clear sharp bits and set-pieces — but not without some emotional undercurrents. The result is a sense that, as ridiculous as events sometimes get, things are… perhaps not more grounded (pardon the pun) but a great deal more emotionally authentic than Season 1.