Netflix has revealed that Stranger Things’ long-awaited fourth season will arrive in two parts this summer, while also confirming that its fifth season will be the show’s last.

“Seven years ago, we planned out the complete story arc for Stranger Things,” show creators Matt and Ross Duffer said in a letter released to fans on Thursday. “At the time, we predicted the story would last four to five seasons. It proved too large to tell in four, but – as you’ll see for yourselves – we are now hurtling toward our finale. Season 4 will be the penultimate season; Season 5 will be the last.”

The first half of Stranger Things 4 will premiere on May 27th, with the second batch of episodes following in July 1st.

Stranger Things 3 premiered way back in July 2019. Due to the pandemic, production on Season 4 wasn’t completed until August 2021. Beyond the chaotic filming schedule, the cast and crew worked through nine scripts spanning over 800 pages, as well as thousands of visual effect shots. All told, “Stranger Things 4 was the most challenging season yet, but also the most rewarding one,” the Duffers proclaimed.

Despite the lengthy gap between seasons, Stranger Things 4 will pick up just six months after the Battle of Starcourt. According to the official logline, the gang is “separated for the first time – and navigating the complexities of high school hasn’t made things any easier. In this most vulnerable time, a new and horrifying supernatural threat surfaces, presenting a gruesome mystery that, if solved, might finally put an end to the horrors of the Upside Down.” In anticipation, Netflix has shared a pair of teaser trailers.

To close their letter, the Duffer Brothers teased the possibility of future spinoffs. “There are still many more exciting stories to tell within the world of Stranger Things; new mysteries, new adventures, new unexpected heroes. But first, we hope that you stay with us as we finish this tale of a powerful girl named Eleven and her brave friends, of a broken police chief and a ferocious mom, of a small town called Hawkins and an alternate dimension known only as the Upside Down. As always, we are grateful for your patience and support.” 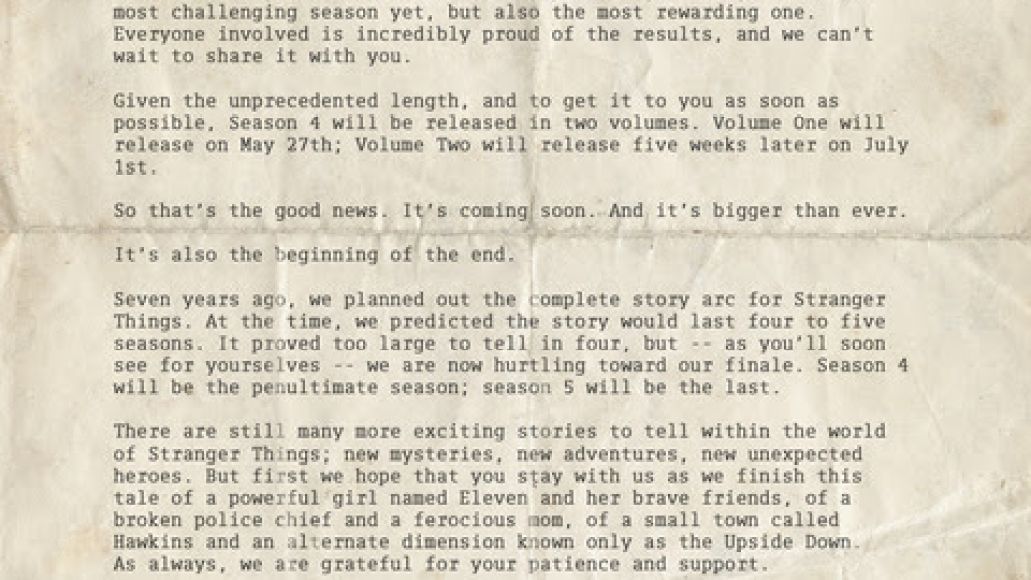 Kevin Smith Suggests WBD Should Have Nixed Flash Instead of Batgirl: "Supervillain" in Real Life