It’s Foo Fighters Week here at Consequence. Keep checking back throughout the week for interviews, lists, editorials and videos — it’s all things Foos, all the time. You can see everything in one convenient place here.

The Pitch: Decades ago, it wasn’t uncommon for a band or musical artist of some repute, from the Beatles to Prince to the Who, to star in a movie where they wouldn’t just be playing music, but would be playing themselves to some degree. Designed to appeal to fans of the band or artist, these projects would never push too hard into the realm of serious drama, instead leaning into comedy or other genres while also delivering a banger soundtrack.

Filmed in relative secrecy largely before the pandemic (production shut down in March 2020 along with the rest of the world, with the film eventually finished during quarantine), Studio 666 is a deliberate throwback to that proud tradition, starring Dave Grohl and his loyal Foo Fighters as themselves, but in a darker context. But that’s what you get for recording a rock album in a haunted house…

What Could Possibly Go Wrong?: Studio 666 starts as Dave (Grohl) is struggling with a bit of writers’ block when it comes to the new Foos album, a block that might be caused in part by the pressures that come with it being the 10th album. (For our purposes here, please disregard the existence of Medicine at Midnight.) But label exec Jeremy Shill (Jeff Garlin) has an idea, though, recommending that they check out an empty mansion in Encino, California as a potential recording space.

While creepy and rundown, Dave finds a glimmer of inspiration in the house’s acoustics, and asks the rest of the band to camp out with him in the house for a few weeks, just so they can bust out some killer tracks. Unfortunately, while Dave and the band seem to get their mojo back musically, the “killer” part above quickly becomes literal, as mysterious deaths begin occurring in and around the house, and Dave’s starting to act pretty weird — almost as if the house is possessed by a malevolent spirit that has gotten its hooks into Dave’s genius. 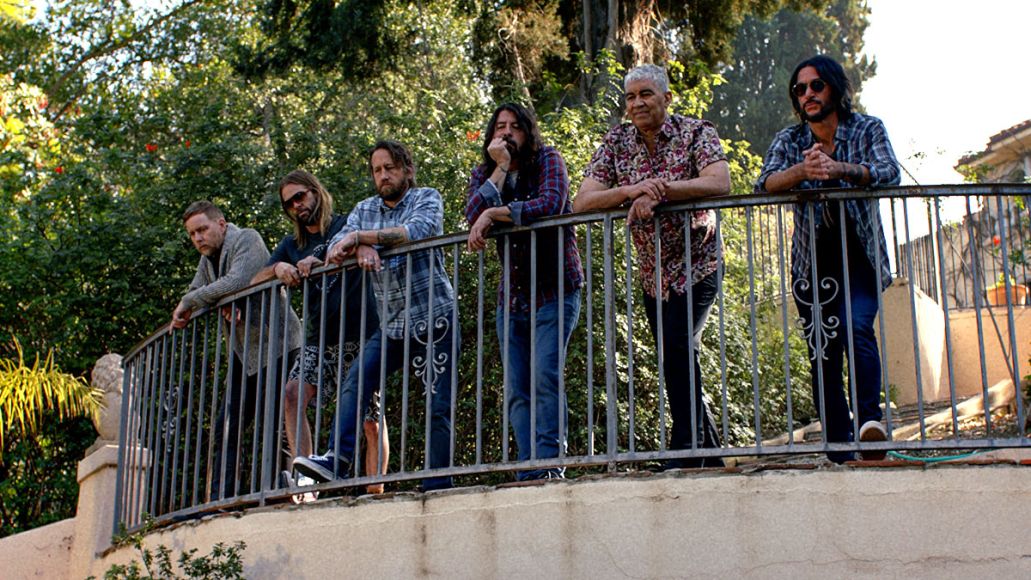 The story doesn’t require much more explanation beyond that, as the other Foos fight to survive the house — and their own bandmate. The script by Jeff Buhler and Rebecca Hughes (from a story by Grohl) layers in just enough mythology to establish what might be behind the evil unleashed, but otherwise keeps the focus where it should be — on the Foos being Foos, even as things get both spooky and bloody.

And that’s why you’re tuning in, of course — for the carnage and mayhem. Horror films come in many different flavors, of course, and here director BJ McDonnell (a seasoned camera operator and music video director who also directed the 2013 horror sequel Hatchet III) avoids too much in the way of psychological terror and jump scares, instead delivering a pretty steady stream of graphic kills that lean more towards comedy than terror.

Studio 666 Review: Dave Grohl and the Guys Get Gory in This Fun Old-School Horror Flick