The Pitch: For non-gamers, Uncharted is a remarkably straightforward project: Hot treasure hunters go on an action-packed adventure to track down a centuries-old treasure? Sure, checks out. Maybe these particular treasure hunters aren’t as nobly intentioned as, say, one Dr. Henry Walton Jones Jr., but that doesn’t mean 25-year-old bartender/history buff/aspiring thief Nathan Drake (Tom Holland) isn’t just as dedicated to tracking down some long lost gold.

We first meet Nathan as a 10-year-old living with his older brother Sam in an orphanage, though Sam makes his escape from the place after a run-in with the law, leaving his brother with a family artifact (an engraved ring), followed by, in the ensuing years, a trail of vague postcards from exotic locals. Now (ostensibly) an adult, Nate’s mixing drinks for trust fund girls at fancy bars and swiping their jewelry while they’re not looking — which is where Victor “Sully” Sullivan (Mark Wahlberg) finds him, and offers him a job assisting with a heist/treasure hunt.

Having known Sam, Sully feels sure that Nathan’s the right choice to help him track down the gold theoretically recovered by the men sailing with Magellan on his legendary attempt to circumnavigate the globe. And while lacking in experience when it comes to treasure-hunting, Nate does offer a deep knowledge of history and some remarkable upper body strength (the film literally includes a montage of Nate studying building schematics and doing push-ups and pull-ups, lest you question his later feats of climbing and hanging off buildings and whatnot). 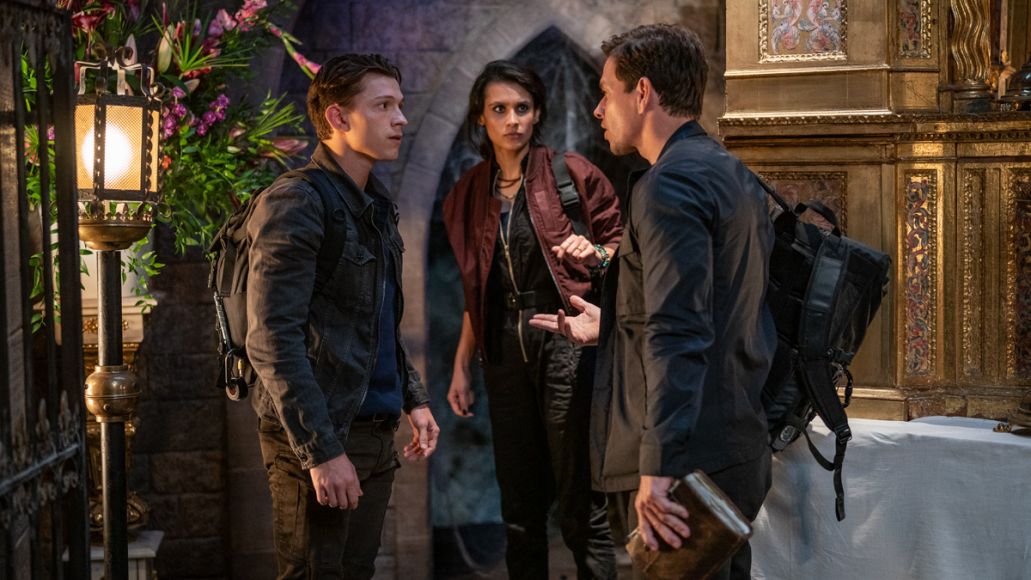 Of course, Sully and Nate aren’t the only ones after this treasure — not only does Sully enlist the help of another treasure hunter named Chloe (Sophia Ali) in the fight, there’s also the wealthy and evil Santiago Moncada (Antonio Banderas, hopefully paid very well for his appearance here), who’s hired the ruthless Jo (Tati Gabrielle, wearing a truly breathtaking series of outfits) to track down the treasure as well.