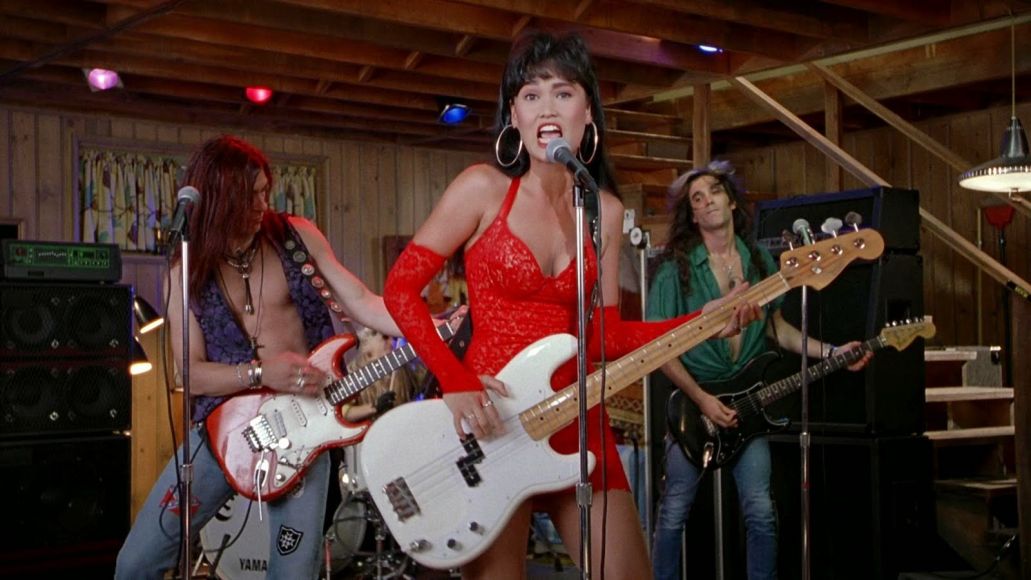 The early 1990s were a time when pop culture heroes like Bart Simpson were in the zeitgeist for rude talk and irreverent behavior; to the lexicon of the time, Wayne’s World added phrases like “monkeys might fly out of my butt” to other cultural catchphrases like “Don’t have a cow, man.” In short, it’s the perfect adult comedy for the pre-teen set, just adult enough to feel exciting and daring without actually providing much in the way of adult content to offend parents.

For a movie where a good 25 percent of the action takes place at various concerts, bars, and music venues, the only prominent example of drug or alcohol abuse is poor Phil (Sean Gregory Sullivan), a ready-to-spew friend of Wayne and Garth’s who makes being perpetually loaded look very, very uncool. Meanwhile, Wayne and Garth might hold a beer at one point or drink an extravagant tiki beverage while meeting with Benjamin at a bar, but the substance they’re most prone to abusing is red licorice. (Perhaps a metaphor for marijuana? But not a metaphor the film pushes.)

This innocence also extends to sex: While there’s a fair amount of talk about “schwing”-ing, it’s always on a barely adolescent level, like these two grown men have only recently discovered what’s in their pants. Garth’s fascination with beautiful women never goes beyond adoration from afar, while Wayne’s courtship of Cassandra is respectful and sweet enough to win her over, despite the superficial reasons why they might not be a perfect match.

And whether or not this was something that came from Penelope Spheeris’s direction, it’s worth noting that Cassandra is only occasionally objectified by the movie, and when it happens it’s very much in the context of an uncool choice made by the loathsome Benjamin. Otherwise, Carrere is treated as a full-fledged member of the ensemble, making her own witty jokes and demonstrating a pretty significant amount of agency, in comparison to the treatment love interests in male-driven comedies often get.

It’s fascinating to see all the ways in which the harder edges of hard rock culture are packaged for an era that was on the verge of criminalizing performers like Alice Cooper for devil worship; Wayne’s World puts an extended performance of Cooper’s “Feed My Frankenstein” on the big screen for young and old to enjoy, and then buttons it with Wayne and Garth hanging backstage with the eloquent and knowledgable lead singer, an iconic scene that still follows Cooper around to this day.

Since the days of Wayne’s World, there have been numerous attempts to recapture that same magic at the box office, but even the 1993 sequel only grossed $48 million (with a budget twice the size of the original). There’s no one reason why this happened, but a key cause might be that subsequent SNL adaptations leaned too hard into the quirks of their premises, rather than finding the universal themes inherent within them.

It’s not that Wayne’s World caters to the mainstream — it’s just that it’s a far more subtle and human film than Wayne’s World 2. Compare, in the first film, Wayne’s sweet decision to woo Cassandra by learning Cantonese (accompanied by some clever subtitle jokes), with the sequel’s extended tribute to kung fu movies as Wayne fights Cassandra’s father (the legendary James Hong). The former is a character-based romantic subplot with jokes, the latter is a joke-driven parody that doesn’t elevate or grow the characters at all.

Lest you feel that a positive critical appraisal of this movie is hindsight working in its favor, here’s a quick reminder that upon its original release Roger Ebert and Gene Siskel gave it two thumbs up, back in the days when that meant something. Siskel even ranked it number eight on his Top 10 list of 1992. They knew then what we know now: This film is the best sort of surprise, because its heart is right there on the screen.

The kids who grew up watching Wayne’s World now have kids of their own, and who knows at what age they’ll find it appropriate to expose the next generation to Wayne and Garth. But, hopefully, they don’t wait too long. 2022 is very different from 1992 in a lot of ways, but perhaps a major one is that we need this sort of silly, crass, yet forever pure love in the world, perhaps even more now than then.

Wayne’s World is streaming now on Paramount+. For more, look at our breakdown of the original film versus the sequel, as well as the 10 best quotes from the film.