Ben Bridwell is just waking up from a nap between interviews. Five years after his band’s last album — a span that felt even longer due to the pandemic — the Band of Horses frontman is back on the press circuit, and it’s tiring.

If fielding repetitious questions from journalists weren’t wearying enough, the topics up for discussion have been weighing on Bridwell for years. Written pre-COVID, the stories on Band of Horses’ new record, Things Are Great, are about depression, darkness, and divorce. Singing those songs live is something he looks forward to as meditative (“It’ll probably be more joyful than reflective on what the story is,” he tells Consequence. “It’s more like paying attention to the goddamn chords and shit”), but speaking about them is something else entirely.

“I had a Zoom with Germany or something like that this morning where I was in tears,” Bridwell admits. “It’s really difficult to talk about hard stuff, but God, I’m trying to learn how to do it correctly.”

There’s really no “correct” way to talk about personal difficulties, but both in our conversation and on Things Are Great, the South Carolina native is at least unreservedly open. The LP — which follows 2016’s Why Are You OK — makes no qualms about its melancholy with opening track “Warning Signs.” Reverberating guitars and vocals echo from the very core of Southern alternative music, a classic Band of Horses vibe that’s warm and familiar. Yet anxious builds breaking into whirlwinds of chaos reflect a spiraling Bridwell as he sings, “I don’t want help/ I don’t want counseling/ I won’t go to therapy/ I won’t do anything.”

A few tracks later, “In Need of Repair” lays it out in plain English over a dusky shuffle: “What’s the matter? You/ Can’t do all the things that we used to do/ And it sucks/ And it’s bad.”

“I think this record has so much straight-to-the-point narrative where I deliberately had to tell myself, ‘Tell the damn fuckin’ story. Don’t be afraid to be brutally honest,'” says Bridwell.

That bluntness served as a mechanism not only to deal with his personal troubles, but to return Band of Horses to a form we haven’t heard since Infinite Arms. That’s true even though Things Are Great was recorded with two new band members, guitarist Ian MacDougall and bassist Matt Gentling, whom Bridwell says brought “a punk spirit” to the sessions. Both joined after Tyler Ramsey and Bill Reynolds were fired (“Not quit, little fuckers,” notes Bridwell. “Act like they fuckin’ quit; they didn’t quit”) in 2017. MacDougall was BoH’s merch guy and Gentling joins from Archers of Loaf, a band Bridwell says was the South’s “Pavement, they were our Dinosaur Jr.”

“What they brought to the table is so brilliant,” exalts Bridwell. “I gotta say, Matt’s bass playing is something really special that Band of Horses hasn’t had in a grip.” He adds, “That’s no shade on Bill, because Bill’s bass playing is amazing.”

Band of Horses has experienced frequent lineup changes (one of the newest members has already departed), and Bridwell even went so far as to replace producers midway through this latest effort. Grandaddy’s Jason Lytle (who produced Why Are You OK) and Dave Fridmann essentially had a finished version of the album that ultimately left Bridwell unsatisfied. He chose to start over with Ryan “Wolfie” Zimmerman, a longtime BoH fan who happens to be a rising producer in the North Carolina scene.

Sessions with Wolfie were full of “us taking LSD and staying up all night and being free,” Bridwell recalls. “He has a lot to prove, Wolfie does, because he’s a young buck. And he really wanted to make a good Band of Horses record, which is why he was like, ‘You gotta play more guitar, Ben. You can’t just have these damn guitar players playing your demo parts.’ Wolfie really helped me understand what the essence, I think, is of Band of Horses — and that is a bit of slop.”

There is, in fact, a distinct lack of polish throughout Things Are Great. Whether it’s the purposefully loose mix of “Lights” or the beautifully imperfect riffs on “Aftermath” and “Ice Night We’re Having,” its evident that MacDougall, Gentling, and Wolfie’s fresh bloods reinvigorated the Band of Horses sound. As the content covers rockier ground, so too does the music.

Although the changes were for “the greater good” of the band and Bridwell insists there’s no ill will towards past collaborators, each separation pains him. “It still hurts me,” he says of moving on from Lytle and Fridmann. “Just like when you have to let band members go. This has nothing to do with being friends. This is the business, and it fucking sucks.”

It’s clear a lot “fucking sucked” making Things Are Great, from going through a divorce to scrapping an entire record. It makes the LP’s title something of “a piss take,” but even as he jokes about it, Bridwell is trying to make those words real. “I find that even though, yes, I’m being sarcastic in that title, things have gotten better and I find myself ever more optimistic in thinking things are actually great,” he says. 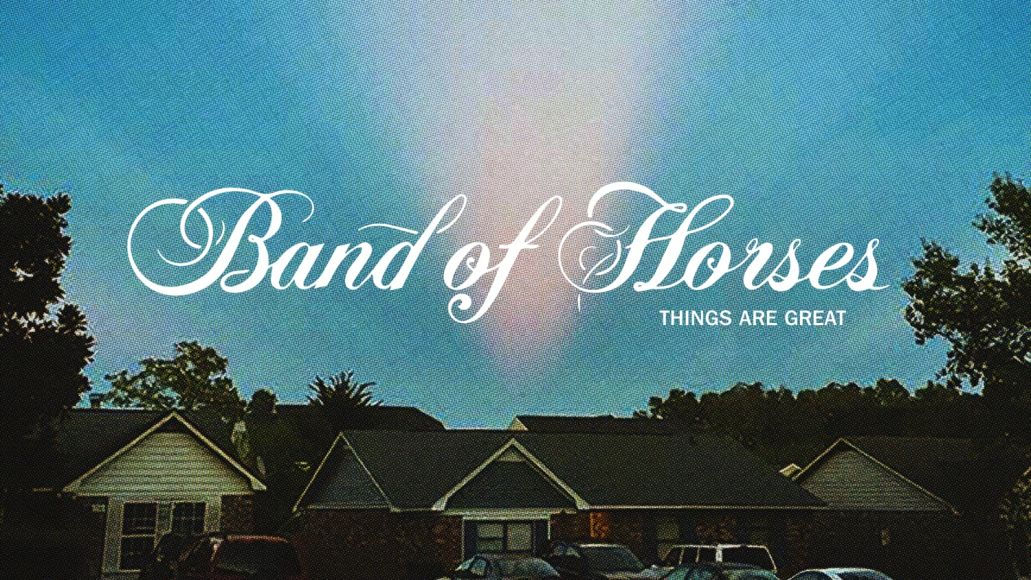 Still, the weight of the material has been burdening him for some time now. “Oh God, it’s been awful,” he says of the long wait for the album’s release. “Just having this record, it’s a monkey on your back kind of thing. Please get this thing out of me; get it off of my conscience. I need other people to take these stories for themselves so I can stop living them in a way. I need people to enjoy these stories or to grovel in their own misery. I’m tired of living in that world, honestly.”

Which is probably why this interview felt so… different. Bridwell wasn’t the “consummate professional” dutifully replying to questions, nor the aloof rockstar tossing off responses. With him barely looking at the camera and instead often playing with his pup, Lucille, Bridwell was looking for answers as much as he was trying to give them. He was disarmingly honest, searching to verbalize the knot of emotions and thoughts in his head in ways that felt true.

Things Are Great is much the same, a two-year-old record of hardship and personal inquisition that is finally arriving precisely when it’s supposed to.

Things Are Great is out March 4th. Band of Horses will support the album on tour with The Black Keys this summer, and you can get tickets via Ticketmaster.