The Pitch: The timing of DMZ is maybe not the greatest, depending on whether or not you’re up for engaging with a story about urban warfare at a time when that sort of literal real-life horror is headline news. But the new HBO Max original series, based on the DC comics series and executive produced by Ava DuVernay, still stands out for its compelling premise and dynamic cast, despite a few issues largely stemming from its format.

New World Order: When we first meet Alma Ortega (Rosario Dawson) in the not-too-distant future, she’s working as a medic in an intake facility for those who have tried illegally to enter the United States of America — not to be confused with the Free States of America, because seven years ago, a new American civil war split the country as we know it apart, with the area known as New York City now declared a DMZ (demilitarized zone) between the two newly defined countries.

We don’t get much of a taste of Alma’s life in what technically remains the United States, because she almost immediately leaves it on a mission: to find her son Christian (played in flashbacks by Bryan Gael Guzman), from whom she was separated during Evacuation Day, the day when most New Yorkers fled the isle of Manhattan before it was walled off from the outside world.

Alma can’t find Christian in either the USA or the FSA, making the DMZ his most likely location, and so with help from a co-worker she sneaks into the forbidden zone, trying to stay alive in a relatively lawless society of those who stayed behind while hoping to track him down. There’s no political angle to this story; no understanding of the national fractures that led to this point. It’s all just about survival.

If You Can Make It Here… Within the anarchy of life in the DMZ, there’s a sort of order to be found in the groups which rule over various territories, with the most prominent leader amongst them being Parco (Benjamin Bratt), who heads up the Harlem Kings and has the ruthless assassin/graffiti artist Skel (Freddy Miyares) to turn to in matters of ultra-violence.

Parco’s biggest rival inside the DMZ is Wilson (Hoon Lee), who actively borrows from Hong Kong gangster movie cliches to establish his power in Chinatown, and both men are running in an actual election to determine the governor of the DMZ, which offers up a whole new complication to the balance of power which currently exists in this state of being. 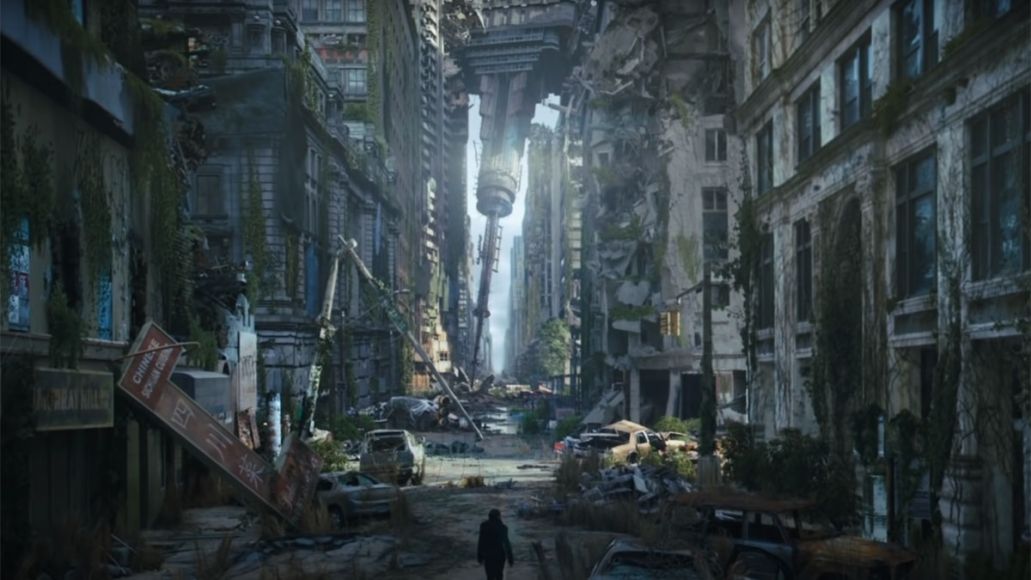 Establishing these new ruling bodies, and how they’ve stitched together this new society, is where DMZ is its most successful — yeah, the DMZ doesn’t seem like the safest place to live, but hey, there’s a commune in the Cloisters ruled by Nora Dunn, which sounds like a pretty sweet living situation no matter what the circumstances. And that’s just one of the fascinating little pockets of humanity which come out in the series — as little information as we’re given about the political circumstances which created this world, we get plenty of details about what daily life is like.

For as compelling an actress as she is, Dawson doesn’t get starring roles like this nearly often enough, and it’s a damn shame because she really delivers every layer necessary to sell this character living in this world: tough and vulnerable in equal measure, able to deliver sympathy or a punch as needed. The rest of the supporting cast holds together well, with Hoon Lee’s Wilson emerging as perhaps the standout — a character fully aware of his past and how it doesn’t mean anything for the future.

This is the sort of project where the production team can really go to town in crafting the details of this world, and cinematographer Matthew J. Lloyd and production designer Scott Dougan do in fact make the most of creating this new world out of the ashes of the Manhattan we might know or remember. The vibe is decidedly I Am Legend without quite so much pathos, because this city might be in ruins but for so many people, it’s still home, and seeing that element come out gives this series its hopeful edge.

DMZ Creates a Compelling New World, But Only Feels Like the Beginning of the Story: Review