A Zoom malfunction meant we had to restart midway through our conversation, but Oscar-nominated composer Germaine Franco was more than understanding — because Encanto was a COVID production. “Usually you want to be in the same room so everybody’s listening to the same mix, the same speaker, the same environment,” she tells Consequence via Zoom. “But I was presenting cues on Zoom, and everyone had different headphones. It was so tricky to say, ‘Okay, I’m going to play this. I have no idea what it sounds like on your end.'”

Prior to Encanto, Franco’s film work included The Book of Life, Dope, Tag, and Coco — her Oscar nomination this year, for the lively Colombian-influenced score of Disney’s latest animated feature, makes history, as she’s only the sixth woman ever to be nominated for composing an original score, and the first woman of color. She’s also the first woman to ever individually compose the score for a Disney animated film.

While many composers take on multiple projects at once, Franco does her best to only do one at a time. “On Encanto, I turned down a lot of work. I felt it was very important. I wanted to focus on this and give it all my attention. So I think it was a good choice.”

Franco wasn’t able to say what her next project is, but in the interview below, transcribed and edited for clarity, she takes us behind her path to becoming a composer, the work she put into involving Colombian instruments and Latin musicians in the film’s sound, and how long a music cue intended to introduce one of songwriter Lin-Manuel Miranda’s songs needed to be.

Elsewhere, she addresses the fact that at this year’s Oscars, the category for which she’s nominated, won’t be presented as part of the live ceremony. She also explains how she approaches being someone known often for being “the first” — and why she’s feeling more optimistic these days about people of color and women advancing in this field.

Tell me about your origin story. How did this end up being the path you followed?

I started playing piano and percussion as a young girl and was in band and orchestra, marching band, concert band. Any ensemble I could find, I loved it. That was what I wanted to do, I just had a passion for music. I played in the El Paso Youth Symphony, went to Rice University, studied at the Shepherd School of Music — I was training to be an orchestral percussionist.

Later I wound up, while I was in school, having a band and earning money with an ensemble, playing different events and concerts and wound up writing, you know, charts and arrangements. Then I worked in theater, and through theater, I got into film. My first film I worked on in LA, through Universal Hispanic Film Project, and loved it — I was on the Fox scoring stage for my first film with Armin Steiner, who’s an amazing mixer, mixed hundreds of films, and he called ASCAP and said, “You gotta hear this person.” So that’s how I got into film.

Do you feel like your style as a composer would be different if you’d started from some other place, like as a rock musician?

Yes, I think so. I mean, I think all your experiences musically shape you as an artist, and everybody has their own style. I didn’t know that while I was playing in an orchestra and orchestrating that I would be landing here, but all those experiences lead you to this place.

So, you know, I played in orchestras in Italy and in Berlin and also in Texas, and all of those experiences were fantastic, but I was also playing in all these Latin jazz bands, hanging out late at night in jazz clubs. I think the two meshed together and gave me my sound.

In Encanto, I’m working with many musicians that I played with for over 20 years, like Federico Ramos, who’s the voice and the hands of Coco guitarist Miguel. He’s a frequent collaborator. And Luis Conte, who’s on so many albums — he plays with James Taylor, he played on tour with Madonna, Phil Collins, just everyone you can think of. And then Alex Acuña, who was, you know, in so many groups and records.

All of these people that I’ve worked with for many years are still playing on the sessions, and we just have an amazing time when we’re together. It’s great.

One of the most exciting things about music is what a collaborative medium it is in a lot of respects — what was the collaboration like on Encanto specifically?

It was great — it was tricky, because it was during the pandemic. So the whole process was different than we would normally approach it: Starting off, I received all of Lin’s demos in the different states that the songs were in and those lyric changes, and story changes we were involved with while working with Jared and Byron, the directors, and the producers, Clark and Yvette.

Basically, we would just have so many calls about the story. We were always, always focused on the story. And then once I started working on the score I went off and was working on themes and ideas for getting this specific sound called magical realism. And how could we relate that into music?

Jared and Byron and Lynn had been to Colombia and I wasn’t able to go. So I had to bring Colombia to me. I had many instruments made — a marimba, I had a Colombian harp and many drums and string instruments. Just brought them into my studio as I was experimenting and getting into this style. Then I would come up for air and say, “What do you think of this? What do you think of that?”

And then Lin would listen and the directors, and finally, after everybody got vaccinated, we got to be in the same room. That was exciting, to show the work on the big stage at the Disney theater. And what a great creative group. I mean, it’s just been amazing the whole time, just so many beautiful images. Jared and Byron made this beautiful movie, and all the animators who worked on this just gave it their all in the middle of the pandemic, which makes it even more special.

When you heard the songs for the first time, to what degree were you listening for themes that you could bring into the overall score?

Well, when I heard all the songs, I loved them immediately and I loved being able to listen to the original demo and then hear this stuff that Mike Elizondo worked on and then see how it was progressing. We did talk about, “Should we use some of the themes in the score?” But I wound up not doing that because Jared and Byron wanted an overall Encanto theme, and they felt like they wanted that to be separate and more nostalgic.

So what I did was make sure that the score used the same kind of language of the songs, in the sense of how they were arranged and orchestrated. And I also would write little score intros into a song so that you couldn’t tell that the songs were starting. It just sort of went seamlessly from score to song.

Because there are so many songs, we did talk about that, taking bits and pieces, but I guess what they wanted was a theme that represented the Encanto, the place and the magic, and all of the songs were so amazing and they just felt like, let’s just limit the themes that Germaine does, but then we’ll have this one theme. So at the end, when Mirabel gets her door, you hear that whole theme blossom. You hear it from the very beginning and at the end you hear it as well, in a different form. 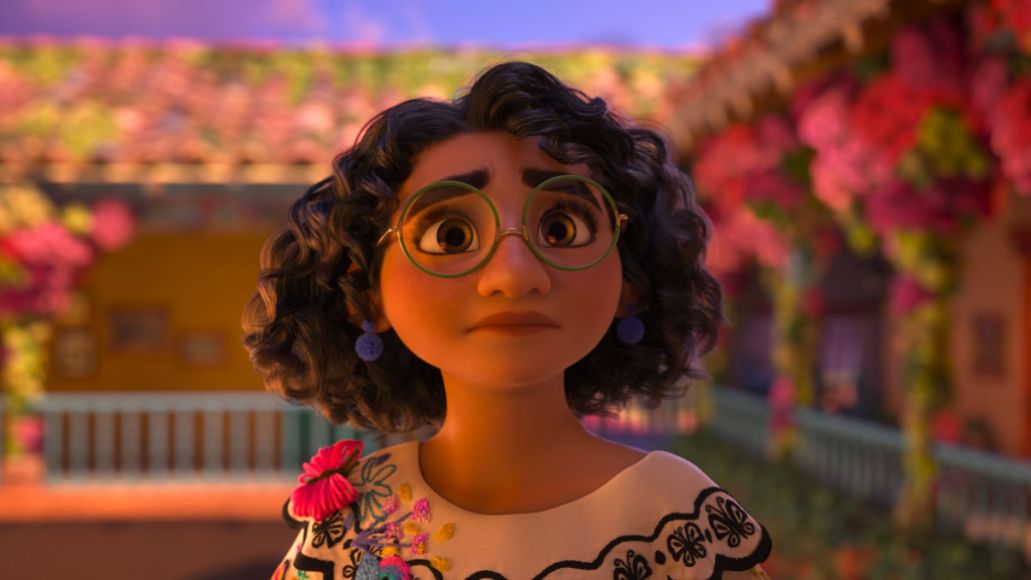 Writing the transitions into the songs feels pretty important because that transition point always seems so tricky, because you’re basically queuing the viewer into “yeah, we’re changing things up now.”

Yeah. That took a lot of finesse. I would try different things, see what the filmmakers liked, see if Lin liked it. Once we got, like, 30 seconds before a song, I’d already have tapered off out of the previous cue, and so the new cue was in the world of his song — even the key of his song. So harmonically, I would work on that as well, and use the same instruments that he had in the song, like the “Bruno” song. I tried really hard to get a piano that sounds similar to the piano in the song, so that you couldn’t really tell when that was starting.

Encanto Composer Germaine Franco on the Magic of Collaboration: "We Felt Like We Had This Amazing Gift"