HBO has set a release date for its first Game of Thrones prequel series, House of the Dragon. The 10-episode first season will premiere Sunday, August 21st on HBO and will be available to stream on HBO Max.

Taking inspiration from George R.R. Martin’s 2018 novel Fire & Blood, the prequel will chart the downfall of the famed House Targaryen centuries before the start of the original fantasy series, including the Targaryen civil war known throughout Westeros as “the Dance of the Dragons.”

Along with revealing the premiere date, HBO has shared several new photos from the show, including first looks at Rhys Ifans’ and Paddy Considine’s characters. Check those out below.

House of the Dragon is the first of several Game of Thrones spin-offs on the day. Other upcoming titles include The Sea of Snake, about Lord Corlys Velaryon; 10,000 Ships, about warrior queen Princess Nymeria; A Knight of the Seven Kingdoms, based on Martin’s fantasy novels Tales of Dunk and Egg; and a dramatic animated series called The Golden Empire. 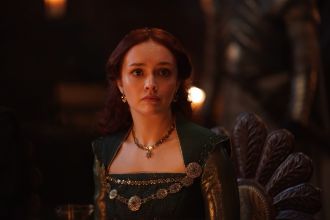