When revisiting The Hunger Games, the best way to do it is to consider the adults. The 2012 adaptation of Suzanne Collins’ best-selling YA novel brings to life the story of Katniss Everdeen (Jennifer Lawrence), a young woman forced to participate in her dystopian society’s annual pageantry of death. But the movie’s omniscient eye brings out a deeper resonance in the story, one that offers up an uncomfortable look at ourselves.

Like many books of the genre, Collins’ novel is told entirely from the point-of-view of its protagonist: We meet Katniss as she volunteers in place of her sister for the titular “games,” in which two teenagers from each once-rebellious district of Panem fight in a battle royale that’s packaged as entertainment for the masses.

While the film (released on this day in 2012) covers each beat of the book’s story with a great deal of fidelity, the biggest change is that director Gary Ross — who co-wrote the adaptation with Collins and Billy Ray — chooses to expand the film’s focus beyond just what’s within reach of Katniss’s eyes and ears.

This gets established right from the beginning, as the film delays Katniss’s introduction for a few key moments. Following a series of title cards explaining the circumstances which have led to the creation of the Hunger Games, the opening scene introduces talk show host Caesar Flickerman (Stanley Tucci) interviewing Seneca Crane (Wes Bentley) about this year’s upcoming event. 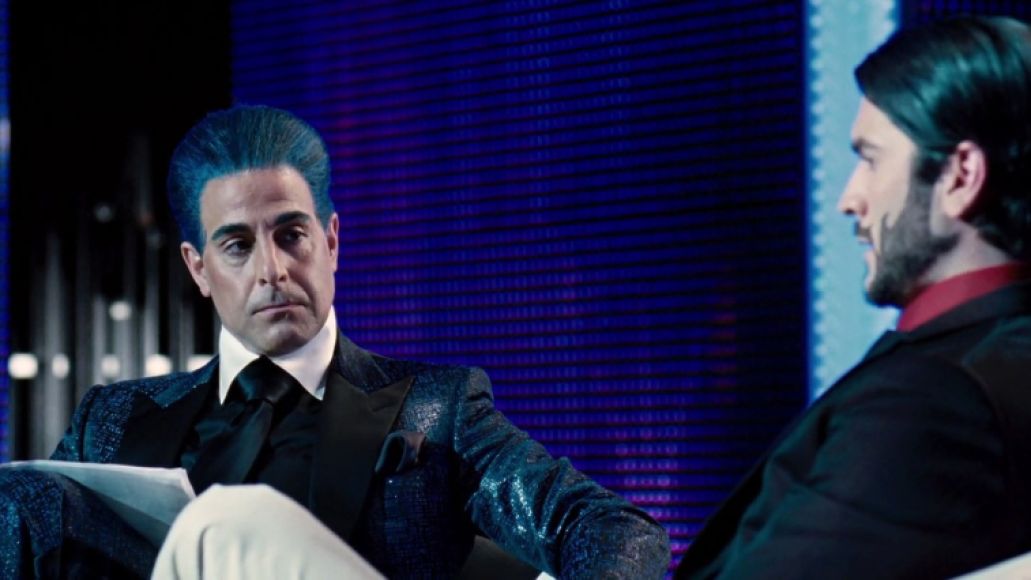 It’s a perfect introduction to this new world, because of how similar it feels to our own. While Caesar’s pompadour and Seneca’s beard are aesthetically outside the norm, Tucci’s performance in particular nails the slightly plastic feeling of too-committed on-camera talent, especially when balanced opposite Bentley’s more reserved charms. They’re two media professionals, at the top of their game, being watched by millions as they talk about the Hunger Games like it’s a company picnic three-legged race, and not an annual extravaganza of child murder.

The Hunger Games Might Be a Young Adult Story, But It Has a Lot to Say About Grown-Ups