Ukrainian metal act Jinjer have canceled their Spring 2022 US tour — including a high-profile run supporting Slipknot — as they focus on the war that has broken out in their country. The band has also launched a new merch capsule to raise money for Ukraine.

Jinjer were slated to be the opening act on the first leg of Slipknot’s “Knotfest Roadshow” US tour. In addition, they were set to play some off-day shows with fellow support act In This Moment, as well as a number of headlining dates of their own.

Unfortunately, the band’s attention has turned to life-and-death matters following Russian President Vladimir Putin’s decision to send troops into Ukraine last week. When the war first broke out, Jinjer released a statement that read, in part, “Putin started the war against the sovereign and independent Ukraine. … NOTHING can justify the violence and death of innocents, and this is exactly what’s happening in our country right now.”

As part of Jinjer’s campaign to raise money for humanitarian relief in Ukraine, the band has introduced two new T-shirt designs, with one combining the band’s saw-blade logo with a peace symbol, and another with the words “We Want Our Home Back.” Both t-shirts are available here., with all proceeds benefitting charity organizations chosen by Jinjer.

“Thank you all for your concerned messages and prayers sent to us over the last week, we may not answer but we are reading them and they mean the world to us,” stated Jinjer bassist Eugene Abdukhanov. “As you know, there is war raging through the streets and cities of Ukraine right now. Many people have little or no food or water and are very afraid of what tomorrow may bring.”

He continued, “Together with Napalm Records, we’re releasing two new T-Shirt designs to raise funds to be donated to various charities throughout Ukraine to help with medical and food supplies, water and so on. If you cannot donate then please share this or any news related to what’s really happening here. Each sale may save somebody’s life in Ukraine. Thank you.”

Beyond the Boys’ Club: Tatiana Shmayluk of Jinjer

The first leg of “Knotfest Roadshow” will still launch on March 16th featuring Slipknot and In This Moment, with tickets available here. Update: Metalcore band Wage War have just been announced as Jinjer’s replacement on the tour.

As of now, Jinjer’s late-spring Latin American tour and summer run of European festivals are still on.

See Jinjer’s charity T-shirt designs below, and order them at this location. A video message from bassist Eugene Abdukhanov can also be seen below. 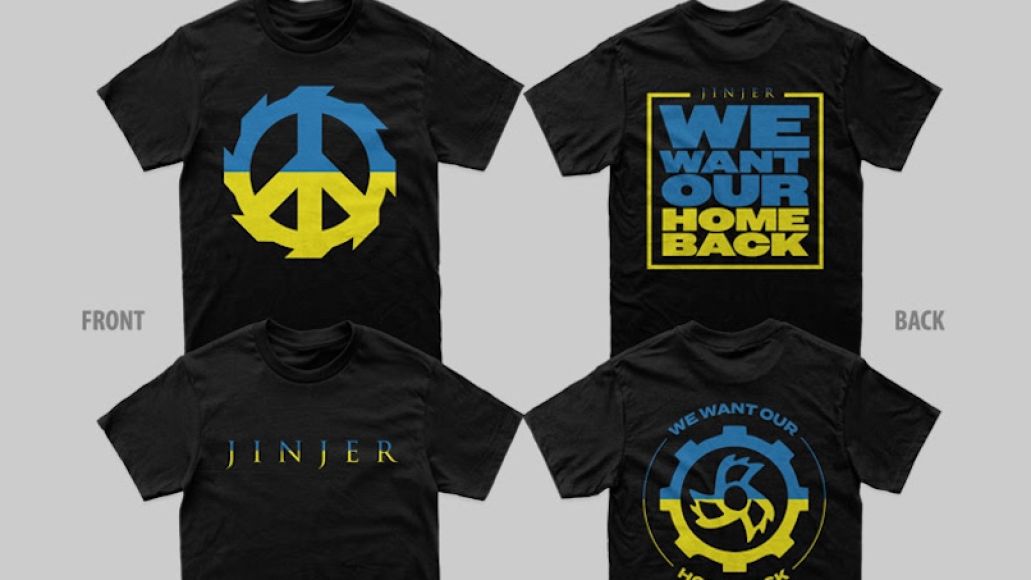