The Pitch: Loretta Sage (Sandra Bullock) is an academic-turned-romance novelist whose many books feature the exploration of ancient ruins and a hero named Dash, brought to life on the covers of her books by a nice-and-handsome-yet-maybe-not-too-bright man named Alan (Channing Tatum).

But while Loretta’s contemplating giving up on writing, due to her ongoing grief over the recent death of her archeologist husband, one of her “fans” decides to make her life interesting. Due to some details included in her newest book, the very rich and very deranged Abigail Fairfax (Daniel Radcliffe) believes that she has the archeological expertise to actually find a lost treasure on a remote Atlantic island, and so he kidnaps her, whisking her away to said island and demanding she use her knowledge of the island’s ancient folklore to help him.

Alan, determined to prove that he’s not totally useless, enlists the help of a savvy adventurer (Brad Pitt showing up for a fun lil cameo) to help Loretta escape Fairfax’s clutches, but soon the two of them are alone in the jungle, fighting for their lives — and, as often happens when two attractive people are alone in a jungle together, fighting for their lives, a connection blossoms even as Fairfax continues to pursue them…

Yeah, That Might Sound Kind of Familiar: The “romance novelist goes on an adventure out of her romance novels” genre isn’t a particularly expansive field, but it is a pitch that Hollywood has bought more than once or twice. So amongst the many challenges faced by The Lost City is finding a way to take this familiar premise — one where previous examples like Romancing the Stone remain pretty iconic — and make it fresh. 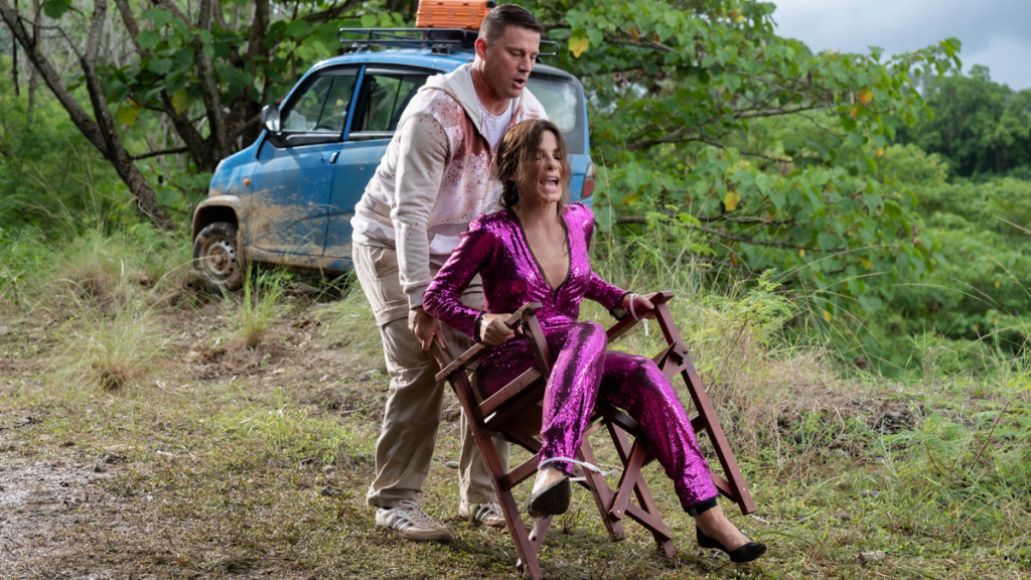 Fortunately, directors Adam Nee and Aaron Nee manage to find just the right balance between action, comedy, and romance to make all three work harmoniously together, while playing with a team of all-stars who make the material sing. The Lost City didn’t have to go so hard to be so successful, but the extra effort is what ensures that this film might actually endure in our memories, unlike other, more forgettable attempts at this story.

That Cast: Sandra Bullock is one of our great living physical comedians, though she doesn’t get nearly enough recognition for this facet of her stardom. So, if nothing else, watching her contend with her true enemy in this film — the sparkly pink jumpsuit that she wears for a good percentage of it — is a wonderful reminder of this fact. It’s not just the fact that she’s wearing it, but how it affects her physicality: One of the film’s earliest jokes is just Bullock in that jumpsuit, trying to get onto a stool, and it kills.

Oh and also, she deserves an Oscar just for navigating nearly the entire film in heels. Even when the film (accidentally or on purpose, it’s hard to say) references her iconic stumble from Miss Congeniality, it’s still a treat to see how Bullock takes these tools and wields them like Chaplin with his cane and bowler hat.

The Lost City Review: A Familiar Yet Charming Star Showcase for Sandra Bullock and Channing Tatum