Setting the Stage: Norwegian black metal legends Mayhem have been around for more than 35 years, which is pretty epic considering their tumultuous history that includes murder and suicide (as depicted in the 2018 film Lords of Chaos).

The extreme metal act’s “The Sanguine Sodomy of North America” tour kicked off March 7th in San Francisco as one leg of a massive world tour, and hit Los Angeles the next night on March 8th. (Heavy Consequence was present for both shows, with a photographer in San Francisco and a reporter in L.A.). The North American leg runs wraps April 3rd in Joliet, Illinois, with tickets available via Ticketmaster.

Mayhem originally set up the outing as a co-headliner with Swedish black metal veterans Watain. Unfortunately, just days before the tour was set to begin, Watain had to drop out due to visa issues.

Taking the Stage: Mayhem’s set was essentially a retrospective of their long and storied career presented in three acts complete with costume and set changes. The band fully embraces the theatrics of black metal, which helps make the show such an immersive live experience.

The first act of Mayhem’s set consisted of newer material, opening with “Falsified and Hated” from their latest studio album, Daemon, which landed at No. 1 on Heavy Consequence‘s Top Metal & Hard Rock Albums of 2019. With its spastic opening riffs that veer into a churning atmospheric dirge, it was a great choice. The song embodies the band’s style, which hasn’t wavered much over the years. Act One wrapped up with “Voces Ab Alta,” a track off their recent Atavistic Black Disorder / Kommando EP.

Then the stage went dark and creepy music played as the band prepared for Act Two. The lights went up revealing a backdrop change from a disturbing depiction of Jesus to an ominous cathedral with upside-down crosses. Lead singer Attila Csihar changed from a red pope-like robe to a black ritual style one with the guitarists flanking him on either side in hoods like evil monks. Mayhem had very little banter between songs, as they let the music do the talking.

The band then went into one of their more famous (or possibly infamous) songs, “Freezing Moon,” from their iconic debut album De Mysteriis Dom Sathanas. One got a reverent feeling as the band continued to blast through the older material with audience favorites like “Pegan Fears.” Its intricately speed picked intensity was very well executed by current guitarists Charles “Ghul” Hedger and Teloch. Of course, they were accompanied by the thundering bass of founding member Necrobutcher, as a mosh pit broke out within the crowd.

Act Three began with the instrumental opener “Silvester Anfang” from the 1987 Deathcrush EP. Now bathed in red light with a red banner emblazoned with a giant Mayhem logo behind them, the band launched into some true Norwegian black metal from back in the day, including the title track from Deathcrush as well as “Chainsaw Gutsfuck.” By this time, Mayhem had taken off their robes and masks, allowing fans to finally see their full faces. They threw in the “Freezing Moon” split single “Carnage” and ended the set with the short but brutal “Pure F**king Armageddon,” the last track on Deathcrush. The song served as a proper closer, as that’s exactly what the audience experienced during Mayhem’s set — pure f**king armageddon.

Solid Support: Midnight, the one-man blackened speed metal band from Ohio formed by multi-instrumentalist Athenar, was an interesting choice for the opener. Of course, there was supposed to be Watain in between, which would have bridged the gap a bit more between Midnight’s black metal party music and the hypnotic and brutal reverence that was Mayhem. Both Midnight and Mayhem also played longer sets to make up for their absence.

Midnight is certainly fun as the three-piece they have become for live shows. They found a hell of a drummer and have some good chemistry on stage despite being born of a one-man project. Their faces were covered in masks somewhere between bondage and Leather Face as they plowed through their succinct brand of punk beats with thrashy guitars and shouted vocals.

“Hello Los Angeles, City of Evil Angels,” Athenar remarked as they kicked off their insanely loud set with “Black Rock’n’Roll” from the Complete and Total Hell compilation. They certainly make “music to start fights to,” as their record label Metal Blade puts it, as they had a very decent pit going.

After some sound issues with the vocals and bass, Athenar quipped, “Can you hear the vocals because what I’m saying is very important.” With song titles like “Who Gives a F**k” and “Evil Like a Knife” it is clear they don’t take themselves too seriously.

Overall, despite the absence of Watain, fans were treated to a full evening of brutal in-your-face metal music.

Photo Gallery – Mayhem and Midnight (click to enlarge and scroll through): 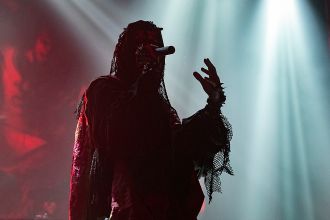 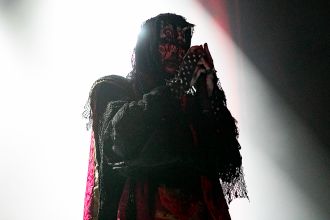 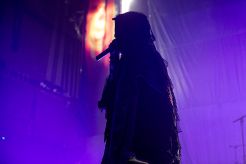 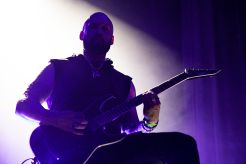 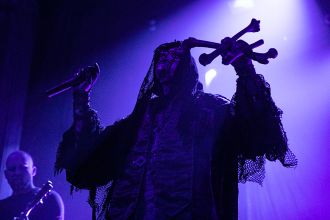 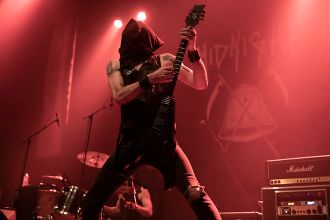 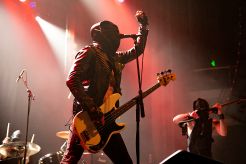 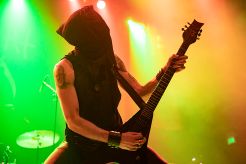 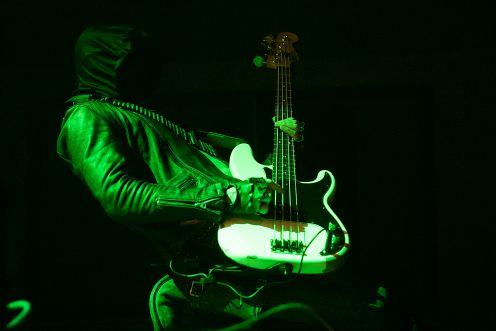