The Pitch: The first trailer for Morbius, the newest effort by Sony Pictures to hold onto the Marvel characters to which it still owns the rights, originally premiered in January 2020, in anticipation of its planned July 2020 premiere.

That premiere didn’t happen for, y’know, reasons, but in the literal years since, new trailers for the film have continued to appear online and in theaters, with one of them buttoned by a reasonably funny joke: Its central character, in full monster face, growling “I… am… Venom!” at a thug, then abruptly shifting to a smile to say, “I’m just kidding! Dr. Michael Morbius, at your service.”

That moment didn’t just name-drop a previous Sony/Marvel collaboration, but showcased a clever reversal on expectations, not to mention star Jared Leto doling out some very welcome charisma. Aired repeatedly over the last several months, “Dr. Michael Morbius, at your service” was a promise that Morbius wouldn’t take itself too seriously — that it might even have a little fun.

Unfortunately, in the final film, when that moment arrives, it’s without the second half of the line. Whether it was cut for time or cut for tone, its absence is a microcosm of the elements which ensure that Morbius, at best, will be remembered as the latest effort on Sony’s part to make its nascent Sinister Six franchise happen. And, like “fetch,” it’s hard to see that happening.

Meet the Marvel Universe’s Version of a Vampire: In Morbius, the titular individual is a brilliant doctor with a mysterious blood disease that’s led to poor health and the need to use crutches his entire life; his search for a cure leads him to the vampire bats of Costa Rica, which he collects in the film’s opening sequence and brings back to his New York lab in the hope that their ability to metabolize blood can fix his own.

It’s hardly much of a spoiler to say that the good doctor is successful in his efforts, but as he discovers after administering the cure to himself, it has a lot of side effects: some good, like bat-inspired superpowers including echo location and enough wind sense to fake your way through flying. Some bad, like an all-consuming need to consume human blood.

Michael’s cure is of extreme interest to his childhood best friend Milo (Matt Smith), who suffers from a similar condition, and isn’t too bothered by the downsides that come with it. A more daring film would perhaps be more engaged with the ethical questions posed by the scenario, but Morbius is too focused on getting through its paint-by-numbers origin story plotting to take the time to consider that. Instead, the plot moves quickly through Morbius getting his powers, followed by him trying to cope with them while also dealing with Milo’s lust for power. 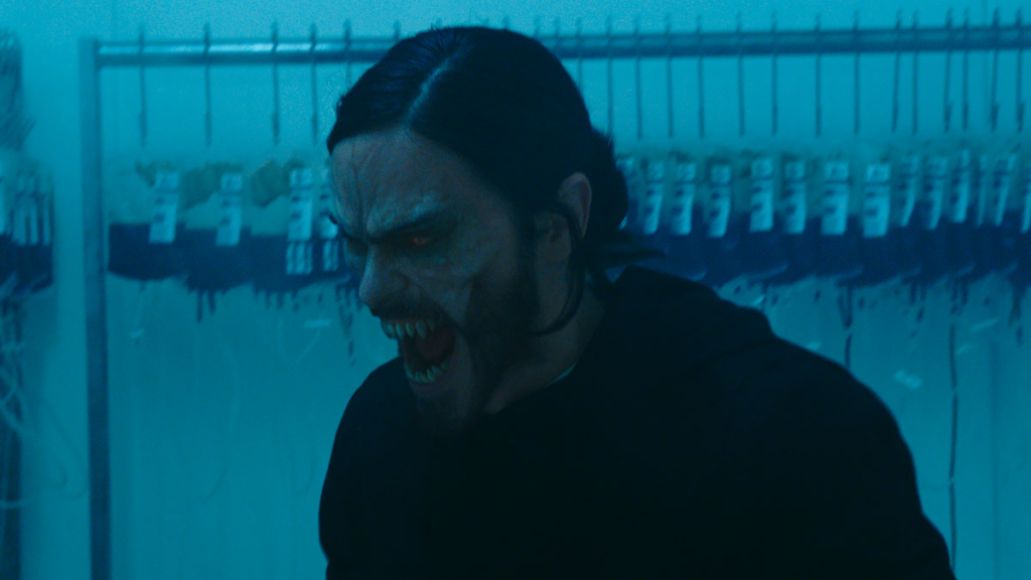 Jared Leto’s Most Grounded Performance in a Long Time: That feels like a strange thing to say about a movie where the Oscar-winning star plays a blood-guzzling super-vampire. Yet in comparison to his tWiStEd take on the Joker and whatever the hell you call what he was doing in House of Gucci, Dr. Michael Morbius feels like a nice chill guy you’d want to have a beer with.

Leto doesn’t phone in his performance and the chemistry between him and fellow doctor/requisite ladyfriend Martine (Adria Arjona) is solid. But while he seems remarkably centered in who Michael Morbius is as a character, the audience is left clueless beyond flashes of genius and wit. Initially, the character’s goal is to find a cure for his disease; once he does that, though, the film is so busy motoring through the awkward plot’s chain of events that the question of what he wants now isn’t clear.

Beyond taking down the bad guy, of course — and for the record, of all the film’s problems, Smith’s work is not one of them. The former Doctor and Crown star commits with relish to Milo’s circumstances, wearing his aforementioned snazzy suits (really, all of Milo’s ensembles in the film are pretty flawless). Has Smith ever given an actually bad performance? Nothing comes to mind, perhaps because it’s never happened.

Morbius Review: Maybe It’s Time for Sony to Give Marvel Back Its Toys