There are several things that Muse are willing to share at this time, such as the name of their upcoming album, Will of the People, its release date of August 26th, and the band’s newest single, “Compliance.” There are also several things that the English rockers are purposefully choosing to conceal, including what, exactly, they were thinking when they turned to those loaded words. But it seems increasingly likely that Will of the People will mark a turning point for the band; that they are either about to charge into a political fight that will cost them a swath of their audience forever; or expose a hollow nothingness at the center of their whole artistic project.

At first glance, the tracklist for Will of the People certainly seems politically aware, with multiple songs that might reference one of Muse’s favorite themes: the individual’s struggle against unjust systems. In addition to the title track, “Compliance,” and recent single “Won’t Stand Down,” there are also songs called “Liberation,” and “Kill or Be Killed.” Other titles might serve just about any occasion (“We Are Fucking Fucked”), and some must remain opaque for now, including “Verona,” which could be about anything from a nice vacation to Romeo and Juliet to the Everett Massacre on Bloody Sunday.

To provide context, the band has shared a carefully-worded statement. Will of the People “is influenced by the increasing uncertainty and instability in the world,” they wrote. “A pandemic, new wars in Europe, massive protests & riots, an attempted insurrection, Western democracy wavering, rising authoritarianism, wildfires and natural disasters, and the destabilization of the global order all informed Will of the People. It has been a worrying and scary time for all of us as the Western empire and the natural world, which have cradled us for so long are genuinely threatened. This album is a personal navigation through those fears and preparation for what comes next.”

That’s a lengthy list of topics that many people worry about, and it’s tempting to parse the wording — to guess who “rising authoritarianism” is meant to reference, or to read deeply into phrases like “an attempted insurrection” and “pandemic.” Perhaps you think you know exactly what Muse meant, and perhaps you’re right. Still, the band could have been more explicit, but they chose to leave it open to interpretation.

Even the new song, “Compliance,” doesn’t dispel these mysteries, though it is undoubtedly concerned with the idea of mandates, even if it doesn’t take a stand on mandates for masks or vaccines. “Fall into line, you will do as you’re told,” Matt Bellamy sings, “No choice fatigue, your blood is running cold.” The chorus is more of the same: “Compliance/ We just need your compliance/ You will feel no pain anymore/ And no more defiance.”

Muse have also shared a statement on “Compliance,” though like their paragraph on Will of the People, it is at least somewhat open to interpretation. They wrote,

“‘Compliance’ is about submission to authoritarian rules and reassuring untruths to be accepted to an in-group. Gangs, governments, demagogues, social media algorithms & religions seduce us during times of vulnerability, creating arbitrary rules and distorted ideas for us to comply with. They sell us comforting myths, telling us only they can explain reality while simultaneously diminishing our freedom, autonomy and independent thought. We are not just coerced, we are herded, frightened and corralled to produce a daily ‘2 minutes of hate’ against an out-group of their choosing and to turn a blind eye to our own internal voice of reason & compassion. They just need our Compliance.”

Lest there was any doubt that Muse’s ambitions are political, “Compliance” comes with a music video chock full of hot-button imagery. There are at least two kinds of masks being worn — creepy, sagging-skin masks as well as golden face shields — and some of the characters in the video are enraptured by floating pills.

It’s easy to interpret “Compliance” as vaccine skeptical, and many people have; even before the song’s official release, social media was full of people sharing the name of the track, either celebrating or jeering this apparent political stand. Consequence reached out to Muse for clarification, and were told that the band had no additional comment besides their official statements.

Even their past remarks aren’t a helpful guide. Vocalist Matt Bellamy has called himself a “left-leaning libertarian.” Long ago he claimed that 9/11 was an inside job, though he later walked that back, and he’s pushed back against attempts by the far-right to co-opt Muse’s music. During the COVID-19 pandemic, he also gave one interview where he seemed to be looking forward to a vaccine, and at another time he paid tribute to his cousin, a doctor on the pandemic’s front lines.

Time will tell where Will of the People lands. Perhaps the band is counting on plausible deniability, hoping songs like “Compliance” work as a Trojan Horse for unpopular ideas about vaccine mandates while avoiding a discourse that will cost them liberal fans. Perhaps the band is merely hoping to comment on right-wing rage, drawing inspiration from heated emotions without alienating their right-leaning audience. Or perhaps the release of Will of the People will end the mystery, and find the band vigorously defending ideas that they believe in.

But it’s strange to see Muse acting so cagey. This is a group that named a whole album The Resistance, whose Drones commented on the Obama-administration’s drone war policies, who said that “Thought Contagion” on their last album, Simulation Theory, was inspired by the supporters of Donald Trump.

Not only have they never shied away from political commentary, the weight of their catalog rests on a battle against injustice. It’s as if a shark-repellent company, faced with a shark for the first time, released a statement refusing to comment on whether sharks are good or bad. Perhas Muse are attempting an act of contortion, rarely possible for people with backbones, of making music that seems provocative without pissing anyone off.

Check out the music video for “Compliance,” and peruse the album artwork and tracklist below. Will of the People arrives August 26th, and pre-orders are ongoing.

Will of the People Artwork: 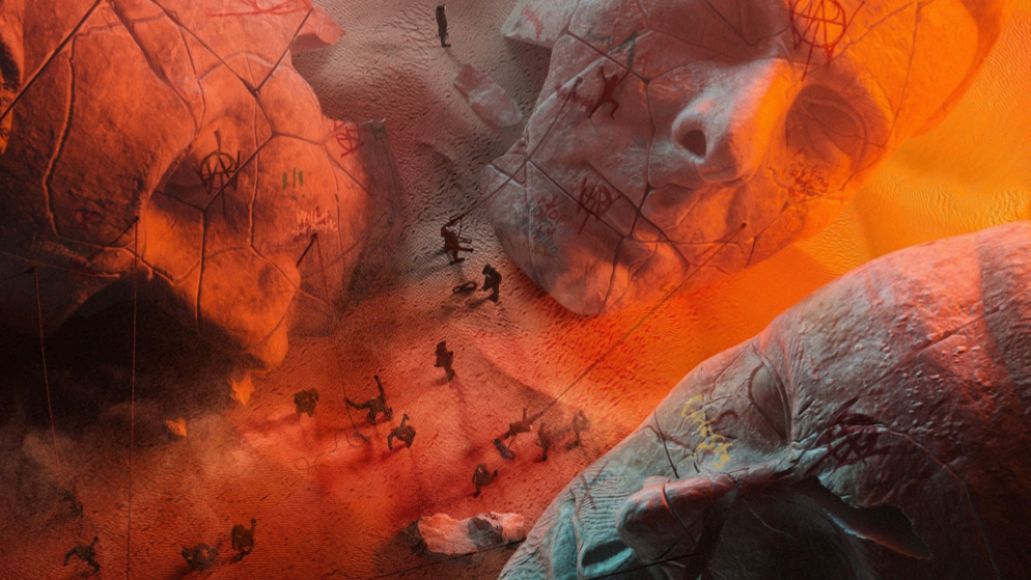 Will of the People Tracklist:

Uh Oh, Muse Announce New Album Will of the People with Song "Compliance"