“There’s, like, a different vibe in here.” So remarked host Amy Schumer towards the end of the 94th annual Academy Awards, after an emotionally exhausting night that did deliver a lot of surprises. Perhaps not the kinds of surprises that anyone watching was hoping for, because as the show creeped past the three-and-a-half-hour mark, what was striking was how the Oscars managed to make the handing out of actual Oscars feel like an afterthought.

In the minutes before the Oscars began this year, the vibes were not great due to the controversial choice to eliminate eight categories from the live broadcast (instead handing those awards out an hour before the official ceremony started, and then editing the winning acceptance speeches into the show later). In concept, an idea which might trim some screen time, but in the end, led to a situation as nicely summarized by Knives Out director Rian Johnson before the show even started:

I knew this was absolute bullshit, but the full metric volume of bullshittyness is only landing for me now, as I refresh my twitter feed to see what craftspeople are winning oscars while a red carpet fashion show plays on ABC. https://t.co/ESIttmvlum

This is perhaps where the night went off the rails to begin with, because the problem with eliminating aspects of the show that have always been a part of the live ceremony (like, say, eight actual awards) is that it puts every. other. part that did make the cut under scrutiny. Such as, for example, the Internet-determined Fan Favorite and Cheer-Worthy Moment awards, which ended up being a farce overrun by extreme pockets of fandom demanding attention for Zack Snyder and Johnny Depp, and a complete waste of time and energy.

In the end, so many of the ideas and innovations promised over the course of the night were well-intended in nature but ultimately fell flat, with the most notable moment of the night having no connection to the awarding of an actual award, and the ceremony ultimately not managing to do the one damn thing it was supposed to do: truly celebrate the best movies of 2021.

Perhaps it was the earlier tension over the awards which led to some of the chaos. Even without Will Smith punching Chris Rock, the vibes, in general, were rough, with some jokes that perhaps went a little too far (what did The Last Duel do to anyone to deserve being called out like that?) and a few bits that felt mired in awkwardness.

The issues with the night might best be encapsulated by the In Memoriam section, traditionally a somber point in any awards show. For this year’s ceremony, though, the producers took a bold approach in enlisting The Samples Choir to perform a relatively upbeat medley of songs, interspersed with some personal commentary from Tyler Perry, Bill Murray, Jamie Lee Curtis, and a tiny puppy on the specific passings of Sidney Poitier, Ivan Reitman, and Betty White.

On paper, the idea of trying to keep the theme of celebration going through this portion of the show wasn’t necessarily a bad one. But it fell apart due to, if nothing else, the staging: It was pretty hard to focus on the names and photos being displayed on the stage’s giant screen, because there were people singing and (more importantly) dancing in front of it.

Dancers on stage for a fun (if strangely rewritten) live performance of “We Don’t Talk About Bruno”? Great idea. Dancers on stage when we’re trying to honor those who died during yet another long, hard year of COVID? Less effective.

The hosting was overall uneven, as Schumer, Wanda Sykes, and Regina Hall all proved to be exceptionally game for anything, and when the hosts all seemed to be on the same page — as they were in a King Richard sketch that was, ironically enough, about how they weren’t on the same page — they made for a pretty effective team.

But the early recurring bit of “Regina’s single and looking to mingle” started feeling uncomfortable even before Hall started feeling up Josh Brolin and Jason Momoa on stage, and that aforementioned Last Duel jab came as part of a props-based run of jokes by Sykes and Hall that, like so much props-based comedy in the past, just felt gimmicky and off-putting.

Of the three, Schumer perhaps came out looking the best, thanks to some well-crafted jokes that hit hard at a few nominees (including a jab at how deeply unfunny Being the Ricardos was), descending from the ceiling Spider-Man style when the occasion called for it, and, as mentioned above, delivering probably the best possible response a host could manage to the way things went off the rails by the end. 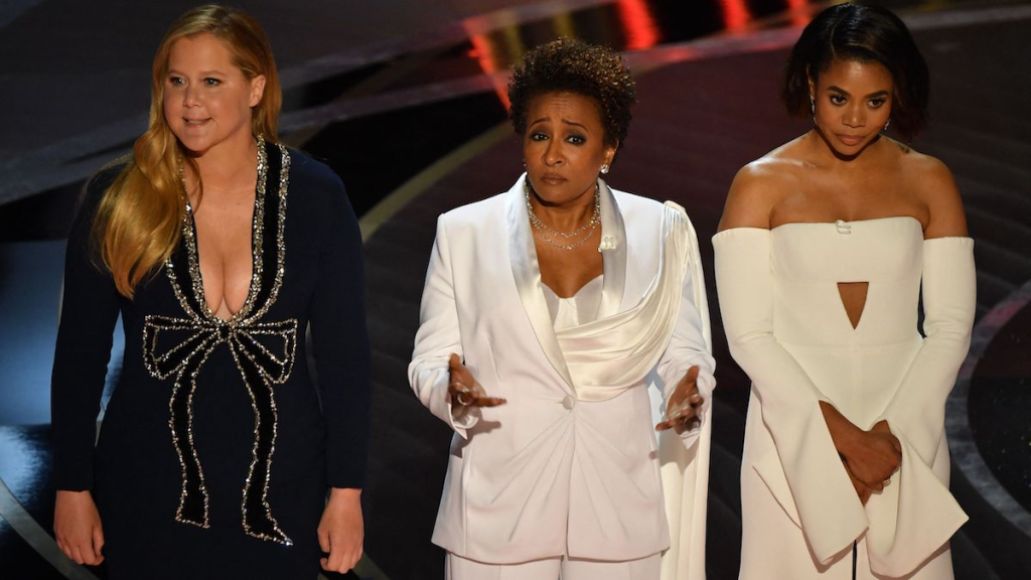 Because let’s talk about the Will Smith of it all. Like all wildly unscripted moments of television, the initial response as a viewer at home to the audio drop-outs and confusing jumps between camera angles was to assume that this was a poorly planned scripted bit or that something truly weird was going on. Then, thanks to the spread of unedited clips from the international broadcasts of the show, we understood how simple this event was: Rock made a rough joke at the expense of Jada Pinkett-Smith, and Will Smith hit him as a result.

Before tonight, the entire world might not have been familiar with the fact that Jada Pinkett Smith’s alopecia was the reason for her shaved head, or that this isn’t the first time Chris Rock poked hard at the Smiths from the Oscars stage. It’s context we now have at our fingertips, thanks to shocked viewers trying to understand why one of the world’s most bankable movie stars would do something so seemingly uncharacteristic.

It’s unfortunately going to be what people remember about this night, though, an unpleasant scene that overshadowed every moment of triumph which followed, starting with Questlove receiving a well-deserved award for his documentary Summer of Soul (the award Rock was there to hand out in the first place — if you were paying attention to Questlove’s speech and not frantically scrolling through Twitter trying to figure out if Rock was slapped or punched, good for you, glad at least one person was).

The moment certainly hung over Smith’s teary acceptance speech for Best Actor, a hastily assembled apology to the Academy that may have done the work it needed to do. He certainly did seem to mean it, though whether this incident will have further repercussions is an unresolved question that probably won’t get resolved tonight. Perhaps it’ll just be water under the bridge, just a wild moment of trivia to look back on five or 10 years from now.

For those of us in the audience, after all, that’s what this awards show always eventually becomes: a list of winners, additional trivia for the memory banks. But for those winners, not to mention the nominees in attendance, the Oscars are so much more.

It’s the culmination of a lifetime of effort to make it into that room, let alone to arrive on that stage and receive a little gold man with huge significance. What the very best Oscars ceremonies do is celebrate that — celebrate the sacrifice and creativity and talent that brought these people to this moment in time. They put us in the shoes of the artists whose breathless, emotional acceptance speeches inspire us to dream of telling our own stories. Not necessarily so that we can win an Oscar ourselves someday, but because of what the Oscars are meant to recognize: the power that stories have in our lives.

It’s hard to feel inspired after a slog like tonight’s, though. One of the official themes of this year’s Oscars was “Movie lovers unite!” Unfortunately, now that it’s over, movie lovers may be united in one thought: Please let next year be better.

The 94th annual Academy Awards were handed out on Sunday, March 27th, 2022. Here’s where to watch all of this year’s winners and nominees.