Following the tragic death of drummer Taylor Hawkins, Foo Fighters canceled all of their scheduled 2022 tour dates. One of those dates was a headlining gig at the upcoming Welcome to Rockville festival in Daytona Beach, Florida. Today (April 6th), organizers announced that Nine Inch Nails will replace Foo Fighters on the Sunday (May 22nd) lineup of the four-day fest.

It’s the second such announcement of the day, as Boston Calling revealed this morning that NIN would be filling in for Foo Fighters on the first night (May 27th) of its three-day lineup.

The addition of Nine Inch Nails creates a triumvirate of early ’90s alt-rock legends at the top of Welcome to Rockville’s Sunday bill, with The Smashing Pumpkins and Jane’s Addiction playing right before NIN.

The rest of Welcome to Rockville’s lineup is stacked, as well, with KISS, Korn, and Guns N’ Roses headlining the other three days. Beyond the headliners, such rock heavyweights as Megadeth, Breaking Benjamin, Shinedown, Halestorm, Papa Roach, Baroness, Black Label Society, The Pretty Reckless, and dozens more acts fill out the four-day fest.

Nine Inch Nails Announce 2022 US Tour, Including Show with Ministry and Nitzer Ebb

The Welcome to Rockville gig is the latest addition to the 2022 tour schedule for Nine Inch Nails, who will be on the road for the first time since 2018. Heavy Consequence caught the band’s two-night stand at Brooklyn’s Kings Theatre in October of that year, and Trent Reznor and company delivered truly memorable sets during both shows. 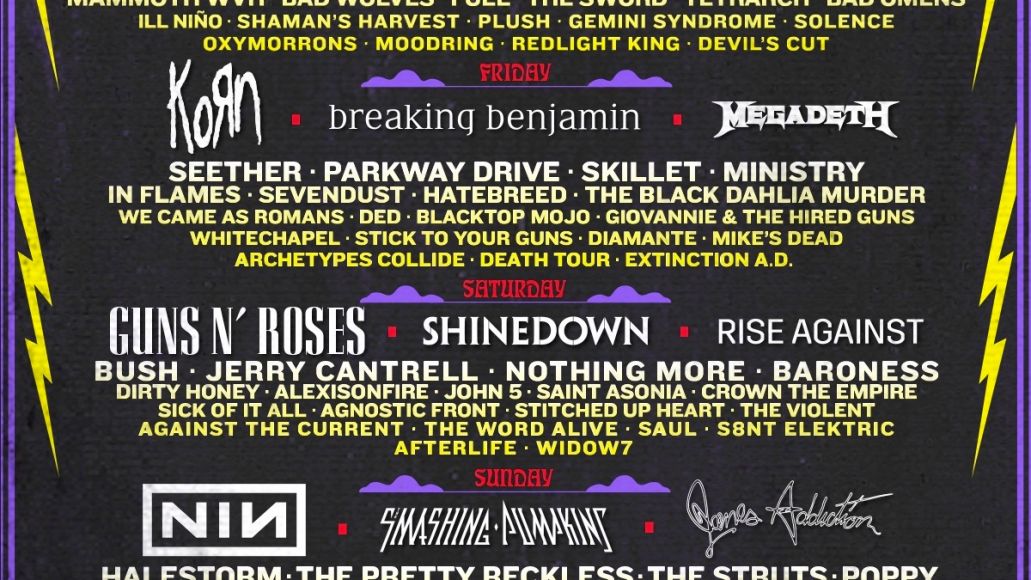