Alison Brie‘s resume is packed with notable roles, from her breakout performance as Trudy Campbell, Pete Campbell’s spirited and long-suffering wife on Mad Men, her charming six-season run on Community as plucky and eager Annie Edison, and voice work in BoJack Horseman and The LEGO Movie. But as she tells Consequence, perhaps the most seismic project of her career was in GLOW, the Netflix comedy which fictionalized the creation of the Gorgeous Ladies of Wrestling promotion from the 1980s.

In the series, created by Liz Flahive and Carly Mensch, Brie played Ruth Wilder, one of the operation’s founding wrestlers and creative influences, in a series that met with its share of behind-the-scenes controversies with regard to its treatment of people of color, but was unabashedly feminist in its storytelling.

The new Apple TV+ series Roar reunites Brie with Flahive and Mensch, as she leads one episode of the anthology series they created based on Cecelia Ahern’s book. In “The Woman Who Solved Her Own Murder,” Brie stars in the titular role, a dead woman who’s still able to interact (Patrick Swayze-in-Ghost style) with the real world while the circumstances of her own death are under investigation.

In the below one-on-one interview with Consequence, transcribed and edited for clarity, Brie explains what she enjoyed about the process of figuring out how to interact with the real world as a dead person, while also revealing how working with Flahive and Mensch has had a real impact on her career since the beginnings of GLOW — and well into the future.

What was your favorite aspect of playing a ghost?

My favorite aspect of playing a ghost was, I guess, the experimentation that was involved. It was a little bit of a scary job in that way where I wasn’t totally sure what they wanted from my performance or tonally, where the line was all the time and that kind of experimentation doesn’t always happen in TV.

A lot of the time, material is very straightforward, and in television, you don’t always have a lot of time to experiment and play around and explore things through trial and error. Not that we had tons of time to make this show, but [creators] Liz Flahive and Carly Mensch are so collaborative.

That was a really fun part of playing this character, was figuring it out together with Liz and Carly and with Anya Adams, who directed the episode, and all of us sort of huddling up and being like, “How is she gonna make her voice heard and how loud should you be?” And really getting to use my whole body to try to express myself was really fun.

In general, what does it mean to you to do something that’s pretty boldly feminist in its intentions?

[Laughs] I love it. Oh, I really dig it. One of the great joys of working with Liz Flahive and Carly Mensch, who I got to work with on GLOW, is getting to be really steeped in feminism at all times, and looking at things through that lens to a degree that I hadn’t before, or maybe don’t all the time. And it’s really fun. I think that it’s been really empowering, the experience of working with them, and I so admire their commitment to telling stories like this and to making them insanely entertaining.

These stories are, as you say, very, very boldly feminist, and yet they are, they’re incredibly fun. They’re funny. There’s a lot of magical realism at play. There’s all different genres. There’s horror. I think that they’re just so good at finding ways to suck an audience in and then hit them over the head with that feminist punch right there at the end. [Laughs] But it certainly is constantly broadening my own perspective on my experiences as a woman. And I hope that that people take that away from this show. 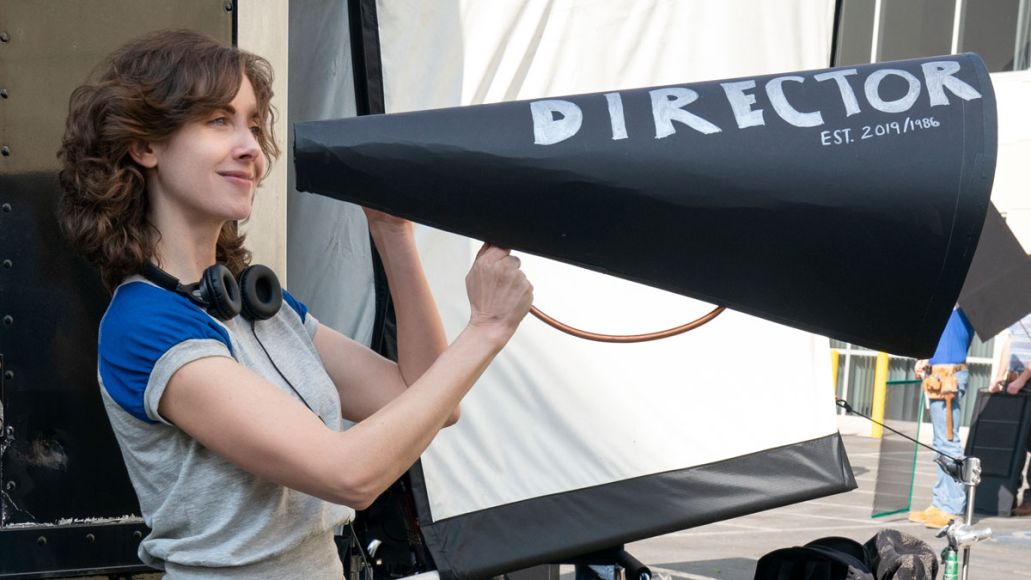 Alison Brie, behind the scenes on the set of GLOW (Ali Goldstein/Netflix)

Have you actively found yourself making different choices than you might have made before GLOW?

Yes, I do think it’s affected the way, in terms of work, in terms of the way that I choose material to work on. And as I’ve been writing my own material, the way that I build a crew and surround myself with more women on the other side of the camera — it just emboldened me as a person. The experience of shooting GLOW was really empowering and inspiring, to watch so many women working in so many different creative capacities.

And I got to direct an episode of GLOW, and since working on GLOW, I’ve written and produced three films. So it expanded the way that I work in ways that I hadn’t even thought about, you know — that I hadn’t fully considered before.

Roar Star Alison Brie on How GLOW Changed Her Career: "It Just Emboldened Me as a Person"