The Pitch: In his 2019 Netflix film 6 Underground, Michael Bay stages an opening car chase where his heroes smash through the streets of Italy, goring bad guys and yelling nonsense at each other. “I’m conducting surgery!” one character screams while, essentially, just tending to a wound. But maybe that moment stuck in Bay’s head.

Maybe he regretted not making that set-piece more surgical, to the point where he built an entire movie called Ambulance around the premise: What if you were performing life-saving surgery during a car chase?

Technically, Bay did not come up with this premise. Ambulance is a remake of a 2005 Dutch film, and Bay is not a credited screenwriter. But his penchant for breaking tension with over-explained jokes, or breaking jokes with melodramatic bombast, transcend any mere screenwriter, and the American version of Ambulance offers all of his favorite things: cars, trucks, explosions, exploding cars, exploding trucks, grim-faced guys carrying large weapons at a diagonal across their bodies, gore, sweaty overacting, and relentlessness.

Even in this nominal heist movie, he doesn’t want to stop and have Danny Sharp (Jake Gyllenhaal) stop and explain the plan to his adopted brother Will (Yahya Abdul-Mateen II). Will just shows up, hat in hand, hoping for a loan to get his wife a medical procedure not covered by their insurance; about 15 minutes later, he’s in Danny’s ragtag crew on his way to a $32 million bank robbery.

When the heist inevitably goes wrong, Danny and Will wind up hijacking an ambulance, with the authorities hot on their trail. A desperate crime saga and a vehicle that can’t slow down: Whether he meant to or not, Bay has made Speed Heat. 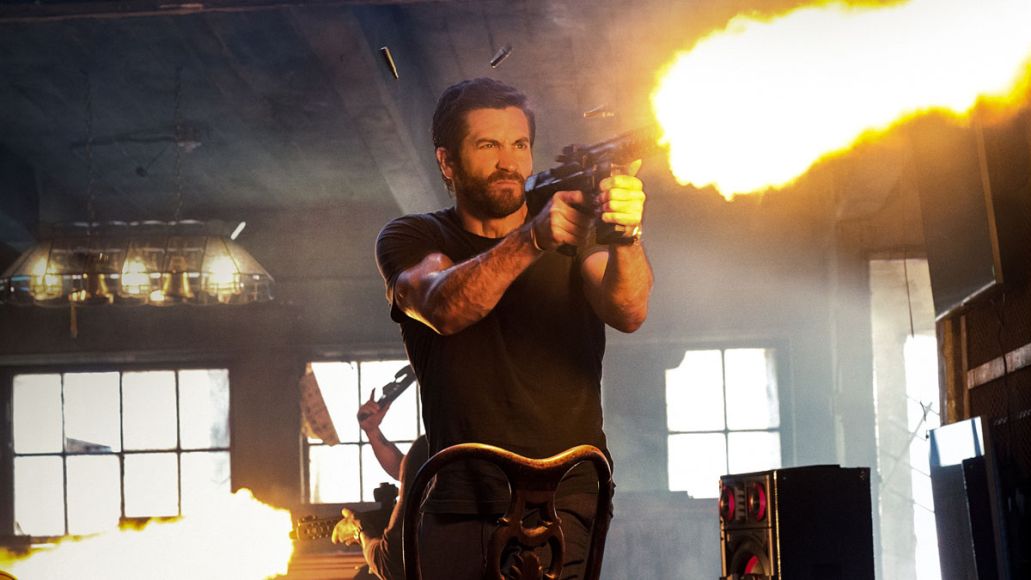 Eiza Saves the Day: Ambulance is not as good as Heat, or Speed, or any number of rip-offs of either movie. But Bay may be the perfect director for the dubious goal of combining Michael Mann operatics with Jan De Bont slickness. And he lucks into his most likable lead character in decades with Cam (Eiza González), the unlucky EMT who happens to be saving the life of a cop (Jackson White) shot during the robbery when her ambulance gets jacked.

Cam is introduced in parallel with the Sharp brothers, and if her arc — best EMT in the biz who purposefully avoids any personal attachment to her patients once her job is done, forced to get uncomfortably personal with bank robbers — is a little pat, she also represents a refreshing change of pace from the authoritarian machismo of Bay’s usual heroes.