Florence Welch is almost always moving when she performs. With the exception of the occasional sip of water or a dramatic pose at the end of each song, the bewitching British singer-songwriter is constantly on her feet, her body nimbly maximizing as much space on stage as humanly possible, all while singing with unshakable gusto. Many were lucky enough to both witness Welch’s captivating moves and hear her signature guttural mezzo-soprano alongside her backing band The Machine at the 2,000-capacity Los Angeles Theatre on Friday evening (April 29th), the first stop on her 2022 North American tour.

Of course, Welch’s flailing, skipping, twirling, and air punching served more than just a function of spectacle. Florence + the Machine’s upcoming record Dance Fever (out May 13th) drew inspiration from choreomania, a social phenomenon dating back to medieval Europe, where people danced erratically until they collapsed from exhaustion.

One theory suggests choreomania occurred to relieve stress from Black Plague-induced mass hysteria and social upheaval. Welch’s focus on resilience through movement not only resonates with current cultural anxieties around the pandemic, but also recognizes the unique catharsis dancing provides in getting us through our worst experiences. 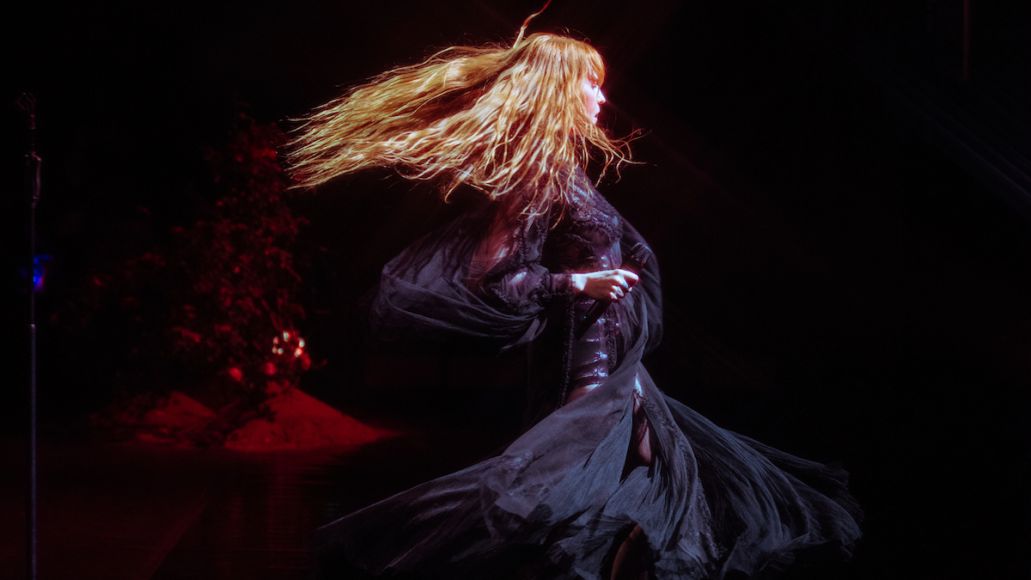 That recognition, however, would prove to be somewhat of a challenge in a live setting, as the venue’s narrow seating arrangements limited everyone’s ability to bust a move. Luckily, Welch didn’t need to do much to get people on their feet. When the lights dimmed, a feral roar from the crowd reverberated throughout the grand, palatial auditorium.

The bandmembers entered one by one before Welch herself emerged like the ghost of a 1970s rock ‘n’ roll goddess, gliding on stage in a puffy-sleeved, sheer black dress. As everyone stood and cheered, Welch launched into two Dance Fever tracks, the clamorous, dramatic “Heaven is Here” and the sultry, rousing “King,” the lyrics of which many concertgoers already knew.

From then on, the show maintained a snappy momentum thanks to Welch’s commanding stage presence. Welch helped lead the crowd in a stomp-clap rhythm during “What Kind of Man” from 2015’s How Big How Blue How Beautiful. Like an enchanting sorceress casting a spell, she passionately encouraged everyone to jump up and down while singing the exceptional Lungs deep cut “Kiss With A Fist.”