James Hong is the living definition of a screen legend, having appeared in literally hundreds of films, TV shows, and video games as an actor. Some of his most notable roles include appearances in Blade Runner, Big Trouble in Little China, The Golden Child, and the Kung Fu Panda series — he memorably fought Wayne Campbell over the hand of his daughter in Wayne’s World 2, and just this spring provided the voice of local elder Mr. Gao in Pixar’s Turning Red.

And then there’s Everything Everywhere All at Once, the genre-warping, mind-bending exercise in multiverse-hopping written and directed by Daniels. In the film, Hong, 93, plays Gong Gong, father to Evelyn (Michelle Yeoh) and grandfather to Joy (Stephanie Hsu) — traditional in his ways and a disapproving figure in Evelyn’s life, Gong Gong does warm up to his family by the end of the film, as they all ultimately grow closer through a strange confluence of events.

Hong, speaking one-on-one with Consequence, was more candid than stars usually are about the experience of working on a film. (Also, “Too much work — I’d rather sleep” was his response to the question “How are you today?”; a very relatable sentiment.) In the interview below, transcribed and lightly edited for clarity, he mentions his issues with Everything Everywhere’s length, while mourning some of the cuts that were made, including elements he’d improv’ed on set.

He also, to be clear, has many, many positive things to say about the experience of making the film in general and working with Yeoh in particular. He also shares some details about the project he hopes he might get to make in the future — something that, even after literally hundreds of other projects, would be something he’d never done before.

[Editor’s note: The following contains spoilers for Everything Everywhere All at Once.]

To start, I always notice that when actors get to sit down for long periods of time in a movie — like you get to do in this movie with the wheelchair. It must be a relief not to stand for a long time when they’re setting up shots and so forth.

You know, I didn’t really mind standing or sitting. That wheelchair was a horrible one, as you can see from the film. But it was nice to have people wheel me around, especially since we were at this so-called studio, which was actually a deserted federal building. There were long corridors to get from one set to another, so there was someone wheeling me around from one set to another. That was very good instead of having to walk three miles down the hallway. There are a lot of pluses.

How did you get involved with the film?

That’s going way back, because they kept postponing the shooting date. I think it was because they wanted some special actress to play some role. I kept waiting and I got really tired of waiting. Finally, they said they were going to go. Thank goodness they did, because it was just prior to the Covid pandemic. We got through with it on the last day just before they shut everything down. We started — I forgot the month, even, let’s say December 2019. It’s hard to remember.

I got into a little house they rented, it was a production office, and I read the role with them. In a way, when you look at the film, I’m a natural for the grandfather.

Did they just reach out and say, “Here’s a script. What do you think? Do you want to be in this?”

Basically, pretty much like what you said. “Here is the role, it speaks some Cantonese” — which I do, but very limited. When I got in trouble with my Cantonese, Michelle Yeoh would just say, “No, it’s this way.” She is brilliant with all languages — she is such a brilliant woman and actress.

That’s the way it was — it was very casual. The waiting period was not good.

Waiting for the movie to come out?

No, waiting for the movie [production] to start.

I feel like I heard it was 2018 when the script was first being sent around. What was your reaction to reading it for the first time?

I thought it was very berserk. I couldn’t quite understand it. To this day, I still can’t figure it out; it’s in the brain of those Daniels guys. They know what it’s all about, and the rest of us just did what they told us to do. With two directors, you can’t miss. It’s kind of nice to have two directors to watch over each other. That’s the way the film was, just teamwork all around. Amazing. One of the most fun times I’ve ever had.

I imagine you don’t get to do too many things as silly as this.

My goodness, you called it silly?

It is, yeah. Did you understand what it was about?

I think so. I also think there are some movies where you don’t always understand what’s happening at every second, but you can still just enjoy it.

I want your honest opinion — did you think it was too long, or just right; should it have been cut shorter?

I am always honest and say when I think a movie is too long, because I think it happens a lot. But in this movie, there was nothing I felt like I wanted to cut or didn’t want to see. What about you? What did you think?

I myself thought it was a little too long; there was a little too much of the wheelchair going back and forth through the multiverses. But if it kept your attention, that’s the way the audience will feel.

One hopes. Do you enjoy watching yourself on screen?

What kind of stuff did you do when you were filming that got cut?

For instance, when Michelle was approaching those guards from the government at the laundromat and she was going to tear them apart, and the grandfather knew she was up to no good, he yelled in Cantonese, “Don’t hit them! It’s trouble!” I thought that would be a good cut in the sense that the action and the tension would be building before she knocks those guys over. Little things that I ad-lib as a natural way for an actor. It just didn’t make it.

There were many other cuts that didn’t make it, like in the federal office with Jamie Lee Curtis — the camera was panning by, and the grandfather, out of his boredom, waved to the pretty clerk across the way. Lots of different things — during the big fight with Michelle, and the grandfather had turned to the evil side, I had a lot of ad-libs in reaction to her wanting to get into the other portion of the office into the other space. I would say 80 percent of what I did was cut. 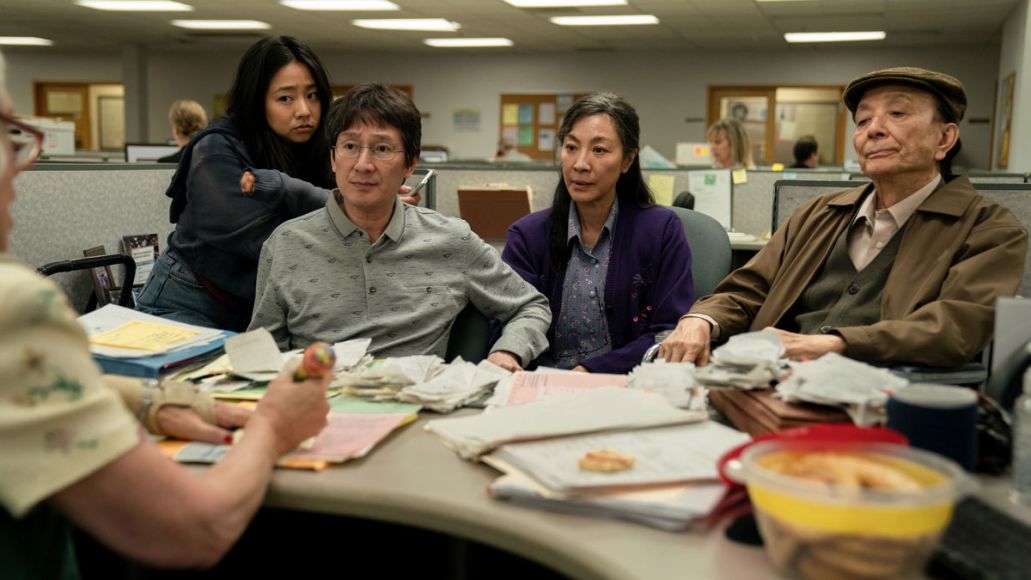 Were the directors encouraging you to ad-lib on set?

Yes. In the fight scene, where she [Michelle] approached me — yes, it was written, but she did a lot of crazy things. She did some things that I thought should not have been cut out. Dancing and everything — going crazy. I didn’t see that in the film, and I told her to stop it in Cantonese and English. That was trimmed down.

It’s tough, I’m sure, especially when there are so many other things happening in a movie.

True. Whatever the directors and editors think is essential. I don’t mind being cut out if it’s for the good of the film, of course.