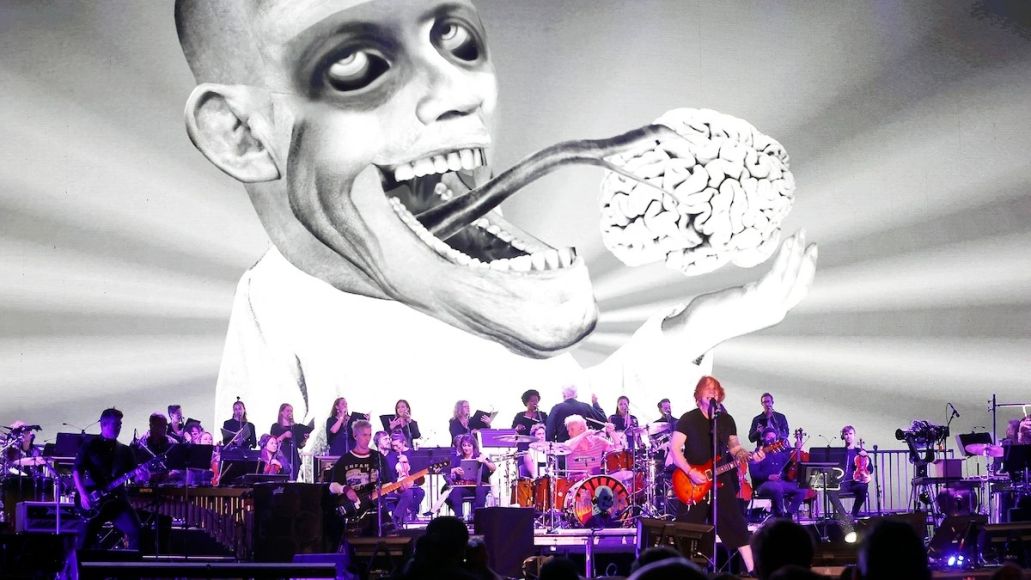 Across a two-year period, Elfman’s position on the Coachella lineup never changed, nor did his 40-plus member band (for the most part). “We had been rehearsing for a month, and we were really excited about it. It’s essentially the same exact band, minus Robin Finck from Nine Inch Nails and Wes Borland on guitar,” says Freese.

But as Coachella 2022 began to close in, Freese was left in a tricky situation — he had just joined The Offspring as their touring drummer, and they were scheduled to be playing shows in Australia throughout the month of April. “I was like, ‘Oh my God, after all this, I can’t do the show?'”

Coachella 2022: What You Didn’t See On The Livestream

The Australian government ended up forbidding international acts to play in the country after their COVID numbers rose in the early part of the year, and when Freese got the call that The Offspring gigs were off, he “couldn’t hang up the phone fast enough” to call Danny. “They were actually about three days away from auditioning drummers,” says Freese. “I called Danny’s manager, and told him, ‘Stop the auditions, I can do it!’ I was really excited about that.”

It all worked out, and Freese triumphantly joined Elfman and Co. for a powerful and fascinating set on Coachella’s Outdoor Theater on Saturday night (April 16th).

And though Freese has a great deal of pride in his complex work with Elfman over the last couple years, he was even more psyched about working with hyperpop duo 100 gecs. “Here’s a band I had never heard of… and of course, everyone half my age, including my children, they were like, ‘Oh, cool, 100 gecs!'”

Freese always tends to work with boundary-pushing artists, and 100 gecs certainly fits that category — fresh off the meteoric rise from their debut album 1000 gecs, the duo (Dylan Brady and Laura Les) enlisted Freese to drum on their highly-anticipated followup, 10000 gecs, which is expected to arrive this year. “One of the things I liked about them in the studio, some people were like, ‘Oh, I love that band!’ and others were like, ‘God, I hate them’ — I loved that reaction,” Freese says of the duo.

He was undoubtedly fascinated with their aesthetic, and jumped at the chance to work with them. “When I saw their first video for “Money Machine,” it looked like a Harmony Korine thing… they looked like two people out of Gummo in a Walmart parking lot. I was like, ‘What is happening here?’ Two people drank a case of Monster energy drinks and the last one spilled out on their laptop and fried it up. It sounded so crazy.”

Freese claims that the new record still sounds like 100 gecs, but it’s more “three-dimensional” — certainly the case if they’ve enlisted Freese for live drums. But rest assured, Freese guarantees that “by any means, they do NOT sound like a normal band.” He previewed the new record further, saying they “don’t sound like two people with a laptop anymore. Sometimes, when people stop making records with the four-tracks and go into the studio, they lose the edge and the craziness and the DIY punk-ness. They definitely did not; it just sounds better.”