The Mad Men and Chilling Adventures of Sabrina alum stars with Diane Kruger (Inglourious Basterds, National Treasure) in Swimming With Sharks, a six-episode limited series that was originally produced to debut on the dearly departed streaming service Quibi. After Quibi shut down literally as the series was finishing up production, it (along with other Quibi series) was rescued by the Roku Channel for distribution.

Based on the acclaimed 1994 indie film about a young assistant dealing with a tyrannical Hollywood boss, creator Kathleen Robertson flipped the genders of the leads to introduce the character of Lou Simms (Shipka), an aspiring producer with dangerous amounts of drive, who sets her sights on working for Joyce Holt (Kruger), a brutal production executive who’s put up with a career’s worth of cancellable behavior from others. The two women form an intense bond that goes beyond boss and employee, even as that bond drags them to some dark places…

Robertson’s scripts push further than most Hollywood tell-alls into some seedy material, and some of the most disturbing moments may not be that exaggerated from real-life events. Speaking two-on-one with Consequence, transcribed and edited for clarity, Shipka and Kruger explain how they got to know each other while making the series, their feelings about the Quibi experiment, how authentic this series might really be, and if they see any chance of a sequel here.

Diane Kruger: With each other or for the project?

Had you known each other, before doing this show?

Shipka: No, we hadn’t met. Our first real week of working together was that Malibu episode. And that was a really fun way to get to connect and jump off the deep end, if you will, together.

Kruger: You know, doing drugs together is just always a nice…

Shipka: It really does the thing! Honestly, would recommend doing a substance with someone that you would like to be more familiar with. And it does feel like you’re like on drugs when you’re shooting those scenes…

Kruger: A little bit, cause you’re like doing all the…

Shipka: Going through the motions. Yeah.

Just putting yourself in that space get gets you there to some degree?

Kruger: It’s true, you start to believe your own hype, I guess. 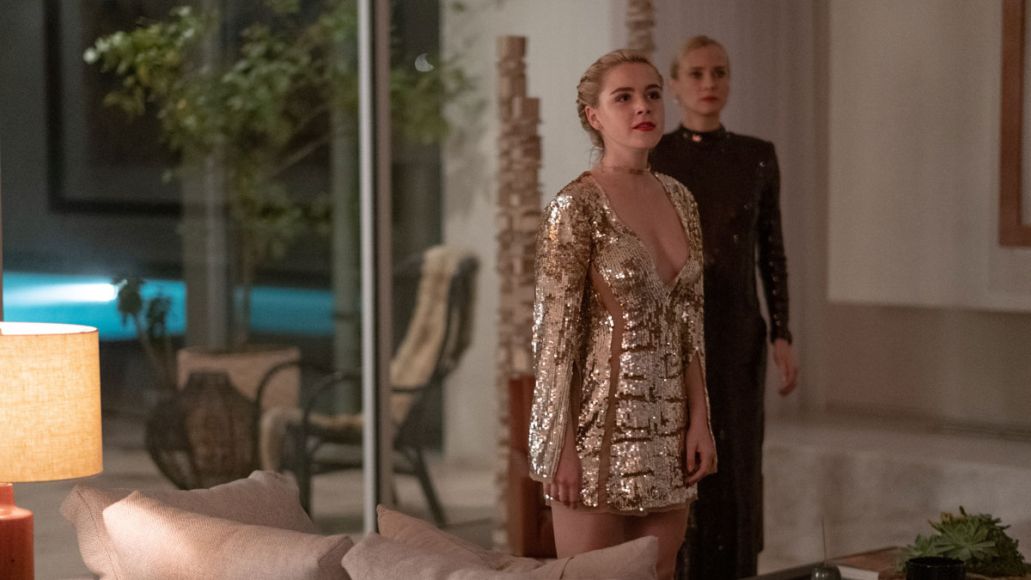 Swimming With Sharks (The Roku Channel)

So it sounds like this was shot pretty out of order?

Was that at all hard to track? Or, thanks to making movies, were you pretty well set?

Shipka: I think the timeline also is pretty compact, besides the time jump. Coming from TV, too, not everything is shot exactly chronologically in television either. So part of the job is knowing where you are in the world in the story. That’s always sad, when you watch a scene and you’re like, oh no, I forgot my place.

This project was originally a Quibi project — prior to Quibi shutting down, what was your feeling about Quibi? Were you excited to see what this show would look like in that format? Or was that anything you were thinking about?

Kruger: No, because it hadn’t even launched when we started filming.

Shipka: Right, I think Quibi launched like a week after we stopped filming the first round, because of the pandemic. I was excited for a new format. I think everyone was.

Kruger: Everybody wanted it to work.

Shipka: Everyone wanted it to work and it seemed like something that could be really exciting and, you know, unfortunately things didn’t work out in that regard, but I think new creative ideas and ways to stream and watch things is, you know, it’s always changing. We didn’t have all the streaming platforms that we do now five years ago. So yeah. New ideas and new concepts seem like something that everyone should be accepting with open arms, whether or not they work or not. You know, only one way to find out.

The version of Hollywood that we see in this is in some ways an exaggerated version, but a lot of it is also drawn from just real stuff that happened at one point. When you were reading the scripts, how much did you think you were seeing reality reflected back at you, and how much of it felt like fiction?

Kruger: That’s hard to pinpoint because a lot of it felt real. A lot of the characters, especially Joyce’s character, are based on experiences that Kathleen and her husband [executive producer Chris Cowles] on this, have had working in studios. She came up as an actress in the nineties, where I think bad behavior was more common and accepted in a certain way.

Just for myself, since I started out 15 years ago, I’ve certainly observed my fair share of bad behavior, you know? But [the show] is heightened because I think in 2022 and after #MeToo, obviously, things are changing and have changed, and they needed to. So it is heightened, you know. It’s the worst case scenario of a Hollywood of today.

What about you, Kiernan? I know you started off much younger than a lot of people do — do you feel like you were sheltered at the beginning in some ways?

Shipka: Yeah. I mean, I don’t think that I was overly exposed to the grueling nature of this industry until later on, just because I was kind of on a consistent solid gig for 10 years and I didn’t want to take anything in between. But then I’ve certainly seen sides of it, and felt parts of it that are brutal and not fun. I’ve had a great experience — I’ve had kind of the best possible scenario that you could dream up — and it still can be extremely damaging to one’s mental health and overall stability. Again, this is coming from someone that’s like had a really nice time.

So yeah, I think that it’s not an easy business and it never will be to some extent, but there are obviously things that can change. I don’t feel blind to it at all. I just feel like I made it out the other end alive. Everyone’s got injuries, but [Laughs] we’re fine.

To wrap up, the ending doesn’t have a completely firm lock on it, in terms of what happens to these characters. Do you feel like there’s potential here for a second season?

Kruger: I mean, we haven’t talked about it at all, and it was not intended to have a second season. So I don’t know.

Shipka: I think if Kathleen is inspired to do a second season… Like, I love this character. I love this world. I would absolutely go back and revisit it. I don’t know what the story is to tell. I don’t know what’s left. But if the people are wanting more and that gets people excited, I loved what we did and I loved working with everyone on this project. So I’d go back.

Swimming With Sharks is streaming now on the Roku Channel.