The Pitch: Stretched out over the sprawling plains and towering mountains of Wyoming, a kind of Hatfields and McCoys situation plays out between two neighboring ranch families — the Abbotts, led by firm but fair patriarch Royal (Josh Brolin), and the Tillersons, an out-there clan led by Wayne (Will Patton), an ailing land-grabber with his eyes on the Abbotts’ western pasture.

But things turn ever more complicated when a mysterious drifter named Autumn (Imogen Poots) shows up at the Abbotts’ doorstep and asks to camp on their land (and can pay for the privilege), her motivations unknown. That same day, a tractor-sized hole opens up in the ground along — you guessed it — the Abbotts’ western pasture, a bottomless black pit covered in smoke, seemingly leading to nowhere. Where did it come from? What does the hole mean? And what do any of our characters, including Royal himself, already know about it?

You Ever Heard of a Greek God Called Cronos? The neo-Western has made a bit of a resurgence in recent years, with the films of Taylor Sheridan (Hell or High Water, Wind River) and the Coens’ No Country for Old Men; tales of intrigue and devastation in a modern version of the Old West, where the often harmful tropes of the traditional Western are interrogated and reevaluated.

Outer Range, the latest in Prime Video’s slate of original series, seeks to do just that, with an added hint of the supernatural to give the West’s thematic concerns additional heft. In fact, its closest sibling, besides the frontier-family crime drama Ozark (which shares many cast and crew) is Sheridan’s own mega-popular Western series Yellowstone, itself about a charismatic family of characters doing everything they can to hold on to their homestead. 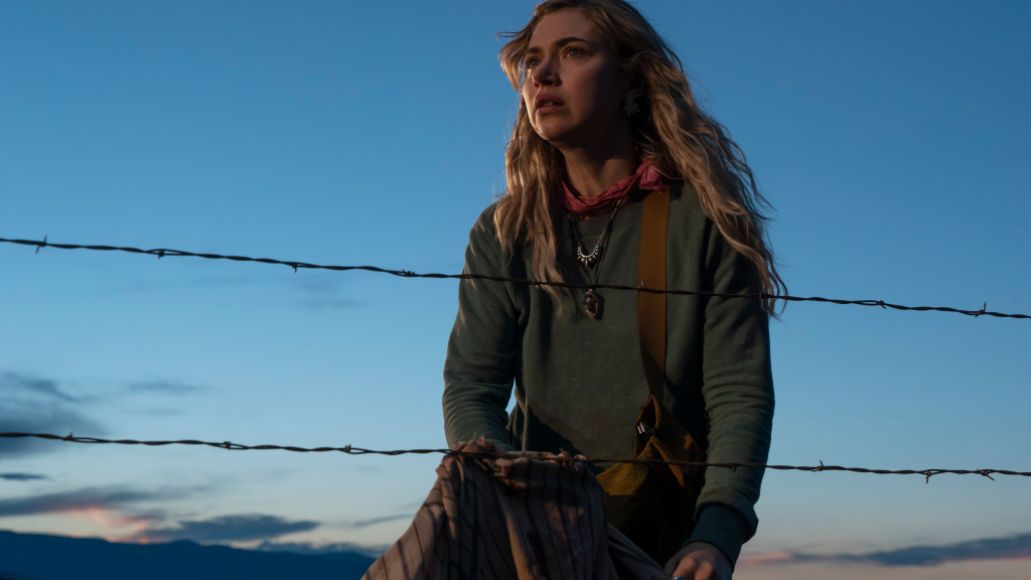 It all centers on Brolin, though, a man with a face seemingly molded to belong underneath a Stetson: his Royal Abbott, much like Kevin Costner’s Yellowstone lead John Dutton, is a tough, stoic, old-school cowboy who hides his true feelings (and some intriguing details from his past) beneath a stone wall of frustration.

But the hole on his land, a perplexing mystery that could serve both as savior and doom to his family and legacy, brings hidden facets of his personality bubbling to the surface. Like his No Country for Old Men protagonist Llewellyn Moss, he’s a man on the brink, trying desperately to hold onto his equilibrium and understand his place in the events that encircle his particular tribe.

The rest of the Abbotts have their own crosses to bear, and some are more compelling than others. Royal’s wife, the deeply religious Cecilia (Lili Taylor), is the glue that holds the family together, keeping calm in crisis through her faith (though that will be shaken by season’s end, Taylor’s steely persona cracking in entertaining ways).

Older brother Perry (Ozark‘s Tom Pelphrey) is a headstrong, temperamental single father, struggling to care for his young daughter Amy (Olive Abercrombie) after his wife mysteriously disappeared; younger Rhett (Lewis Pullman) is a rodeo hopeful whose bright future comes into jeopardy after a deadly run-in with one of the Tillerson boys midway through Episode 1. From the start, the overriding conflict isn’t solving the nature of their supernatural predicament: it’s how the Abbotts can hold onto their fragile ecosystem against threats both natural and supernatural.

Speaking of the Tillersons, the Abbotts’ archenemies are a lively bunch, the recipient of some of creator/writer Brian Watkins’ more ostentatious and campy flourishes. Patton’s Wayne is a cackling, over-the-top sleazeball, all smirking witticisms and choked laughter behind the plastic tubes of an oxygen tank. He can smell the supernatural change in the air — “something’s coming,” he purrs to Cecilia over the phone early in the series — and lusts after that land with a zealot’s devotion.

While older brother Luke (Shaun Sipos) is comparatively level-headed, baby bro Billy (Schitt’s Creek‘s Noah Reid) steals many of Outer Range‘s scenes as the attention-hungry theater kid cowboy, prone to belting power ballads and boy-band hits with inappropriate brio. Along with the Tillerson’s matriarch, the fur-wearing diva Patricia (Dierdre O’Connell, serving up a delicious slice of country-fried ham), Outer Range leverages its more somber philosophical ruminations on time, family, and the consumptive nature of the West with no small amount of welcome silliness. 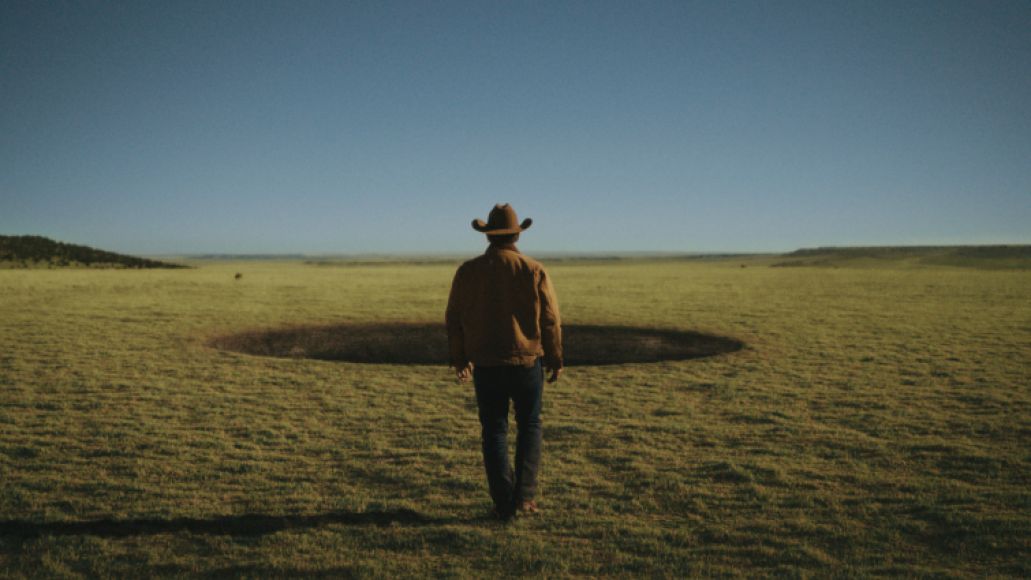 A Hole Lotta Mystery: At all turns, Watkins and his team seem committed to turning the values and virtues of the Western on their head, Outer Range delighting in both expanding our ideas of “the frontier” and sending up the old ways we used to conceptualize them. The hole itself, with its black liquid contained within the occasional amber nugget of stone, is a not-so-subtle metaphor for striking gold or oil, and the feverish fight for control of those resources that occupied the West.

But that search seems to swallow both families whole, both figuratively and (in some cases) literally; the hole provides both liberation and damnation, depending on who’s looking inside. It’s a dumping ground for dead bodies for some, an object to be worshipped for others. We get an early glimpse of what exactly the anomaly does, but Watkins seems content to leave its true nature, its existence, and a few chronological holes open for exploration in Seasons 2, 3, and beyond.

The show’s team of cinematographers, including Drew Daniels (It Comes at Night), Jay Keitel (She Dies Tomorrow), and Adam Newport-Berra (Euphoria), infuse the Wyoming setting with all the gorgeous, desolate expansiveness of the West, while Ozark composers Danny Bensi and Saunder Jurrians punctuate the usual Western sounds with unsettling vocalizations, tongue pops, finger snaps, and other eerie signposts that all is not as it seems.

Another welcome challenge to the tropes of the Western, albeit one that isn’t as neatly incorporated into the rest of the story, is its treatment of Native characters, specifically through the lens of local acting sheriff Joy (Tamara Podemski), a queer Native woman keeping the peace in the town while she officially runs for sheriff.

Even outside the very optics of such a character existing in a position of power and authority in a show like this, Podemski’s one of the show’s highlights, a no-nonsense lawkeeper doggedly committed to seeking justice while still open to the mysteries unfolding before her. Her tertiary role in the Abbott/Tillerson dynamic leaves her with less screentime to truly explore her character on the same level as everyone else, but also gives Joy a clarity of purpose that allows us to view their rivalry with greater clarity.

She’s tied to her community in ways that avoid fetishization or tokenization, and in some ways feels like the real protagonist of the series. Just give her more to do in Season 2!

The Verdict: What makes Outer Range sing, apart from its smart performances and tonally-flexible script, is its bone-deep emphasis on character above all else. Yes, the big hole in the ground presents many opportunities for theorizing and Lost-esque speculation of its many mysteries (fans of Netflix’s Dark will surely sharpen their knives to dig into the potential of the show’s chronology).

But the show is mostly about how the hole’s very presence affects the Abbotts and the Tillersons, and the way their animus ripples down through generations. Its ambitions are subtle but powerful, and I can’t wait to see how deep the rabbit hole goes in future seasons.