Pharrell Williams’ Something in the Water Festival has faced a lot of obstacles since its inception in 2019, from being postponed for two years due to COVID-19 to a “toxic energy” in Williams’ hometown of Virginia Beach prompting the artist to move the festival’s location altogether. Now, however, the event has relocated to Washington, DC, and shared its 2022 lineup, featuring Tyler, The Creator, Run the Jewels, Pusha T, and many more.

Equal parts music festival and community builder, Something in the Water emphasizes Black excellence and empowerment, which makes its Juneteenth weekend (June 17th through 19th) setting all the more meaningful. Williams was an outspoken proponent of making Juneteenth a national holiday, and, after the March 2021 police killing of his 25-year-old cousin Donovan Lynch in Virginia Beach spurred him to write a letter detailing his frustrations with the city, the event has added a heightened emphasis on social change.

Pharrell shared a statement about the festival, saying,

“SOMETHING IN THE WATER is a Black solution (LOVE) for a systemic issue, and this year we are taking our celebration to a higher platform — the nation’s Capital during Juneteenth Weekend. We want to show the world that there is SOMETHING IN THE WATER across the whole DMV and I want to continue to bring awareness to the greatness within these communities and invite large corporations to show up for the people. DC has always been a deep inspiration to me as a person and a musician. It is the land where Go- Go Music was birthed which has provided so much for our people. Our sponsors continue to go the extra mile to show that SOMETHING IN THE WATER is so much more than a festival. The goodwill we generate is a defining trait of who we are.  We will always have the hottest artists, but to pair that energy with these brands showing up for the community is what makes this festival a vehicle for change.”

Three-day passes for Something in the Water go on sale to the general public beginning Saturday, April 30th at 10 a.m. local time. Fans who purchased tickets to the festival in previous years will have access to pre-sale tickets from Wednesday, April 27th at 10:00 a.m. ET until Thursday, April 28th at 10:00 pm ET. The event is also offering “Virginia Locals Only” pre-sale on Friday, April 29th from 10:00 a.m. ET to 5:00 p.m. ET, where locals can purchase tickets in-person at the Virginia Beach box office of the Veterans United Home Loans Amphitheater with waived fees. When the time comes, grab your passes from the Something in the Water website. 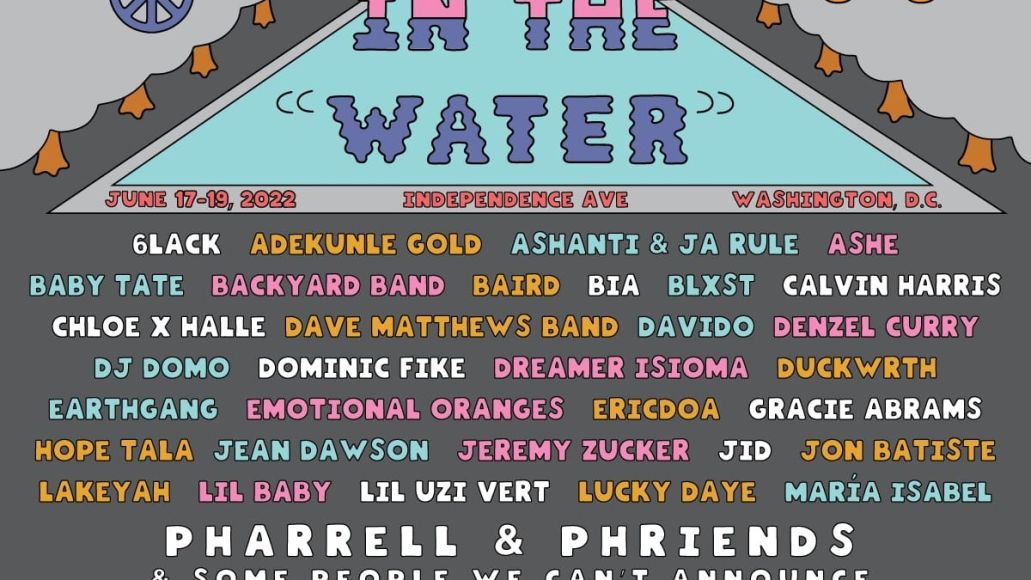 Pharrell Williams' Something in the Water 2022 Lineup: Tyler, The Creator, Run The Jewels, Pusha T & More