It has been said there is nothing quite like a Killers show in Las Vegas, and that statement will echo three times over to sold-out crowds April 15th, 16th and 17th as the city’s unofficial “house band” launches the “Imploding The Mirage Tour” at The Chelsea in The Cosmopolitan.

For Friday’s opening night, The Killers showed up with everything which has endeared them to their hometown crowd for more than two decades—a jumping, pumping, sing-along dance party for 3,200 brothers and sisters, neighbors and friends.

Having released two records since 2020, Imploding the Mirage and Pressure Machine, the April 15th show ushered in the official live debut for many tracks.

As the lights came up on The Chelsea’s stage Friday night, the screen held an image of “Dance of the Wind and Storm” by artist Thomas Blackshear, the cover art for Imploding the Mirage. To match the visual, the night began with the live debut of “My Own Soul’s Warning.” The first few bars met with a shower of confetti—usually such a thing is a closing moment—but this party was just beginning. Flowers then took the band into “Dying Breed,” also from Imploding. Stepping back in time to Sam’s Town and Day & Age with “Bling (Confession of a King)” and “Human” the crowd soon got a sense of the evening’s narrative, weaving through decades and albums on a symphonic magic carpet ride through the desert.

Introducing ITM’s “Blowback,” Flowers shared that femininity played a large role in shaping the song and the album. “One of the words that was floating around a lot when we were writing Imploding the Mirage was femininity,” he told the crowd. “I was blessed by the woman in my life because she showed me that femininity was not just about having soft skin. There’s a lot more to that and a lot of strength involved. Steinbeck once said ‘a loving woman was indestructible,’ and I say amen to that.” “Blowback” was preceded by the live debut of “Running Towards a Place” and, later on, of “Fire in Bone.” 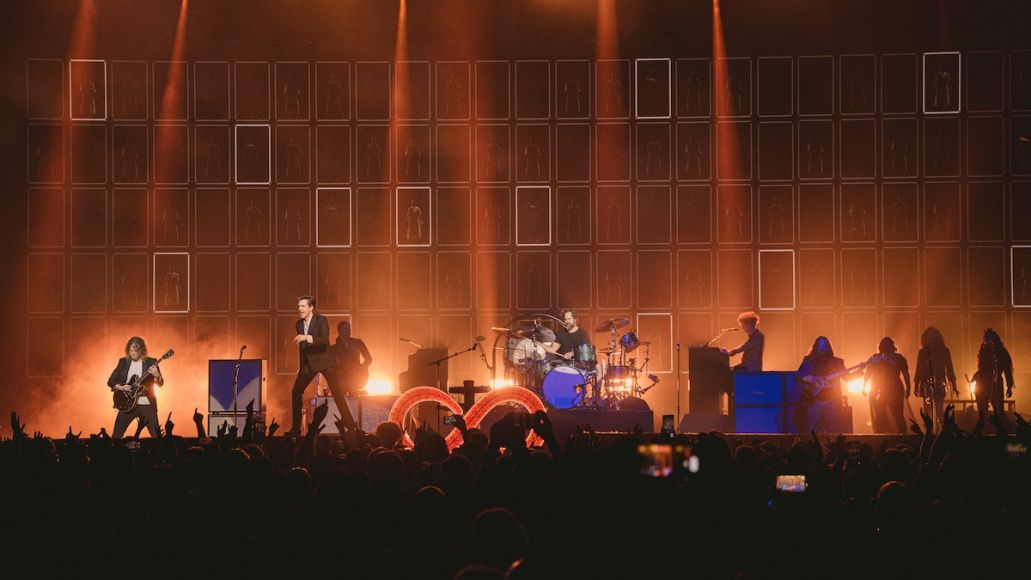 Taking a break from the new, “Mr. Brightside” and “Somebody Told Me” were firmly planted midset—complete with signature line: “We are The Killers, brought to you by way of Fabulous Las Vegas,” the statement which got the loudest cheers of the night.

The Killers Kick Off "Imploding the Mirage Tour" with Raucous Hometown Gig in Vegas: Recap + Photos