It’s a tale as old as Shakespeare (and, in fact, adapts more directly the Norse legend on which Hamlet was based): In 892 AD, a young Viking prince named Amleth sees his father, King Aurvandill (Ethan Hawke), return wounded from an expedition, only for his bastard brother Fjölnir (Dracula‘s Claes Bang) to strike him down and stage a violent coup. Their village running red with blood, Amleth escapes certain death only to see Fjölnir taking Queen Gudrún (Nicole Kidman) for himself; Amleth flees, revenge on his lips.

Years later, he’s grown into a mighty beast of a Viking (Alexander Skarsgård), mindlessly raping and raiding and pillaging while searching for his chance for revenge. And when a mysterious seer (Björk) prophesies the end of his journey (and its destination in Iceland), he stows away on a slave ship to finally slay his father’s killer — with the aid of Olga (Anya Taylor-Joy), a Slavic witch and fellow slave who’s drawn to his quest.

But when he finally arrives at Fjölnir’s new digs, posing as an anonymous slave, his thirst for blood grows ever more complicated by the presence of the supernatural and the amorality of his deed.

That’s All, Folklore: It could be argued that Robert Eggers is one of the architects of our modern horror lexicon: With his staggering debut The Witch (which also starred Taylor-Joy), and later The Lighthouse, Eggers molded a bleak, Expressionistic aesthetic that’s basically become the house style for A24’s horror output.

With The Northman, though, Eggers moves to Focus Features and makes (for him, at least), his most accessible movie yet: a blood-soaked action-horror picture that feels like The Green Knight meets Conan the Barbarian. 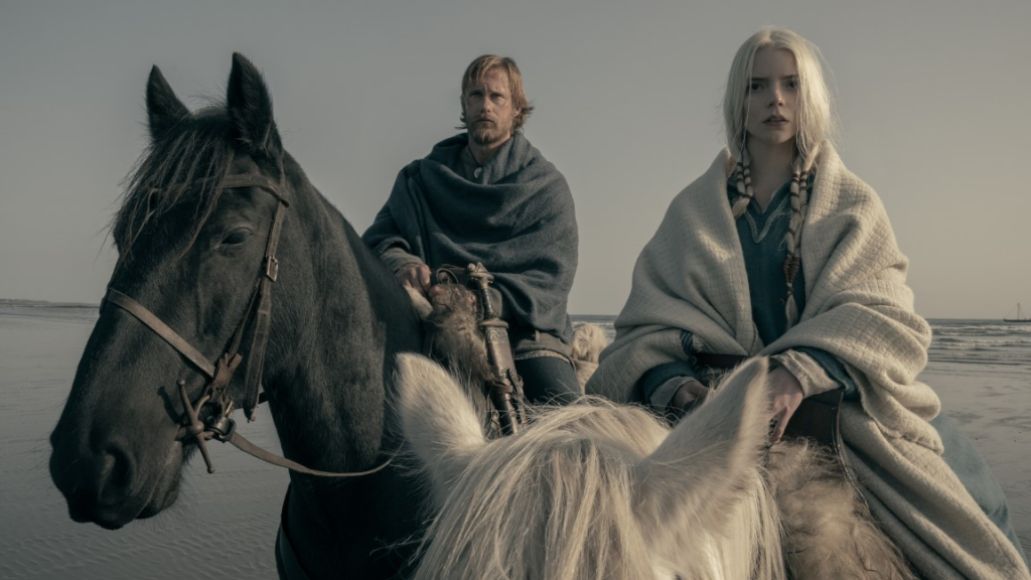 Like his previous two, Eggers’ latest is another immersive exercise in historical folklore, The Northman steeped in the thumping, chest-beating mores of Norse myth and manhood. The script, by Eggers and frequent Björk collaborator Sjón, is filled with high-minded, stylized dialogue that evokes Shakespearean scope while keeping the audience enticingly at arm’s length.

There’s talk of Valholl (Valhalla), the god Freyr, the myths of the Fenrir; all are stories that give our characters solace, ambition, hope in the face of darkness. Amleth himself is bound and shaped by the myth of the wolf, first taught to him by Aurvandill in strange, hallucinogenic rituals (with the aid of Willem Dafoe’s jester-turned-wizard), then reinforced by his Viking band of berserkers who howl at the moon and wear wolf pelts atop their heads. Amleth endures dreamlike staredowns with desiccated skulls, fights spiritual battles with demons for command of his fated sword (fittingly called the Death Blade), and sees visions of his lineage as fruit dangling from the branches of the Tree of Life.

The cast takes to this lyricism nicely, especially Skarsgård, who’s tried the shirtless, brutish action her thing before (hello, The Legend of Tarzan), but gets far more layers to play here. With hunched shoulders and every breath seething smoke, his Amleth lies somewhere between man and creature, constantly negotiating between the boy he once was and the monster he had to become to survive (and train for this moment).

Robert Eggers Crafts a Vicious Tale of Viking Revenge in The Northman: Review