In our Track by Track feature, artists open up about the stories and messages behind each song on their latest release. Today, The Regrettes bring us some Further Joy.

Sometimes when you’re overcome with anxiety, the only thing to do is dance it out. That’s essentially what The Regrettes have done on their latest album, Further Joy.

Out today via Warner, Further Joy finds the band channeling the tumultuous times we’ve all experienced these last few years as well as their personal flaws into their “poppiest and danciest” album ever. In fact, the album’s very title encapsulates the experience of locking yourself into a cycle of constantly trying to better yourself while facing the daunting realities of the world — and imitation realities of social media.

“That phrase, ‘further joy,’ summarized what it meant to be on the hamster wheel of constantly chasing happiness, but in turn, that’s what makes you unhappy,” lead singer and songwriter Lydia Night said in a press statement.. “I was stuck in a loop of wanting to be better, wanting to be good, and therefore I couldn’t be here. I couldn’t be present.”

With Further Joy, Night, guitarist Genessa Gariano, bassist Brooke Dickson, and drummer Drew Thomsen aim to break that cycle by confronting it honestly — and then dancing on its grave. Take a listen to the album below, followed by the band’s in depth Track by Track breakdown of the whole thing.

In support of the LP, The Regrettes are hitting the road this spring. With their itinerary launching next week at Coachella, you can find tickets to all their upcoming concerts here.

“Anxieties (Out of Time)”:
This was one I wrote at the beginning of the pandemic, and it encapsulates that impending doom, when it felt like everything in front of me was terrifying, it’s all coming at me, that’s all I could focus on. This was before I was even diagnosed with an anxiety disorder. I think a lot of people experienced similar feelings at the beginning of the world shutting down, nothing was off the table at that point in terms of what could happen in the world. The chorus is a reflection of that, we wanted it to sound like an anxious, panic attack pace like you’re running out of time and it feels like that to me. — Lydia Night

“Monday”:
Once you accept what’s going on with your mental health, sometimes it gets worse before it gets better, at least it did for me. Once I accepted I had anxiety and depression that was extremely scary because then it became real. I was off the rails, losing my mind, I felt so lonely and so lost and so isolated. I had just started to understand my own feelings and get validation for them. “Monday” comes from validation of those feelings, but again, there’s that counter, there’s that hopeful voice in there being like “You’re still alive. It’s fine. It’s OK. — L.N.

“Monday” talks about mental health in a way we haven’t talked about it as a band. Personally, I’ve been carrying the anxiety backpack around since I was a kid. I know from conversations I’ve had with friends, that they’ve related to that experience too. I’m excited for the world to have this song and people are able to listen to that little piece of emotion. — Genessa Gariano

We were playing around with leaving a lot of space, making it kind of slow, not trying to have a bunch happen with “Monday.” It was a fun challenge to let something be simple and big. There’s a lot of bass synth on that one too which was a lot of fun for me. Playing around and writing bass parts on a bass synth just naturally changed the way I wrote. — Brooke Dickson

“That’s What Makes Me Love You”:
It feels like a very realistic love song because I’m acknowledging a lot of flaws, or not even flaws, but realizing when I was in a dark anxious place that I was becoming very critical of my partner. I had a lot of relationship anxiety and I would look at any argument or tense conversation as a sign or scary thing, making it mean so much more than just a simple conversation. I got out of that place by realizing, “I love this person for exactly who they are and nothing needs to change about who they are or who I am to make each other happy.” I love that we butt heads sometimes. I love that we have these moments of learning more about each other, even if that means arguing. The song came from me flipping the narrative in my own brain to “That’s not why I should be scared. That’s why I love you.” — L.N.

I grew up listening to a lot of reggae, a lot of Bob Marley, Sublime, and No Doubt if that counts, with my older siblings. I struggle with not wanting to create baselines that are cliché. So at first, I was like, “Oh, I don’t want to do a cliché reggae bass line.” But then I realized it was fine because it was what the song was calling for. I let myself do it and I like the way it turned out. — B.D.

“Barely on My Mind”:
That’s about a really gnarly, abusive relationship I was in. It’s all about the haunting of that. When someone is told by someone, even if it’s just through their actions, that they deserve to feel like shit instead of having trust and honesty in a relationship, it can come up later in so many different ways and at so many different times. That song for me was processing that shitty relationship because it doesn’t go away, it doesn’t just disappear. — L.N.

“Barely on My Mind” has the kind of bite some of our past records had. There’s an anger behind it, there’s an attitude. Recording the guitar part was fun because it was after [Tim Pagnotta] told me to leave my brain at the door. So recording the guitar parts for this song I implemented that, and just sat down and I was really going ham with distortion. It came out very easily and naturally and quickly. I love the lyrics and I think there’s a cool message behind that. The person who it’s about will know it’s about them. — G.G.

[Our producer] added percussion, a very Michael Jackson, Quincy Jones-type sound, and that’s my favorite music ever. Hearing that put over a drum part I put down was living my ’80s R&B pop dream. Also, I love hearing Lyd sing so aggressively on the topic she’s singing about. You can hear that she means what’s she’s saying, it feels like a victory song — Drew Thomsen

I hadn’t played with palm muting before, this technique when you’re strumming that gives it a sort of tight, poppy, bouncy sound. I learned how to do that in the studio and used it for quite a few of the songs. For “Barely on My Mind,” I just did a simple baseline, which was a fun challenge for me, because I tend to want to throw everything in it. But for this, I was like, “We’re gonna keep it simple, we’re gonna palm mute, we’re gonna keep it poppy,” and I think it made for a song that feels very ’80s, very Pat Benetar, Blondie, Madonna. But, what everyone brought to the table modernized it, and made it fresh. The subject matter of that one, we’ve all had terrible experiences with abusive men. There’s no sweet way to put it. That one’s an angsty banger. — B.D.

“Subtleties (Never Giving Up on You)”:
“Subtleties” in particular feels super, pretty, and beautiful, but is one of the darkest songs of the album lyrically. I’ve struggled with eating disorders for a large portion of my life starting when I was 15, which eventually turned into body dysmorphia. Me singing, “Never giving up on you” is me singing to myself. Because it’s hard, it’s a hard thing to overcome. You have to eat every day, and there are mirrors everywhere, so there are a lot of things and habits that have to be done or undone. It can feel like there’s no end in sight for that. I’ve had so many days where I’ve felt like I would never have a healthy relationship with food, and I would never have a healthy relationship with my body. I’m currently in the process of going through eating disorder recovery, but at the time of writing this I was still restricting and I was still dealing with body dysmorphia. It’s terrifying and it’s hard, but I think it’s really important to talk about. — L.N.

[“Subtleties”] very blatantly talks about body dysmorphia, eating disorders, and those are things we can all relate to in different degrees, and that was super vulnerable to talk about. We couldn’t think of any songs we knew of that talked about those topics, and I think a lot of people will find comfort in hearing a song that does. — B.D. 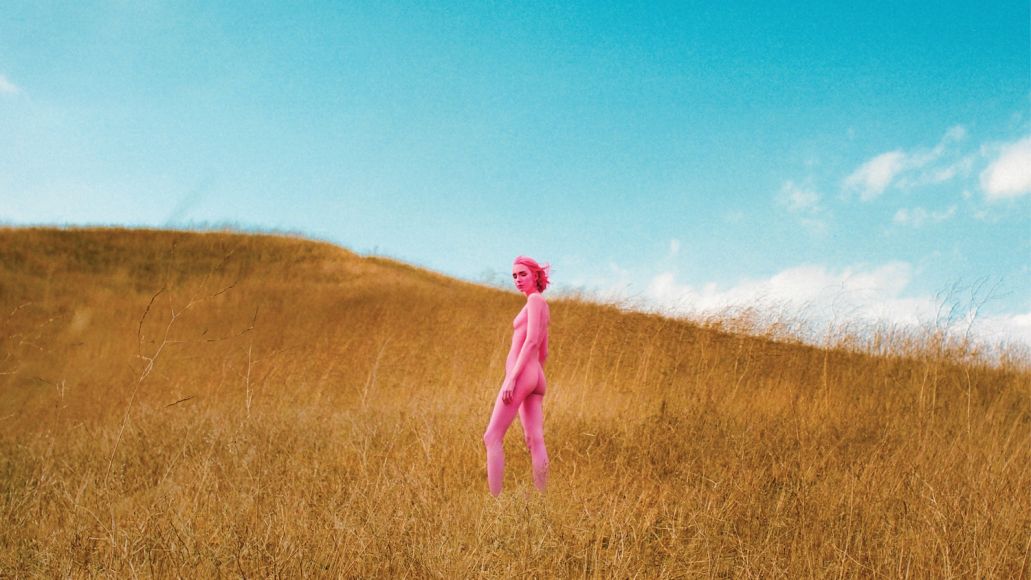 “La Di Da”
We wanted to write a fun song about feeling anxious, almost in a childlike way. Literally doing the action a kid would, putting your hands over your ears and saying “la la la” to block out everything. That’s a very real feeling and something I’ve gone through, those ups and downs when I’m anxious. I’ll have a high off whatever is going on and all of a sudden I’ll be in this hyper-up mode. It’s sort of comedic in those moments when you can feel on a cloud and then drop so quickly. — L.N.

I have a playlist of 2000s songs and when we were in Joshua Tree, we had a dance party with these colored lights with gels that we had turned on in the big living room of our Airbnb. And it may have been the Black Eyed Peas, some song that was telling us to put our hands up, and we were all like, “OK!” Then it was like “Why are we following this?” When you listen to “The Cha Cha Slide,” you don’t have to think, you have no choice but to dance because it’s telling you what to do, and that’s such a freeing feeling. — G.G.

It was a total departure from what I usually do when we write together. I was playing an organelle, this really cool synth with wooden buttons. We had sat down and tried to write something for hours and we were all distracted and nothing was happening. And then that first thing that comes in on the song, that little synth part I was playing, Lydia heard that, and loved it, so I kept playing and she started singing. It was super fun to make, and it was one of those songs that came out very quickly. — D.T.

“Homesick”:
I wrote it when my boyfriend went to go film a movie last October. It was the first time during lockdown I had been alone. I’d been going through this whole pandemic process with my boyfriend and I hate feeling codependent, but I felt so codependent when he left. I had gotten so used to, without even realizing it, having that person around and relying on that person. I started freaking out, but I wanted to write something that felt lighter and felt like a love song because I needed to feel that. I needed to feel like I was longing instead of freaking out. There are moments and lyrics that still give you a glimpse into that dark place I was in, like the one-line “fetishizing the thought of you lying.” I love that lyric, because I feel like that’s my anxiety to a T. — L.N.