The Pitch: It’s one of the most infamous murder cases in the 21st century: On December 9th, 2001, Kathleen Peterson (Toni Collette) was found dead at the foot of the staircase in her Durham, North Carolina home, having bled out from a suspiciously large number of head wounds. The only one home was her husband, novelist and mayoral candidate Michael Peterson (Colin Firth), who called 911 and explained through tears that she’d fallen down the stairs.

But the event’s strain on the Peterson family compounds as Kathleen’s death opens up fissures between the blended family, to say nothing of the suspicion Michael faces as his wife’s possible murderer. As the trial heats up, and more secrets come out about Michael’s hidden life, the family — and the French documentary crew filming him and the defense team — paradoxically get further and further away from the truth.

The Spirit of the Staircase: It’s easy to forget that this current glut of true-crime docuseries brought on by the rise of streaming really began with 2008’s The Staircase, a French docuseries from Jean-Xavier de Lestrade, which took a decidedly cinema verite view of Peterson’s murder trial (Netflix appended three new episodes and released it as a complete series in 2018).

It was compelling, and laid out a lot of the grammar these kinds of documentaries would adopt in later years: talking head interviews, archival footage, thrilling narrative editing that would ease viewers from one twist to the next. It would also showcase the flaws of this kind of true-crime documentary filmmaking: valorizing and flattering the figure at its center, muting the victim’s voice, and focusing on crafting an exciting story over flatly telling the facts. 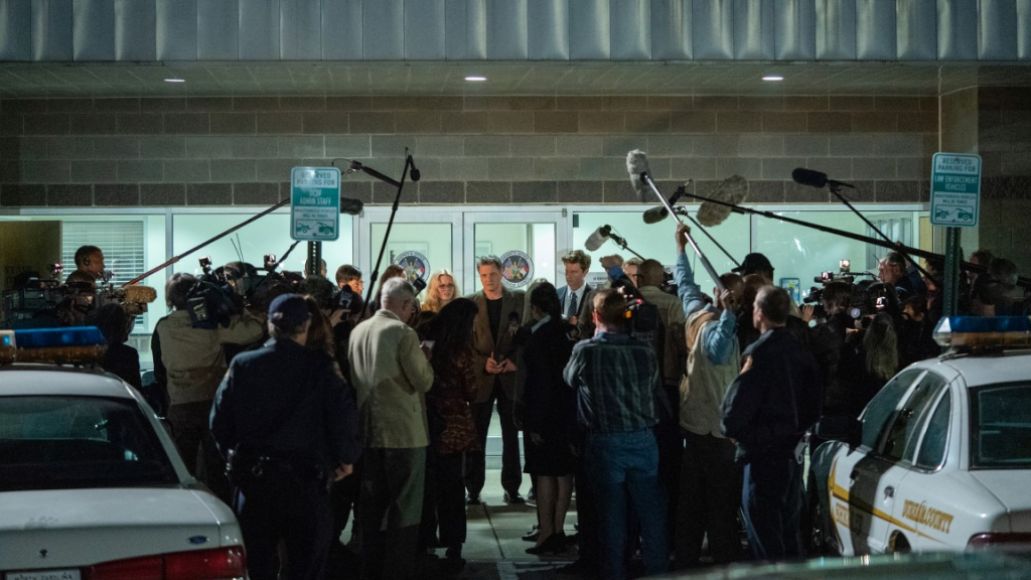 Now, HBO Max has seen fit to mine the other end of this kind of show-biz retelling of real-life murders: the prestige miniseries drama. And to its credit, The Staircase is fully aware of its own precarious position as an account of the Peterson case, spinning the specific circumstances of the case into a Shakespearean morality play about the intangibility of truth, the power of self-delusion and narrative, and the corrosive nature of secrets.

Those Who Live In Glass Houses: Unlike the docuseries, which focused mainly on Peterson and his defense, show creator Antonio Campos (The Devil All the Time, Christine) smartly expands the Peterson story into a multifaceted saga that touches on a lot of different characters and elements. There’s Michael, of course, played with scintillating opaqueness by Colin Firth; he’s a man always teetering on the edge of one manipulation or another, even to himself.

It’s revealed early on that Peterson is an adulterous bisexual man (and Kathleen’s discovery of this serves as a potential motive for her murder), which quickly dovetails into questions of his own sense of ethics, and the heteronormative social codes that keep queer men from being able to express who they truly are.

It’s… not great that Michael Peterson serves as a nifty example of the “bi men are deceitful nymphomaniacs because we have to sleep with both men and women” trope, as accurate as that may be in his case. But the show does its level best to reckon with that by highlighting the evident pain queer men often feel when they have to hide their feelings, a courtesy extended to more sympathetic figures like elder son Todd (Patrick Schwarzenegger) and, in one heavily loaded moment, Peterson trial lawyer David Rudoff (Michael Stuhlbarg).

The Staircase Takes a Winding Path Through the Infamous Michael Peterson Case: Review