The Pitch: It’s tempting to say Nicolas Cage is Having a Moment right now — after years of languishing in one direct-to-video thriller after another (films that, for what it’s worth, Cage claims he approaches with all the artistic integrity of his more celebrated stuff), one of Hollywood’s most iconic movie stars is experiencing a late-career renaissance doing exactly what he should be doing: leaning into the memetic nature of his own star persona.

For all his imitatable tics and twitches, he’s an astoundingly committed, charismatic actor, and he has a Zen-like understanding of himself and how others perceive him (for good or ill). But The Unbearable Weight of Massive Talent sees Cage playing to the cheap seats, throwing a bone at every Cage superfan who’s bought an embroidered pillow with his face on it or quoted lines from The Wicker Man back at him on the street.

In Tom Gormican’s meta-comedy, Cage plays a fictionalized version of himself who, like the real McCoy, is perhaps too committed to his craft for his own good. His signature intensity is starting to run thin, both with filmmakers — he bids unsuccessfully to star in David Gordon Green’s next picture — and his ex-wife Olivia (Sharon Horgan) and daughter Addy (Lily Sheen), who’ve long been alienated by his workaholism and artistic pretensions. 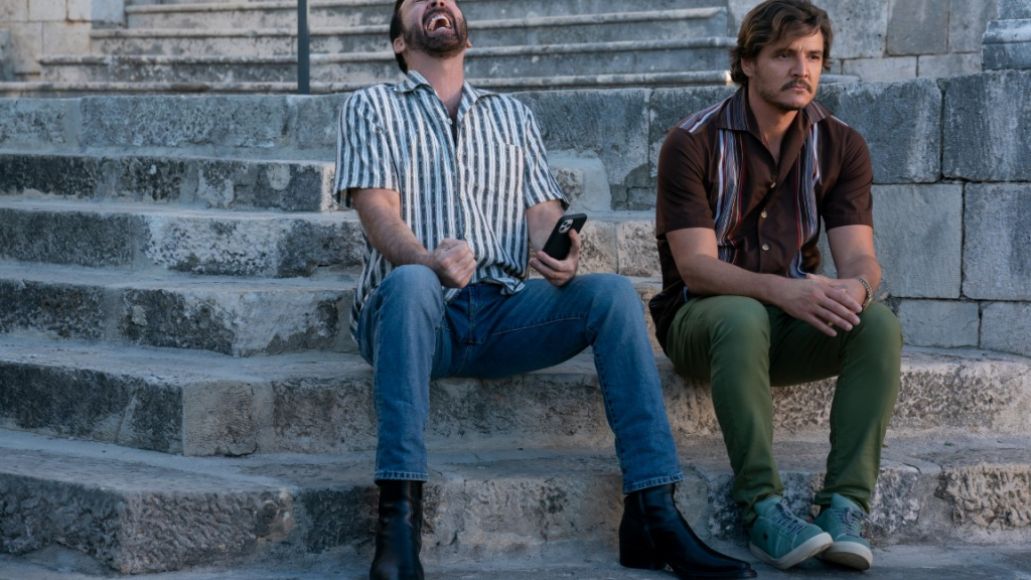 But just as he’s ready to throw in the towel and quit acting, his agent (Neil Patrick Harris) offers a lifeline: a million bucks to entertain a rich Spanish businessman and Cage superfan named Javi (Pedro Pascal) in Mallorca for his birthday. And when he gets there, he gets more than he bargained for — shootouts, acid trips, a kidnapping plot, and the bromance of a lifetime.

Wild at Heart: The challenge writer/director Gormican (alongside co-writer Kevin Etten) faces in Massive Talent is this: which side of Cage do you emphasize? The out-there action star? The nuanced actor? The glazed-over Zen Master who describes his acting style as “nouveau shamanic”? Like his filmography, Cage contains multitudes, and Gormican tries ably to reconcile the yin and yang of such an unconventional pop culture figure. But he’s like the dog with two bones: in trying to have it all, a good deal of Massive Talent feels thinner than it should.

To his credit, Cage is wonderful here as always, proving once and for all that everything he does, thinks, and is on-screen is a deliberate, considered artistic choice. He has a blast poking fun at himself, the kind of man who just won’t stop talking at you about The Cabinet of Dr. Caligari but who’ll also wing a spy mission because spycraft is “just like acting.”

The Unbearable Weight of Massive Talent Skims Through the Tao of Nicolas Cage: Review