What other show would devote a five-minute sequence to establishing its villain’s shower and nap routine? What other show would make it so captivating? That’s the special magic of Better Call Saul, which delivered a mid-season finale on Monday that redefined the concept of changing the game.

For a good long portion of its runtime, so much of “Plan and Execution” fits with Better Call Saul as we’ve always known it. Central to the episode is the ultimate culmination of Jimmy and Kim’s plan to force a settlement of the Sandpiper lawsuit by ruining Howard Hamlin’s (Patrick Fabian) reputation — a combination of actual justice and petty revenge, motivations which both Jimmy (Bob Odenkirk) and Kim (Rhea Seehorn) would probably struggle to articulate.

There have been plenty of clues as to what they were planning over the last six episodes, so while the end result — a drugged Howard losing it during an important mediation hearing and accusing the judge in charge of taking bribes from Jimmy — isn’t a huge surprise, it is deeply satisfying to see it come to fruition.

The sequence has its elements of tension, as the team scrambles to bring together all the necessary elements of the reshoot, but writer/director Thomas Schnauz includes plenty of touches to keep things light and fun. We’re reintroduced to Jimmy’s hired actor Lenny (John Ennis) as he rehearses lines of a Roy Cohn speech from Angels in America while wrangling grocery carts at his day job. The character known only as Make-Up Girl (Hayley Holmes) gets to work while in full hair, makeup, and wardrobe for “a live-action musical tribute to The Dark Crystal.” Dear Irene (Jean Effron), the official Sandpiper plaintiff, offers Clifford Main (Ed Begley Jr.) her secrets to her potato leek soup. 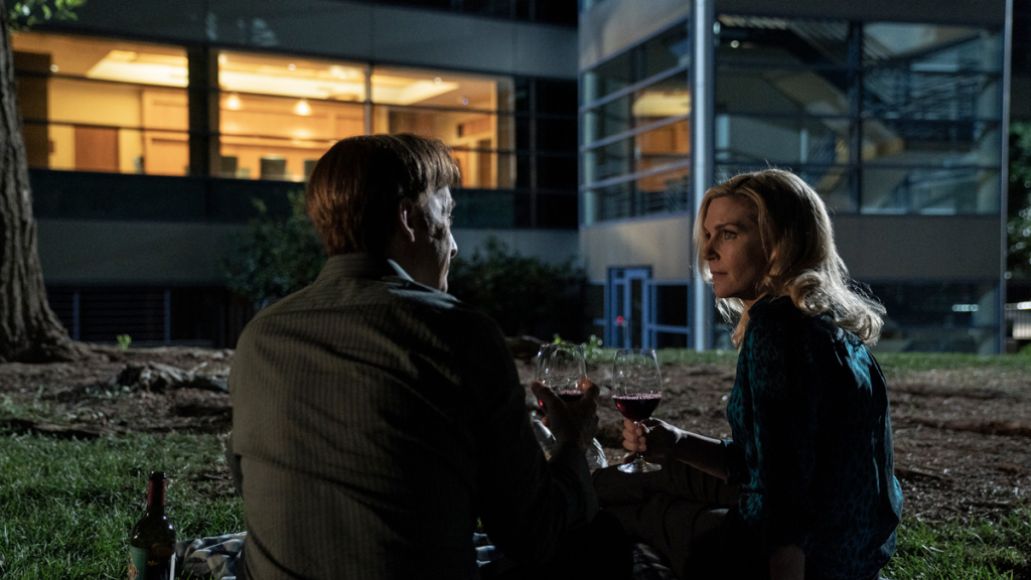 It’s diabolical, but still a satisfying con full of quirks, so engaging that it might be easy to forget that lurking in the shadows is Lalo Salamanca (Tony Dalton), the planet’s most patient killer, waiting for the right time to strike.

Some series have as many as four or more plot lines running at once, but while no stranger to narrative complexity, Better Call Saul has always had a pretty clean dual focus, witnessed as a split between the characters ostensibly on the “right” side of the law (Kim, Howard, Chuck back in the day) and, well, the other side (Mike, Gus, Nacho, and of course the cartel).

With each season, Jimmy has slipped back and forth between these two sides more and more frequently, though it’s only in Season 6, with him ultimately embracing his new designation as “a friend of the Cartel,” that he’s starting to get genuinely comfortable with the idea of being, in the words of Jesse Pinkman, “a criminal lawyer”.

With that definition comes the official blurring of lines between worlds. We did receive a prelude to this earlier in the season, when Mike stepped out of the shadows to talk to Kim for the very first time; again, two characters who have always belonged to the two different sides of this show. But that was a haunting blip in comparison to the final scene.