The Pitch: An odd couple are stuck together on a mission where, along the way, they’re forced to work through their mutual disdain/broken trust/fractured relationship on the road to becoming best friends. Sound familiar? If the set-up is a cinematic trope, it’s certainly not one you’d expect from a duo like Chip n’ Dale. Yet that’s precisely where viewers find the iconic animated chipmunks in Chip n’ Dale: Rescue Rangers, the new live-action-meets-animated reboot premiering May 20th on Disney+.

Where Did the ‘90s Go? The movie brings in the big guns when it comes to voice talent, with John Mulaney bringing a world-weary logic to the always-more-reasonable Chip and Andy Samberg imbuing Dale with a fame-hungry drive if not the dopey naivete of his original animated personality. And everyone from Eric Bana and J.K. Simmons to Keegan-Michael Key and Will Arnett appear in supporting roles, though you might be hard-pressed to recognize their voices as they stretch their acting chops in new directions.

(Meanwhile, Seth Rogen will always be Seth Rogen, even in animated form.)

In the universe created by the film, ‘90s cartoon characters are the old guard of animation, relegated to has-been status as they cling desperately to the fame of their 2D heyday. It’s a place where Beauty and the Beast’s Lumiere burns away the hours at fan conventions, Flounder’s gone from Ariel’s sidekick to being caught up in krill payments and Dale has resorted to getting the controversial “CGI surgery” in a bid for 21st century relevance…now in 3D!

Chip, meanwhile, has eschewed the limelight completely in favor of a practical job selling insurance, countless employee of the month plaques, and, apparently, a taste for screamo. How did they get here, exactly? Well, it’s a classic E! True Hollywood Story that Dale’s more than happy to narrate. And that’s when perhaps the biggest bombshell gets dropped of the entire film: Chip and Dale…aren’t…brothers?

According to the movie’s version of events, long before moving to Hollywood to turn their buddy act into stardom, the two chipmunks met in elementary school when the latter was just the lonely, friendless new kid in school. From there, they find success on Disney Afternoon, though their ascent is dashed after Dale reaches a bit too high and wants to venture out from under Chip’s shadow with an ill-fated solo project called Double-O Dale. 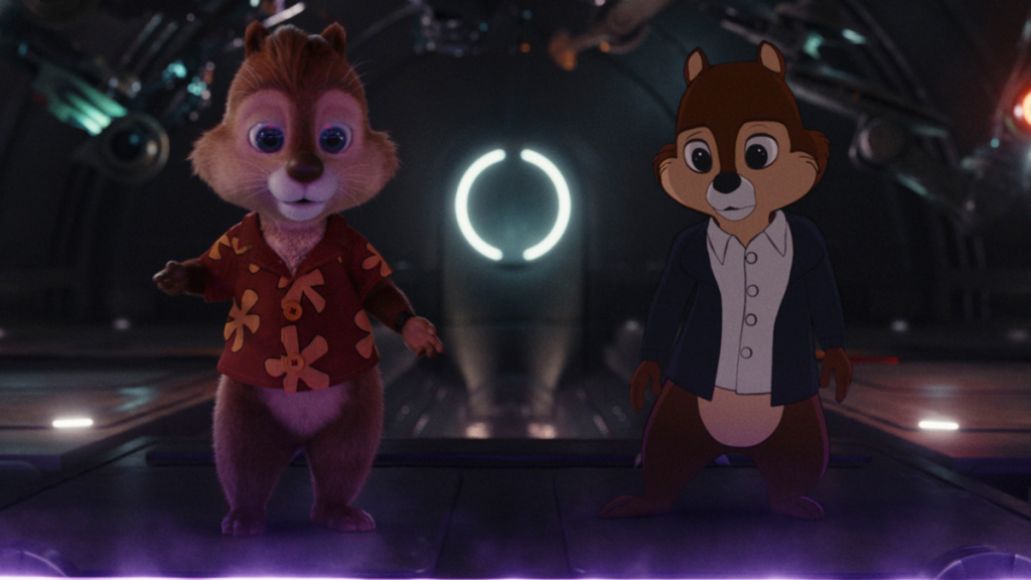 Hard-Boiled Chipmunks: Stylistically, Rescue Rangers obviously owes a debt to 1988’s Who Framed Roger Rabbit, what with its world in which ‘toons and humans coexist in harmony. And it’s one the creators nod to early in the story, with Roger Rabbit himself making an appearance at the wrap party for the Rescue Rangers show-within-the-show — coming full circle from Chip and Dale’s planned cameo thirty-four years ago that was cut from the final version of Who Framed…

And the similarities don’t stop there. The neo-noir aesthetic of the pioneering Oscar winner is also baked into Rescue Rangers’ plot. Though rather than Roger Rabbit, it’s Chip and Dale’s pal Monterey Jack who brings them together. A washed-up actor with a stifling addiction to cheese (the stinkier the better!), the years haven’t exactly been kind to good old Monty.

See, Monty’s in over his head with his illicit cheese dealer, and he’s heard rumblings of a conspiracy targeting your favorite childhood cartoons: Someone in the Hollywood underworld is running a terrifying bootleg operation — kidnapping beloved but forgotten characters, editing them against their will to get past copyright laws and shipping them off for a lifetime of making off-brand B-movies like Beauty and the Cursed Dog Man and The Small Fish Lady.