This essay is part of Consequence‘s Marvel Pop Culture Week, examining all the ways in which the MCU invokes our world’s pop culture and creates its own. Today, we look at two of the MCU’s most infamous name drops.

So the entire concept for Marvel Pop Culture Week began with a question: Why would a MCU superhero make a Batman reference? The specific scene in question occurs during 2021’s Eternals, when Karun (Harish Patel), loyal assistant to Kumail Nanjiani’s Kingo, introduces himself as a valet, and the centuries-old Gilgamesh (Don Lee) says, “Oh, valet. Like Alfred in Batman.”

Gilgamesh’s Batman reference above isn’t the only moment of DC Comics crossover in Eternals — later in the film, a young boy compares Ikaris (Richard Madden) to Superman, having seen Ikaris on TV using his Superman-esque laser eyes powers. Says the kid, “Dad, that’s Superman! With the cape and shooting laser beams out of your eyes!” and Ikaris corrects him: “I don’t wear a cape.”

These are just two of the nearly 250 pop culture references made in MCU films which Consequence cataloged as part of our ongoing quest to understand the depth of the universe created by Marvel films and TV shows. And yes, those DC Comics jokes might feel a little strange for a Marvel film to make — as Polygon entertainment editor Susana Polo wrote last fall:

If Eternals is serious about this, we are to assume that in a world where Captain America has been a bonafide superhero for decades, and folks like Iron Man, Thor, and Spider-Man have been zipping around since roughly 2008 …

Polo’s ultimate response to the implications of this choice: “I don’t need this stress in my life, man.” Which is very understandable. But while these references are a bit head-scratching, one thing that came out of our analysis is discovering that they’re actually pretty plausible. 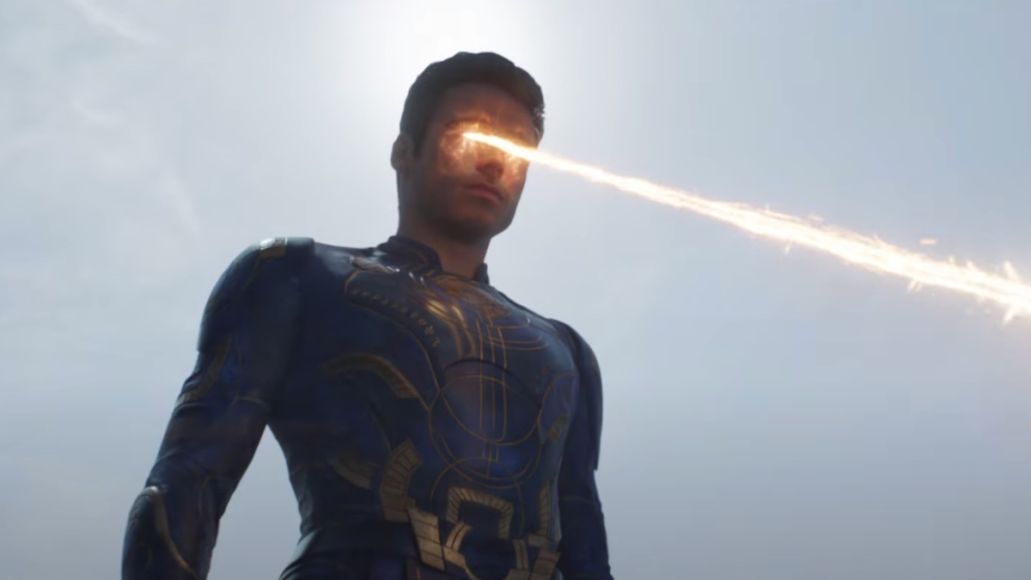 This isn’t like a character in an Avengers movie talking about having seen the film The Incredible Hulk, to be clear. Both of these DC Comics references treat the characters as fictional characters — and if you look at the timeline, this decision actually holds up pretty well.

Let’s say that in the primary timeline of the Marvel Cinematic Universe, the first canonical instance of a famous superhero was the official reveal of Captain America during World War II — after Steve Rogers was given the super-soldier serum in June 1943, he proceeded to tour with the USO for several months to fundraise for the war, becoming a national hero as a result.

It’s probably the earliest instance of a change from our reality to the MCU’s reality, at least on a globally-recognized scale, as there’s nothing explicit in the MCU (thus far) about the existence of fictional superheroes after the debut of Captain America.

But if the MCU’s timeline matches up with our own up to that point, then no matter what, it wouldn’t have had an effect on the existence of Batman and Superman — because both were created prior to 1943 (Superman in 1938, Batman in 1939). Not only that, but the character of Alfred? He was first introduced in Batman #16, published in April 1943, two months before Steve’s big “procedure.”

This is all deeply, deeply nerdy, of course, especially when you start to wonder this: Why would a world with real-life superheroes in it have any need to engage with fictional ones? It’s not something that Eternals bothers to explain, but it is a question that’s been explored before, in the seminal graphic novel Watchmen as well as other projects like Amazon’s The Boys: What does a society look like, if superheroes with extraordinary powers are an accepted part of it?

In the original graphic novel of Watchmen, Alan Moore posited that in a world where real superheroes are an accepted part of society, comic books would focus on a different genre of action-adventure: specifically, pirate stories. Damon Lindelof’s limited series continuation does showcase superhero tales on screen, but in the guise of the Ryan Murphy-esque docu-drama franchise American Hero Stories.

Within the MCU, there certainly doesn’t seem to an MCU equivalent — or, as mentioned, any other existing fictional superheroes. (WandaVision does reference the existence of a film called The Incredibles, though it’s just a title on a marquee, and also WandaVision has a very complicated relationship with reality — just ask Ralph Bohner.)

In short, it’s not hard to imagine that on Earth-616, Batman and Superman have the same level of cultural cache as other early 20th-century pop culture icons like Betty Boop or Nancy Drew; maybe not as popular/revisited as they are on our Earth, and maybe a bit of a deep cut for a kid to make. But dates-wise, anyway, it makes a certain amount of sense.

The MCU has made some mistakes over the years, but these Batman and Superman references are perhaps distracting to the point of breaking the fourth wall… but under scrutiny, they hold up. Now, to wonder how Nick Fury feels about the film Pulp Fiction…