This article is part of Consequence’s Marvel Pop Culture Week, examining all the ways in which the MCU invokes our world’s pop culture and creates its own. Here, we compiled a definitive playlist of every song used in a Marvel movie or TV show, so you don’t have to. (Spoiler alert: it’s not a short one.)

Some people might say that it’s absolutely bonkers to list every song in a Marvel movie or TV show. Would those people be right? Absolutely. Is that reason ever going to stop us over here at Consequence? Absolutely not. The below is an exhaustively researched, super-long playlist of (most) of the songs featured in the soundtrack of a Marvel film or TV show, compiled in an attempt to capture the unique way that music is used in the MCU.

In our research, we chose to focus on the MCU’s theatrically released films, plus its Disney+ series, as they are all tied together by a single megamind, Kevin Feige, and are thus certifiably canon.

How did we complete this wild task, you might ask? Two of Consequence’s bravest interns, Jonah Krueger and Rachael Crouch, led the way on compiling the list of songs, using a mix of IMDb and Tunefind to do so.

Abundant in the MCU are pop culture references galore, easter eggs, and hidden meanings. Given this, it stands to reason that a collection of fascinating things will pop up within its soundtracks, too. Iron Man 2’s classic rock motif taps into its themes of military industrialism, while Ant-Man’s perplexing mix of insect-based songs, children’s music, and The Cure underscores its protagonist’s wacky, idiosyncratic nature — there are endless new insights to be gleaned from this playlist.

Indeed, the sheer variety in this playlist is pretty astounding. And on one end, the implementation of easily identifiable, canonical artists (Bob Dylan, AC/DC, to name a few) in a franchise about the otherworldly is bound to provide it with a lot of connection to history and various social movements. On the other end, the use of less identifiable music — a piece of Bollywood score, “Swag Saha Nahi Jaye,” in Loki, for example, or French song “Sur Mon Ile De Reve” in Ant-Man and the Wasp — has the potential to connect the films to a culture or time period that might not have originally been on the viewer’s mind.

As you can see below, the genres included in this playlist are very wide-ranging, though with a clear emphasis on pop, hip-hop, and holiday music. (Holiday music being so popular is likely due to the influence of Hawkeye, which heavily emphasized seasonal classics in its soundtrack.) [Click to expand.] 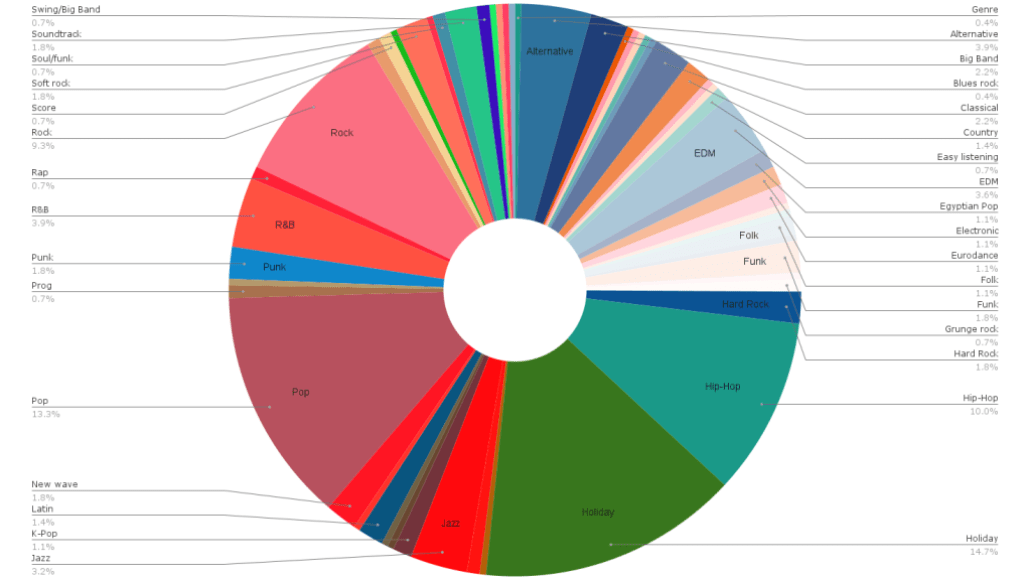 Also, if you’re curious about which decades were favored most heavily from project to project, the chart below captures them (click to expand): 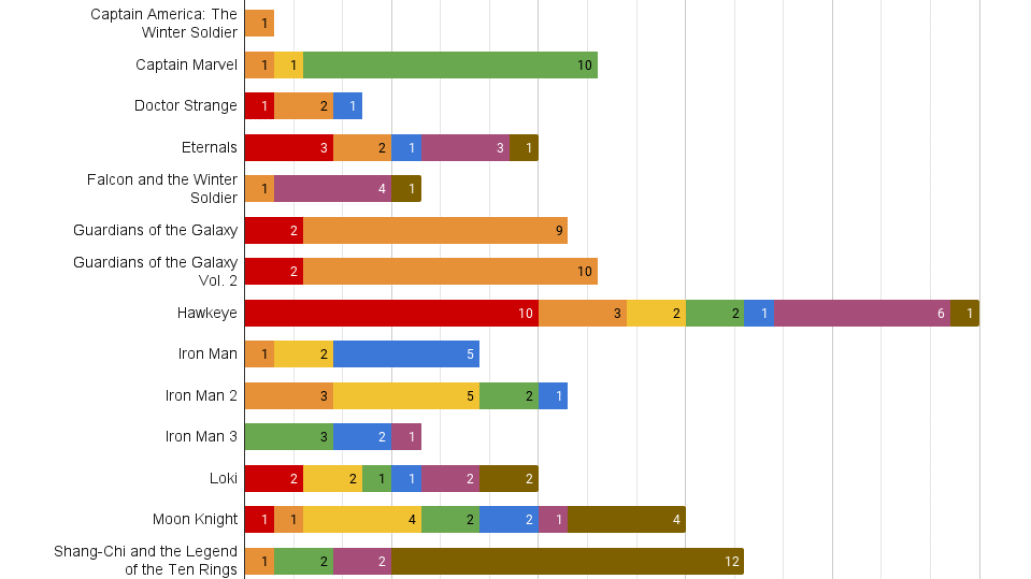 Sadly, given the scope of this list, there are some songs we couldn’t locate on Spotify. We’ve made a list of those songs, though, so if you wish to seek them out elsewhere for the full auditory MCU experience, (and we absolutely recommend that you do), you can find them at the end of this page.

Check out the full playlist below, or visit it in spreadsheet form via this link.

Every Song Featured in a Marvel Movie or TV Show Playlist:

Oh God, We've Made a Playlist of Every Song Featured in a Marvel Movie or TV Show