Setting the Stage: Limp Bizkit are back with their highly anticipated sixth studio album, Still Sucks, which the gang dropped Halloween 2021 via Suretone Records. Frontman Fred Durst and company released the new LP (marking the follow-up to 2011’s Gold Cobra) following many years of development hell. The new record’s first single, “Dad Vibes,” premiered at the end of the band’s well-received performance at Lollapalooza 2021, in which Durst also debuted his fresh middle-aged dad look.

Rounded out by guitarist Wes Borland, bassist Sam Rivers, turntablist DJ Lethal and drummer John Otto, the Grammy-nominated band announced its Spring 2022 U.S. “Still Sucks Tour” this past March (get tickets here). Limp Bizkit set out on a tour last summer, but ended up cancelling the majority of dates due to COVID-19 safety concerns. The Still Sucks Spring tour kicked off in the band’s home state of Florida, and included a stop in New York City at the legendary Madison Square Garden on Friday, May 13th. The ongoing run is scheduled to conclude in Ontario, Canada on May 31st, with tickets available here.

Taking the Stage: Prior to Limp Bizkit hitting the stage at around 9:15 p.m., fans gradually pouring into The Garden were treated to opening sets by Californian hardcore act Scowl, British electro-punk rockers Wargasm UK, and Florida-by-way-of-NYC rapper $not. All aforementioned acts played brief sets, but kept the crowd engaged leading up to Limp Bizkit’s headlining set. The evening also featured a special appearance by personality and content creator Jon Carnage (using an alias and claiming to be a marketing research representative for “Live Nation,” but humorously pronouncing “Live” as “liv”), who trolled the crowd in-between set changes with annoying questions about genres of music.

Limp Bizkit started their set with Fred Durst relaxing on a Lay-Z-Boy recliner and informing the crowd that he was feeling a little under the weather. “So I had the doctor come and interrupt the Rangers game,” said Fred, adding, “He says I don’t have COVID.” Durst’s negative COVID result invoked a thunderous roar from the crowd. Apparently, Durst’s allergies were acting up, and his doctor gave him the choice of moving the show to another day, or just outright cancelling the gig. Ultimately, it was Durst’s choice to play or not, and in the end (and with the blessing from the crowd) Durst decided to move on with the show even though he wasn’t feeling 100 percent.

“Turn it up Lethal, the show must go on!” exclaimed Durst as the band jumped into the first track of the night, “Dad Vibes,” and continued with additional Still Sucks tunes “Out of Style” and “Dirty Rotten Bizkit.” The vacuuming, cigarette-smoking mom from the Still Sucks album cover adorned the stage as a giant inflatable, situated stage right of Lethal’s monstrous DJ booth decked out in stage blinders. Rivers and Otto rocked out stage left on their own personal stage risers, meanwhile Borland (donning a similar look he premiered at Lollapalooza) was uncontainable far stage right of the immense Garden stage. Durst sported a modified “Dad Vibes,” wearing a blue jumpsuit with a long gray wig and a backwards gray cap, plus red aviator sunglasses.

Limp Bizkit followed up with a string of Chocolate Starfish and the Hot Dog Flavored Water favorites like “Rollin’ (Air Raid Vehicle),” “Hot Dog,” “My Way,” “My Generation” and “Livin’ It Up,” even inviting fans onstage to sing along. Jon Carnage interrupted Limp Bizkit’s set halfway through to play off his “I’m going to ask the audience annoying questions” shtick, only to have Durst interrupt him by literally ripping all his clothes off on stage, leaving poor Carnage solely in his orange banana hammock. In-between songs, Durst and company (and with help from a disco ball) would party like it was 1999 by paying tribute to tunes from the likes of Britney Spears, Backstreet Boys, DMX, and others.

Other highlights from Limp Bizkit’s set include a special “Killing in the Name” Rage Against the Machine cover featuring Malachi from Scowl, plus renditions of “Full Nelson” and “Take a Look Around” with Milkie Way and Sam Matlock of Wargasm UK lending assist.

Due to MSG’s hard curfew, Limp Bizkit had to cut a few songs from its set (topping out at 14 tunes instead of the usual 16-18 they’ve been playing on this tour). The evening concluded with the appropriate “Break Stuff,” which erupted a huge party onstage (as seen in the video below), with all the opening bands and their friends joining Durst, who cued his lighting guy to turn all the house lights on so the massive and chaotic MSG mosh pit was available for all to witness.

Limp Bizkit will continue their “Still Sucks” tour through the end of May. Get tickets here, and see our photos and fan-filmed video of the band’s Madison Square Garden set, as well as the setlist, below.

Photo Gallery – Limp Bizkit perform at Madison Square Garden on May 13th (click to enlarge and scroll through): 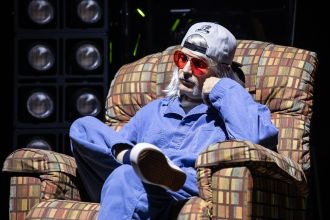 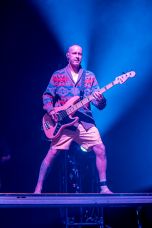 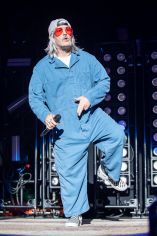 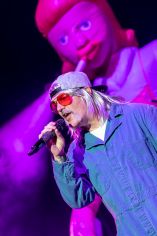 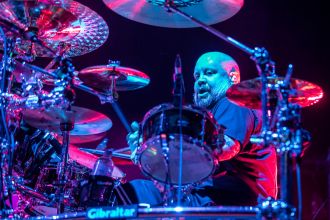 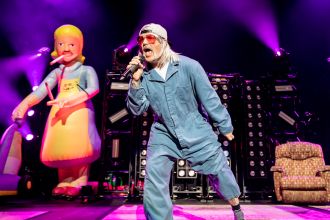 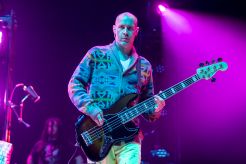 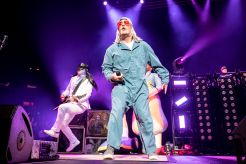 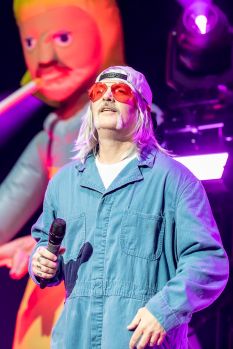 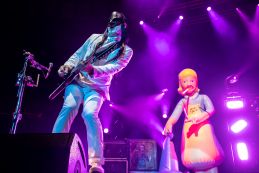 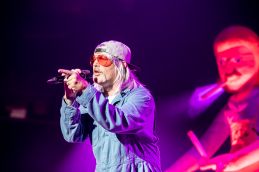