Tiny Fonts is a recurring feature in which our staff handpick the must-see smaller acts at all the major festivals.

Move over Glastonbury and Primavera Sound: Mad Cool Festival has entered the chat. In just a few years, Madrid’s Mad Cool has become one of the premiere European festivals, and 2022’s lineup is as stacked as ever. Sure, the headliners — which include Metallica, The Killers, Florence + The Machine, and 11 (!) other big names — are special, but no festival poster is complete without the excellent artists that make up the bottom few lines of each day.

Festivals are a place to bask in the glow of the biggest artists around, but they’re also a place of discovery. I can’t think of the amount of times I’ve wandered around a festival during the early hours of the day and stumbled upon pure greatness, and it’s in Mad Cool’s nature to foster an exciting and dynamic space for new artists. Plus, with Mad Cool starting its music programming each day around 6pm, attendees will have a one-of-a-kind experience with artists that they might not have gotten the chance to see at another festival.

Check out the full list of 14 artists undercard to see at Mad Cool this year below. Single-day tickets for Saturday and Sunday — priced at 75€ — are currently available via the festival’s website.

Few artists can achieve what Alfie Templeman has before their 20th birthday. The British singer, songwriter, and bandleader has evolved from lo-fi bedroom recordings to full-fledged indie rock anthems, as heard on his most recent album, Mellow Moon. His irresistible melodies are often dance-worthy and packed with energy, and he’s very quickly rising to become one of the most talked-about indie artists in England — and beyond.

UK artist Baby Queen creates confessional and upbeat synth pop, often with funky guitar lines and spoken word verses. She’s an incredibly versatile vocalist — she can go from Spice Girls-esque pop to Riot Grrrl grit, with one of those voices that provides an air of comfort and intrigue. Born and raised in South Africa, the 24-year-old Baby Queen is certainly one of the most exciting figures in pop right now, and her excellent debut 2021 The Yearbook shows just how much she’s capable of.

UK upstarts DAYTIME TV are bound for the biggest stages: their undeniable alternative rock style is truly stadium sized, echoing the big room indie of bands like Nothing But Thieves, Walk The Moon, and Sam Fender. Having just released their debut album last month, the vibrant Nothing’s On But Everyone’s Watching, DAYTIME TV are quickly ascending to be one of the UK’s most talked-about rock acts.

Chubby and the Gang

British rockers Chubby and the Gang have a classic, post-punk edge that immediately separates them from their contemporaries. Frontman “Chubby Charles” Manning-Walker possesses a gritty, anthemic voice, and treats every full-throated vocal moment like the stakes have never been higher. Fans of Parquet Courts, The Hives, and Turnstile will certainly enjoy Chubby and the Gang’s garage rock romps.

Los Invaders hail from Valencia, Spain, and are currently at work on their sophomore album. Their synth-covered style is tailor made for festivals, complete with chopping drum-beats, auxiliary percussion, crystalline guitars, and some shout-along moments of dance punk. Los Invaders bring such a strong influx of energy and heart that you can’t help but smile from ear to ear. If you’re attending Mad Cool this year, set aside Los Invaders’ set time for a dance off.

So far, Mad Cool is Angie McMahon’s only tour date of 2022 — which means her performance is certainly a must-see, but also that she’ll likely have new music in tow. The Australian singer-songwriter’s last album, Salt, came out back in 2019, which, in pandemic years, is like a lifetime. But make no mistake: Salt was a brilliant debut album from McMahon, and her trademark confessional indie rock and expressive voice are truly classic. If you’re a fan of Camp Cope, Sharon Van Etten, and Julia Jacklin, then Angie McMahon is right up your alley.

Bartees Strange’s world domination continues into 2022, with many festival appearances already in tow for the Washington D.C.-based artist. Now on prestigious indie label 4AD, Bartees Strange is gearing up to release his second album, Farm To Table, on June 17th, and it’s sure to be the most defining statement yet for the multi-genre songwriter. His music is a conglomeration of all his influences, from fuzzy post-punk to hip-hop, R&B, and everything in between — and at the center of it all is his powerful and dynamic voice leading the charge. Get on the Bartees Strange train now; he could very well be headlining this festival in a couple years.

Bikôkô’s flamenco-inflected R&B is designed to move you. Born in Barcelona and trained extensively in jazz and classical music, Bikôkô uses a more fragmented, experimental style and truly dazzles. Her carefully restrained vocals and wildly creative production and arrangement choices call Solange to mind, but Bikôkô is a truly singular artist, carving out lots of space to explore in a style that few others have the courage to attempt. Luckily, most of Mad Cool takes place under the moonlight: a fitting environment to witness the inimitable Bikôkô.

Madrid-based singer-songwriter Irenegarry certainly has some chops: each of her songs, which span from pop, to trip-hop, to infectious R&B, emphasizes her silky smooth voice, equally subtle as it is enchanting. If you’re a fan of Billie Eilish, Rosalía, or H.E.R., you’ll appreciate Irenegarry’s delicate, multi-genre balance. One of the many Madrid-based artists set for Mad Cool 2022, Irenegarry is the definition of homegrown talent.

Muro María hail from the idyllic Alicante on the Spanish coast, and it’s clear that the beach-y vibes from their hometown have influenced their dreamy garage rock through and through. They are first and foremost a guitar band, channeling ’90s grunge and shoegaze to create catchy and nostalgic indie jams. Fans of Snail Mail, Skegss, and illuminati hotties will vibe along to Muro María’s fuzzy guitars and dreamy vocals, and Mad Cool attendees are in for a true summer treat.

Spanish artist Goa has a voice filled with rasp and power — not unlike his grunge hero, Kurt Cobain. He has an affinity for blending a rock-focused, guitar-driven sound with the production principles of hip-hop and R&B, creating a hybrid style that feels both nostalgic and modern at the same time. As pop punk begins to make its way back to the top of the charts with a much more inclusive ethos behind it, Goa is absolutely one to watch.

Hope Tala’s remarkable blend of R&B and Bossa Nova is simply irresistible — and paired with the Spanish capital in the peak of summer, you have a match made in heaven. Her voice is soothing and carries an air of cool, making her songs luxurious pop gems in an otherwise saturated market. As she gears up to release her debut album, Hope Tala has partnered with super producer Greg Kurstin to help round out her sound, and the resulting jams have been better than ever: “Party Sickness” and “Tiptoeing” are instantly relatable, infectious tunes, and they’re outstanding previews for what’s to come.

England’s easy life are unapologetically down to earth: their songs feel intimate, personal, and extremely specific to their Leicester origins. Their most recent LP was last year’s Life’s a Beach, a wonderful carnival of characters and stories, filled with insights and shrugged-off aphorisms. Take a listen to the excellent “Skeletons,” perhaps the best track on Life’s a Beach: as frontman Murray Matravers laments his affinity for doomed relationships, the band is grooving as hard as they can amidst apreggiated synths and a driving drum line. It’s a blissful and gripping combination, and it shows that easy life are entirely in their own lane.

Norwegian rockers Spielbergs have just announced their sophomore LP, Vestli, due out August 19th. Their fuzzy, anthemic rock feels as lush and as massive as Norway’s natural environment, but above it all is an urgency that moves you out of your seat. There’s a big touch of emo throughout their new songs, crafting emotive and cathartic moments that feel right at home in a festival tent. If singles like “Brother of Mine” and “When They Come For Me” are any indication, Vestli is set to be a massive statement from the Oslo trio.

Editor’s Note: Consequence is the North American media partner of Mad Cool and will be on the ground during this year’s festival. 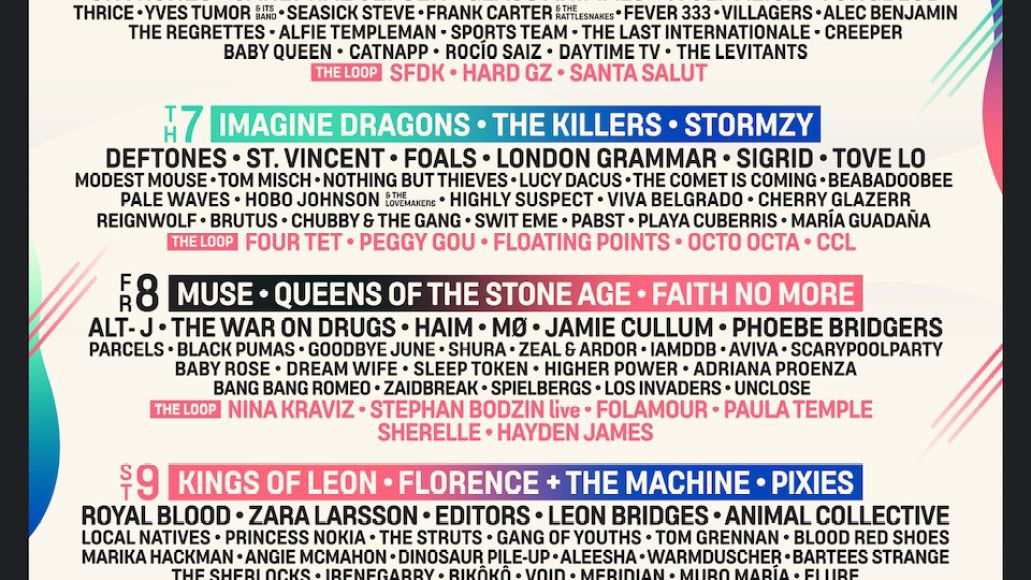