This review is part of Consequence’s Marvel Pop Culture Week, examining all the ways in which the MCU invokes our world’s pop culture and creates its own. In this article, we look at the most-often-mentioned real-life franchise mentioned in these films and shows…

An important thing to know about the Marvel Cinematic Universe is that the man responsible for orchestrating it is also a giant fanboy — not for Marvel Comics, though, but for Star Wars. This means that if you study the MCU in-depth, its ties to a galaxy far, far away are numerous.

To be clear, Marvel Studios President Kevin Feige has been openly acknowledging this for years, going back to 2015, midway through “Phase 2” of the franchise’s history. Then, Eric Eisenberg of Cinemablend was able to ask Feige about a trend that had emerged in Phase 2 films up to that point — all of them featured a character getting his hand cut off at one point, which proved reminiscent of the now-legendary climax of The Empire Strikes Back.

In that climax (you know, in case it’s been a little while), Luke Skywalker (Mark Hamill) not only gets slammed over the head with the reveal that the infamous Darth Vader (David Prowse, voice by James Earl Jones) is his real father, but Daddy Dearest also chops off his dang hand.

Hence, the inspiration for repeated tributes. As Feige told Cinemablend in 2015:

“I’m obsessed with Star Wars – and it didn’t start out as intentional, but it became intentional, including that beat that you referenced. It sort of happens in every Star Wars movie, but I was sort of looking at it, ‘Okay, is Phase Two our Empire Strikes Back?’ Not really, but tonally things are a little different. Somebody gets their arm cut off in every Phase Two movie. Every single one.”

How does that break down, you ask? Well…

Captain America: The Winter Soldier (2014): While it doesn’t happen on screen, when Bucky (Sebastian Stan) is revealed to have survived the WWII mission that left him presumed dead, it’s also revealed that he lost his arm as a part of the aftermath.

Guardians of the Galaxy (2014): Gamora (Zoe Saldana) cuts off both of Groot’s (Vin Diesel) arms.

Avengers: Age of Ultron (2015): Although he claims that it was an accident, Ultron (James Spader) does end up chopping off a good chunk of Ulysses Klaue’s (Andy Serkis) arm.

Ant-Man (2015): Scott Lane’s (Paul Rudd) final attack against Yellowjacket (Corey Stoll) begins with Yellowjacket’s arm becoming subatomic before the rest of him — an unconventional kind of amputation, but technically one nonetheless.

What’s amusing, however, is that while this homage was initially tied to Phase 2, it’s continued on in additional projects: From Wong using a portal to sever the Cull Obsidian’s hand in Avengers: Infinity War to President Loki getting his hand bitten off by Alligator Loki in Loki, it’s become a go-to maneuver for the franchise. It even happens in Marvel projects that weren’t overseen by Feige as a producer, such as Agents of S.H.I.E.L.D. (Yo-Yo Rodriguez, played by Natalia Córdova-Buckley) and Luke Cage (Misty Knight, played by Simone Missick).

Does it have deeper meaning than just a go-to trope for the MCU? It’s hard to say. The loss of a limb has such a peculiar energy to it as a dramatic device; it’s clearly a personal tragedy for the character, but not necessarily life-threatening (thanks to the soft-focus magic of blockbuster filmmaking, where real-life medical complications can be hand-waved away). Also, if you lose a hand or arm in the MCU and it sticks, you’re very likely either going to regrow it (see: Groot, Killian) or get a robot arm (Bucky, Klaue). And robot arms are cool.

Even beyond the casual disposal of limbs, though, the MCU is a hotbed of Star Wars references — though always limited to the original trilogy. It’s a recurring theme in our exhaustive guide to the MCU and pop culture, as you can see plotted out in the chart below (click to enlarge): 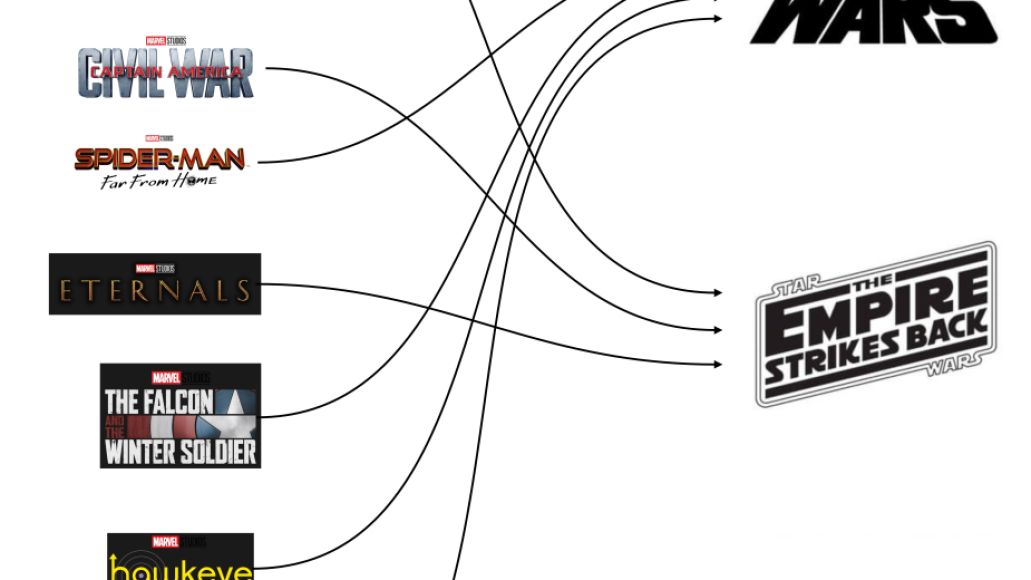 One of the great running gags of the Tom Holland Spider-Man films is the repeated destruction of a LEGO Death Star that Peter Parker and his best friend Ned (Jacob Batalon) may never now finish building. (However, as we see in the final moments of No Way Home, Peter has held onto the LEGO Palpatine figure, perhaps as a token of hope that he might eventually be properly reunited with his pals.)

Also, even before he got his own official MCU movie, we’d already learned that Peter is enough of a Star Wars fan to use the AT-AT battle on Hoth for inspiration in bringing down Ant-Man (Paul Rudd) in giant form. (Peter does refer to Empire Strikes Back as “that really old movie,” which is uncool, but this iteration of the character was born in 2001, 21 years after the premiere of Empire. So maybe we’ll let it slide.)

While it still feels a little weird to have Eternals making jokes about Batman and Superman, the inclusion of Star Wars as an established presence within the MCU somehow feels right. Of course Star Wars would be a thing in this universe, because it’s impossible to imagine a universe without it. (Even in the hot dog fingers universe, the existence of Star Wars seems like a safe bet.)